On October 29th, 2019, the Global X Cybersecurity ETF (BUG) began trading on NASDAQ. BUG seeks to invest in companies that could benefit from increased adoption of cybersecurity technology. Companies include those whose principal business involves developing and managing security protocols to prevent intrusion and attacks on systems, networks, applications, computers, and mobile devices.

As the world becomes digitized, protecting valuable and sensitive data is increasingly essential. Technology improves productivity by bringing tangible items into the digital world and automating manual processes. However, as more items and processes leave the physical world and enter the digital realm, it opens the door for new types of crime. Damages from cybercrime could cost the world $6 trillion annually by 2021, prompting individuals, companies, and governments to spend fortunes engaging with cybersecurity firms to provide sophisticated software and services to protect proprietary data.1 As such, we believe cybersecurity is a powerful theme that will be further propelled by the growth of tangential areas that produce, utilize, or offer connectivity to data, such as machine learning, cloud computing, and the internet of things. 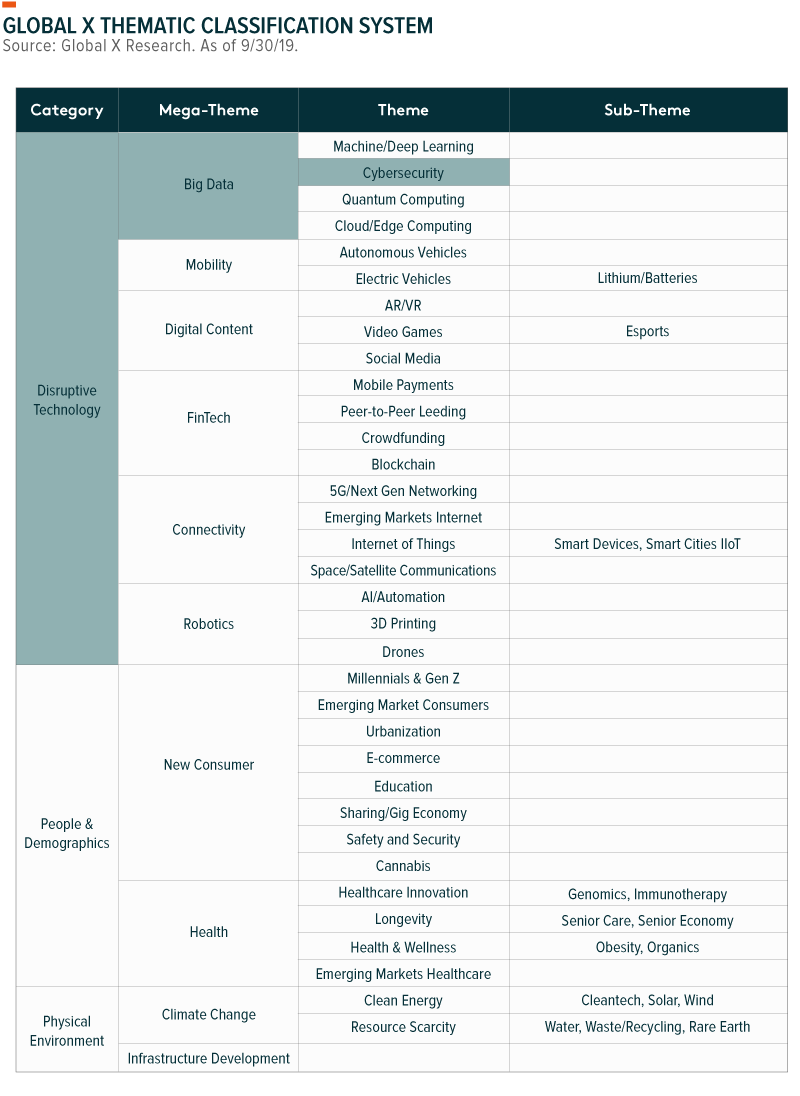 The Rise of Big Data

Not too long ago, file cabinets full of alphabetized folders stored critical information like addresses, health records, and financial statements. Then came computers and the internet, establishing a new digital paradigm that began to capture and store vast amounts of information in 1’s and 0’s. Seemingly overnight, technology made data readily available at the click of a mouse. Yet it didn’t stop there. Turning old data from physical records into digital ones was the first phase, but now, virtually everything we do leaves behind a digital trail: what we purchase, what we watch, who we talk to, and where we go are captured by various platforms. According to one estimate, the world generates more than 2.5 quintillion bytes (2.5×1018) of data every day, or equivalent to 90% of all data generated during the last two years.2 For another perspective, in 2020 the world is set to generate 40 times more bytes of data per day than the number of stars in the observable universe.3

Furthering this explosion in data is the emergence of a handful of digital technologies, including: 1) the internet of things, which is connecting everyday devices from dishwashers to TVs to the internet to collect and transmit data; 2) cloud computing, offering cheap, scalable, and efficient data infrastructure services that lowers the barrier for firms to become more data-dependent; and 3) machine learning and artificial intelligence, which makes data more valuable than ever before as insights can be discovered from vast data sets. 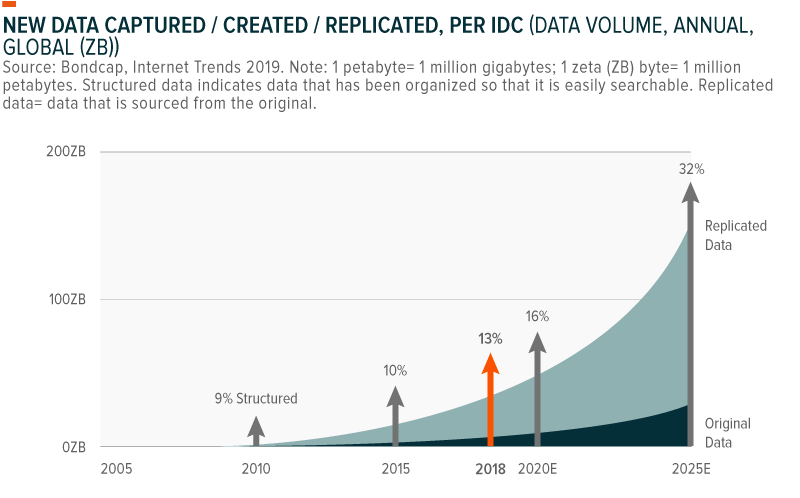 But as more valuable data is created, cybercriminals become increasingly motivated to steal it and sell the data on the black market, hold it for ransom, or expose private information. Most commonly, cybercriminals use digital means to steal proprietary or private data, intellectual property (IP), and money. Yet as technology evolves, so too will the cyberthreats. For example, as the internet of things connects everyday objects to the internet, it creates new avenues for cybercriminals to operate. Hacked traffic lights, stolen cars, or manipulated personal health devices are now all in the realm of the possible.

A single cybersecurity company can block over 100 million threats per day.4 That’s equivalent to more than one thousand threats blocked every second. But all it takes is one breach to cause severe damage for companies and users.

In 2013-14, Yahoo! had all 3 billion of its accounts hacked in two separate attacks, arguably the worst data breaches of the 21st century. The breaches exposed names, email addresses, birth dates, telephone numbers, passwords and security questions of users. Somewhat troublingly, Yahoo! confirmed the attacks in 2017, 3–4 years after the events actually happened.

In 2017, Equifax, one of the largest credit bureaus in the US, announced a data breach that affected 143 million consumers, including social security numbers, birth dates and driver’s license numbers. In late 2018, Marriott International announced a data breach that compromised 500 million accounts, including personal information like passport numbers.

Typically, external actors are the culprits of cybercrime. In the Yahoo! case, state-sponsored-actors were responsible, which is not uncommon; hackers sponsored by foreign governments account for about 23% of global breaches.5 Organized crime accounts for another 39% of data breaches.

But external actors are not the only concern. Internal breaches occur as well, committed for personal or financial gain, and sometimes simply the result of human error. 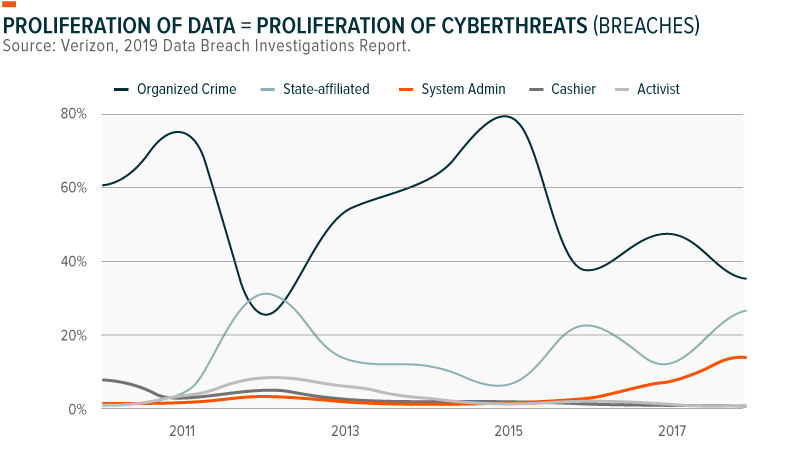 An Ecosystem of Solutions is Needed

Defending against cyberthreats is an industry. Cybersecurity services focuses on protecting all levels of a network, including gateway, identity, email, cloud, web security and endpoints. The techniques cybersecurity companies use to combat unauthorized and malicious activity vary, and can include any one or, more likely, combinations of the following:6

We expect proactive prevention mechanisms will evolve to include artificial intelligence (AI) and machine learning (ML) approaches. AI and ML can help with phishing detection, recognizing fake websites and links that attempt to look as legitimate. Progress in visual recognition technology is another area where AI and ML can assist next generation cybersecurity companies detect potential threats. Of course, for AI and ML mechanisms to evolve, they need access to large amounts of data, including malignant data like malware for training purposes.

Cybersecurity is one of the fastest-growing segments of IT spending. Chief Information Officers (CIOs) across the US consistently rank cybersecurity as their top spending priority.7 And it’s understandable why companies can spend millions on cybersecurity: in 2019, the average total cost of a data breach for a company is $3.9 million, with 36% of the cost coming from the loss of customer trust.8

Global spending on security-related software, hardware and services could reach $124 billion by year-end as the number of malicious programs registered reaches a record 925 million.9,10 By 2022, total global spending could reach $170.4 billion, a five-year compounded annual growth rate (CAGR) of 10.9%.11 Given the proliferation of cyberthreats, cybersecurity is now often viewed as a cost-savings measure for organizations who fear the costs and fallout of an attack.

Likewise, government spending on cybersecurity implementations continues to grow. The EU General Data Protection Regulation (GDPR), which went into effect in May 2018, calls for personal data to be processed in a manner that ensures security, protection and transparency.

In the U.S., cybersecurity is a priority and regulators continue to work toward GDPR-like legislation. The 2019 federal budget includes $15 billion for cybersecurity, a $583.4 million, or 4.1% percent, increase over 2018.12 Cybersecurity is a state-level issue too. California passed a digital privacy law in 2018 that grants people control over their data. Such legislation creates a sense of urgency on the corporate side to enhance their cybersecurity promptly and avoid any potential scandals. 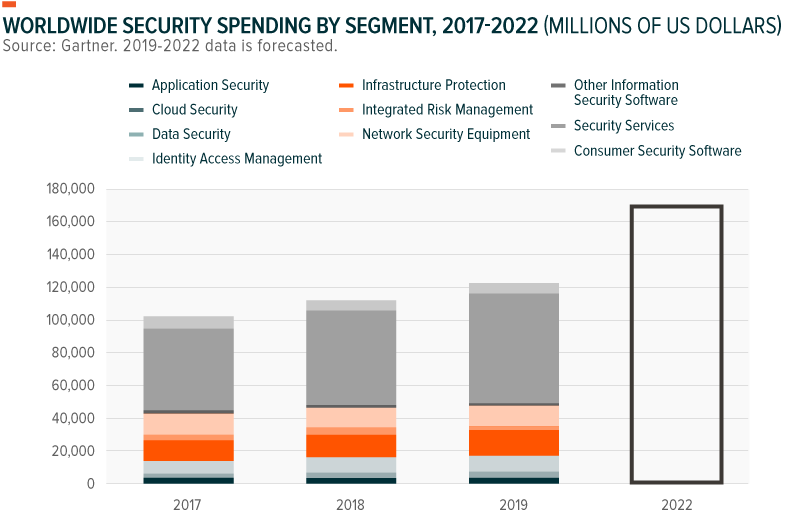 Digital transformation across all industries implies that cybersecurity capabilities can’t be reactive. Proactive security is a must. Preventing data breaches from happening could mitigate undesired economic and political ramifications. The millions of daily, increasingly complex, cyberthreats speak to the opportunity for cybersecurity companies to continue to see greater demand for their services. Given its central role in protecting firms, consumers, and government bodies around the world, cybersecurity seems positioned to capitalized on more robust security and privacy measures and policies.

BUG: The Global X Cybersecurity ETF seeks to invest in companies that could benefit from the increased adoption of cybersecurity technology. Companies include those whose principal business involves the developing and managing security protocols to prevent intrusion and attacks on systems, networks, applications, computers, and mobile devices.

4. Note: Figures retrieved from Zscaler Cloud Activity Dashboard (accessed on 10/11/2019) – This is a live tool and data varies constantly.

6. Note: Cybersecurity Taxonomy developed by the Language Technologies Institute at Carnegie Mellon University. Only the Technical Aspects of Cybersecurity have been considered for the classification. Accessed on Oct 15, 2019.

7. IDC, “Developing Your Security Fabric: A Transformational Approach for State Government,” May 2019.

Investing involves risk, including the possible loss of principal. The investable universe of companies in which BUG may invest may be limited. Cybersecurity Companies are subject to risks associated with additional regulatory oversight with regard to privacy/cybersecurity concerns. Declining or fluctuating subscription renewal rates for products/services or the loss or impairment of intellectual property rights could adversely affect profits. The Fund invests in securities of companies engaged in Information Technology, which can be affected by rapid product obsolescence and intense industry competition. International investments may involve risk of capital loss from unfavorable fluctuation in currency values, from differences in generally accepted accounting principles or from social, economic or political instability in other nations. BUG is non-diversified.

Shares of ETFs are bought and sold at market price (not NAV) and are not individually redeemed from the Fund. Brokerage commissions will reduce returns. Global X NAVs are calculated using prices as of 4:00 PM Eastern Time. The closing price is the Mid-Point between the Bid and Ask price as of the close of exchange. Closing price returns do not represent the returns you would receive if you traded shares at other times.