Preferreds are considered hybrid securities because they possess characteristics of both fixed income and equity securities. Like bonds, they are yield-bearing instruments that typically pay a fixed distribution to investors. They are often issued at a par value, assigned credit ratings, and do not have voting rights. Like equities, however, preferreds trade daily on a stock exchange, have the opportunity for price appreciation or depreciation, can have their dividends suspended, and fall in the lower portion of a firm’s capital structure.

Yet within this asset class, not all preferreds are the same. Many have embedded features that can impact yield, duration, and maturity, like optional call dates, scheduled coupon resets, and more.

In this piece, we’ll focus on the variable rate preferred segment of this asset class, including discussing how this low duration corner of the preferred market could play an important role in reducing interest rate sensitivity for income-oriented portfolios. 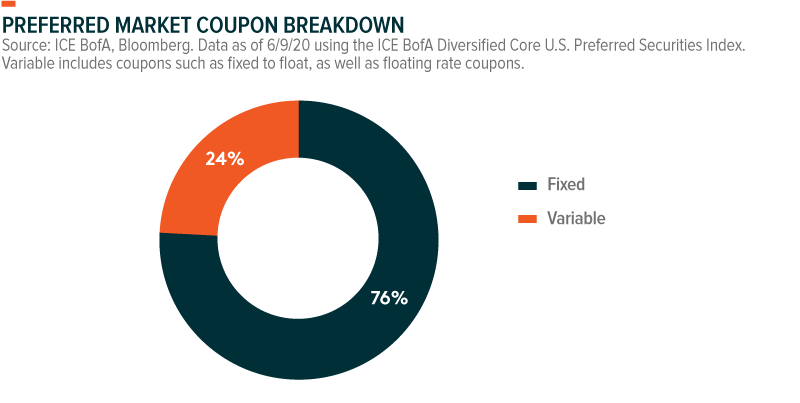 Whether floating or fixed-to-float, these variable rate preferreds can play an important role in investors’ portfolios as a low duration income-oriented asset class. Alongside other debt instruments that reset their coupons based on interest rates, like senior loans and floating rate treasuries, investors can use variable rate preferreds to reduce the duration, or interest rate risk, of their portfolios. This can be a particularly important feature during a rising interest rate environment, where investors are likely looking to reduce their portfolio’s duration.

Fixed rate preferreds, on the other hand, tend have higher duration due to their often perpetual nature. While this can provide a tailwind for performance in a falling rate environment, it can be a headwind in a rising rate scenario. 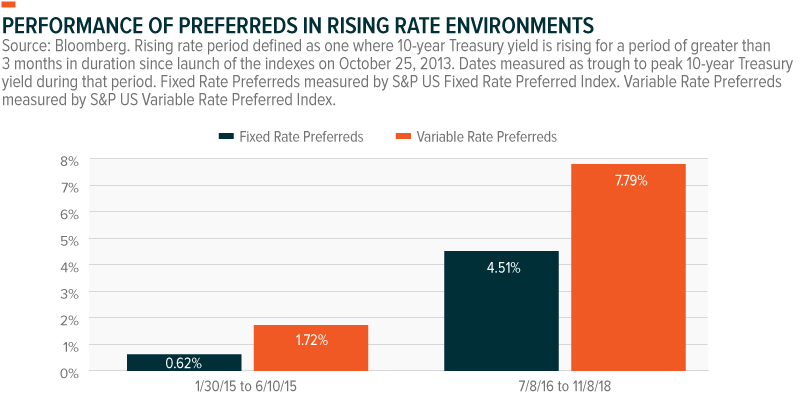 How to Use Variable Preferreds In a Portfolio

Variable rate preferreds can play useful role in income-oriented portfolios. First, the high income nature of the preferred asset class means they can often improve the overall yield of a portfolio. In this capacity, they are often found alongside other high yielding asset classes like junk bonds or emerging market bonds. It’s important to note high yielding securities can be riskier. Investors should look to balance these risks in a portfolio. 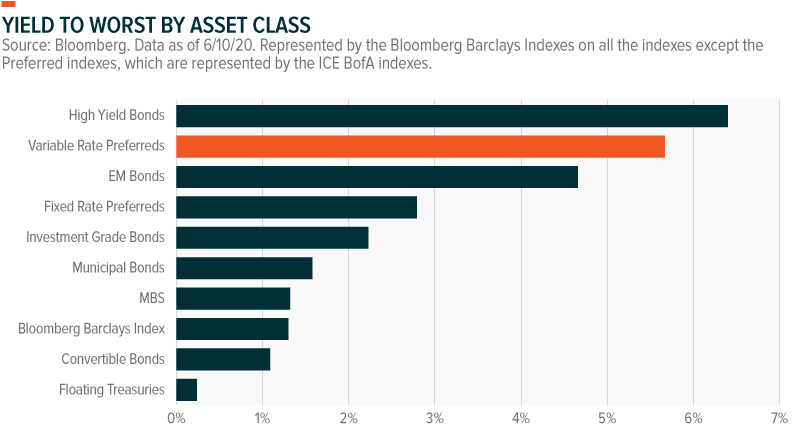 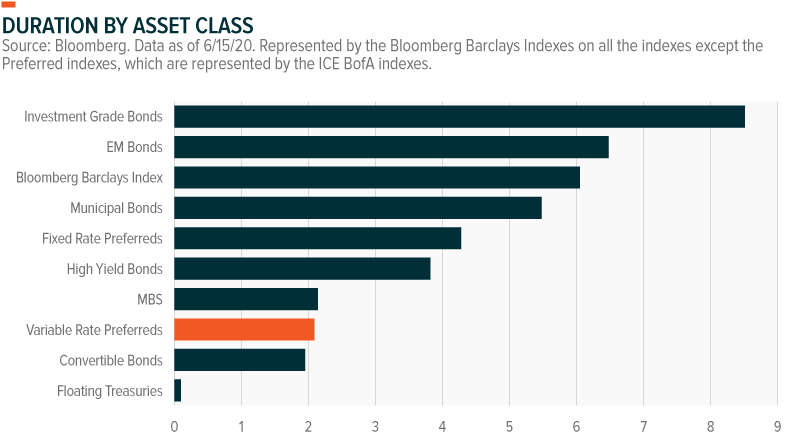 The macro environments best suited for variable rate preferreds, relative to broad fixed income benchmarks, are when interest rates are low or rising, or when credit spreads are tightening.

Low Rate Environment: When interest rates are low, investors tend to struggle to find meaningful yield for their portfolios. Given their higher yield nature, preferreds in general could provide an important source of income to a portfolio, often exceeding the yield of investment grade bonds. In a low rate environment, however, variable rate preferreds may be particularly useful as investors may want both high current yield and to mitigate the risk of rising rates in the future.

In light of COVID-19 and the economic fallout from the pandemic, interest rates around the world are at extreme lows. The Federal Funds Rate in the US is set to 0-0.25%, and other major central banks, like the ECB and the Bank of Japan have set rates at or below zero. While interest rates are unlikely to rise soon, they also appear to have little room to fall further.  Assuming interest rates are at least stable for the near term, investors may enjoy the high yielding coupons from variable rate preferreds in meantime. If the global economy begins to improve, we could see credit spreads tighten and interest rates begin to normalize at higher levels, an environment ripe for variable rate preferreds to potentially outperform traditional fixed income instruments. 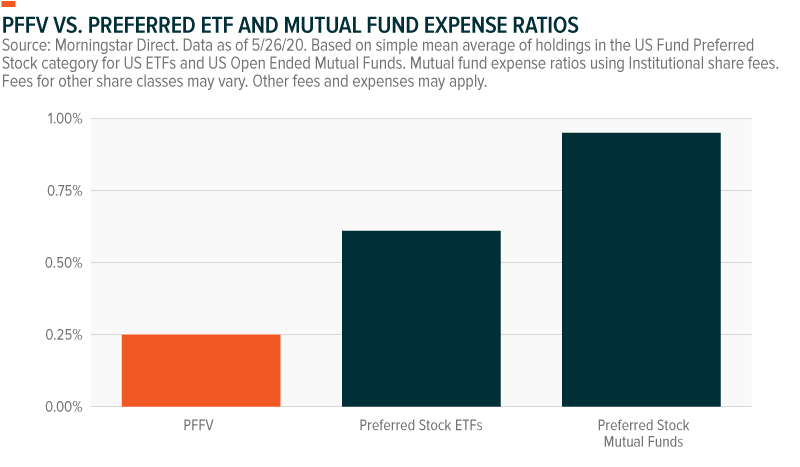 2. Measured by the Bloomberg Barclays US Agg Index.

Investing involves risk, including the possible loss of principal. Preferred stock is subject to many of the risks associated with debt securities, including interest rate risk. In addition, preferred stock may not pay a dividend, an issuer may suspend payment of dividends on preferred stock at any time, and in certain situations, an issuer may call or redeem its preferred stock or convert it to common stock. High yielding stocks are often speculative, high-risk investments. These companies can be paying out more than they can support and may reduce their dividends or stop paying dividends at any time, which could have a material adverse effect on the stock price of these companies and the Fund’s performance. PFFD is non-diversified.