The news cycle shifted quickly from covering a labor shortage to rounds of layoffs. Although the U.S. labor market remains strong, cracks are starting to show with the number of news stories mentioning the term “layoffs” exceeding 2020 levels.

The strength of the labor market provides important information to investors from several perspectives:

Most industries have experienced an increase in labor costs. However, as reflected in the graphic, service industries such as leisure and hospitality faced sharper wage increases due to a labor shortage as the economy reopened from COVID-19 lockdowns last year. The supply chain crunch in 2021 also contributed to rapid hiring in the transport industry, which accelerated wage growth. As a result, employment costs in cyclical sectors rose well above pre-pandemic levels. Revenue did not keep pace with the growth in operating costs, which has weighed on earnings this year. 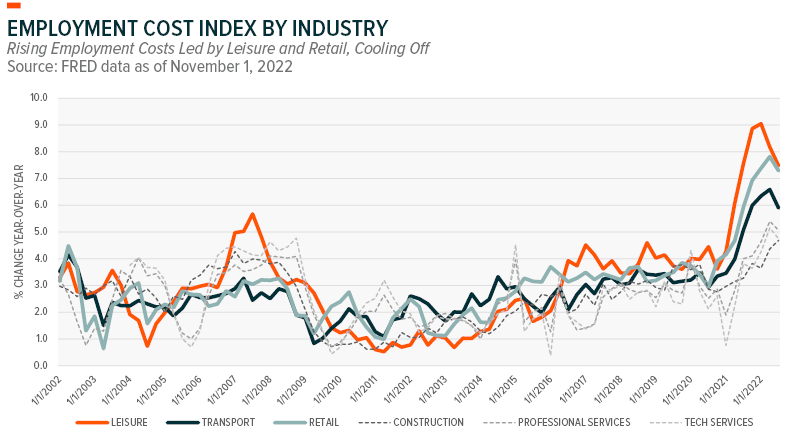 Q3 earnings were generally better than expected, although cyclical sectors such as Industrials, Materials, and Communication Services had the most earnings misses. Overall, companies have reported revenues that are 2.5% above estimates, which is above the five-year average of 1.9% and above the 10-year average of 1.2%, according to FactSet data. But the cost side of the equation continues to rise, contributing to the fifth straight quarter of declining corporate margins and below average EPS beats (Q3 earnings exceeded EPS estimates by 1.8% versus the five-year average of 8.7%).1

The Rising Tide of Layoffs

Weaker economic growth could accelerate an earnings contraction, especially as more companies announce job cuts. So far this year, service industries such as Automotive, Leisure, and Retail have seen more job cuts compared with last year, according to data from Challenger, Gray & Christmas. Even white-collar jobs have been cut, particularly in technology and financials. And news mentions of layoffs and job cuts rose in November as more companies cited business closures, cost-cutting, and declining economic conditions as key reasons for scaling back this year. 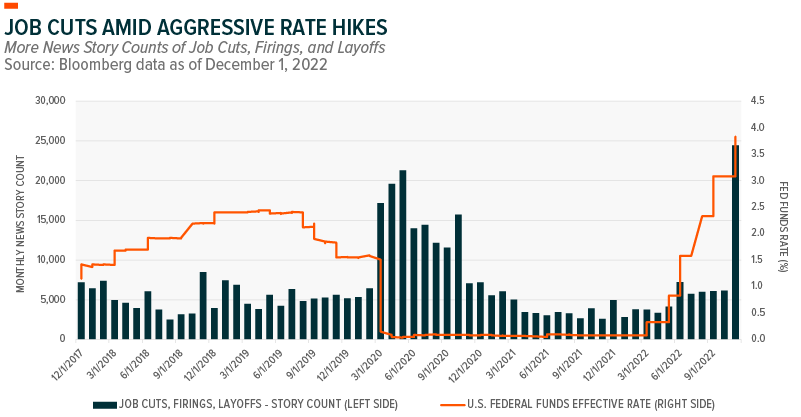 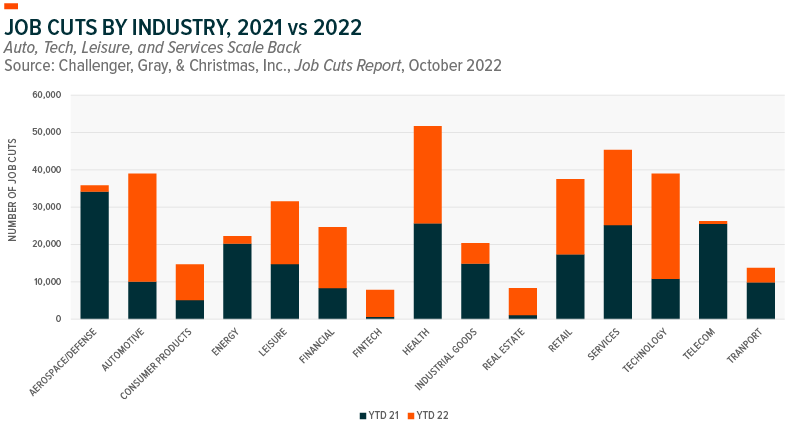 Wages could decline as the job market cools. Private hiring increased by 127,000 jobs in November, well below 239,000 in October. Employee pay rose 7.6% from a year ago, versus 7.7% in October, according to the November ADP report. And wages are not keeping up with inflation, which could weigh on consumption. Workers may have less cash to spend next year as pandemic savings dwindle. Personal savings rates have already decreased to their lowest level since 2007, while credit card debt levels have risen.2

Market is Sensitive to Earnings Beats and Misses

Equity markets are increasingly sensitive to earnings announcements. So far, Q4 earnings growth expectations have fallen from 9.1% in June, to 3.9% in September, and -1% in November, led by Materials, Communication Services, and Consumer Discretionary.3 The decline in earnings expectations could keep volatility elevated, which typically occurs when the economy shifts from late cycle to recession.4

On a positive note, companies that have reported positive EPS surprises have seen a larger price increase than average. In Q3, companies that beat earnings estimates saw a 2.4% price rise two days before and after their earnings release date, which is much larger than the five-year average price rise of 0.9% during the same time window.5 However, companies that reported negative earnings surprises in Q3 witnessed a significant price decrease, especially in Communication Services.

We expect cyclical sector earnings to continue to disappoint as recession risks rise. Although less companies have mentioned “recession” in Q3 earnings calls compared with Q2, 67% of S&P 500 companies have issued negative guidance, above the five-year average of 60%, according to FactSet data. And on the sector level, Financials, Industrials, Real Estate, and Consumer Discretionary companies had the highest mentions of “recessions” in Q3 earnings calls, albeit lower than Q2 levels.

Positioning During an Earnings Contraction

The outlook for corporate profits is deteriorating, and conditions could get worse before a recovery takes place. The labor market is already cooling, which lowers employment costs, but increases recession risks. The level of job openings per unemployed persons is starting to decline, which typically leads to slowing wage growth. The employment cost index, which measures the total change in the cost of labor, peaked in Q2 on a year-over-year basis. And jobless claims have risen over the past month (employment data cited from the U.S. Bureau of Labor Statistics, as of November 2022).

Corporate margin expectations remain high despite the weaker economy. Q3 margin weakness was notable in Financials and Materials, while Energy margins were above their five-year average, boosted by high oil prices, according to FactSet data. In previous cycles, a trough in S&P 500 margin estimates has occurred around market lows.

There is a silver lining. Over time, right-sizing staffing could lead to productivity gains, bolstering the case for quality sectors that produce stable earnings growth.

Our sector views table below provides more detail on sector positioning and the current tailwinds and headwinds for each sector.