Millennial Consumers Primed to Reshape the US Economy

While demographic trends are rarely surprising, the enormity of their impact can often be overlooked. For example, over just the last few years, the Millennial generation has evolved, aging from primarily a cohort of cash-strapped students to that of a major share of the US workforce and a powerful consumer group. And like a glacier carving out the side of a mountain, Millennials are slowly, but surely making an indelible mark on the world’s largest economy.

While the media often likes to portray a stereotypical image of Millennials, in this piece we will dive into the facts: who are Millennials really, how have they changed, and how they could impact the US economy.

Millennials, defined as those born roughly between 1980-2000, are about to see the oldest of this age group turn 40, with the youngest closing in on 20 years old. This generation, numbering approximately 90 million, has overtaken the Baby Boomers as not only the largest generation in the US, but also the largest share of the labor force and the most educated. Representing 35% of the labor force today, Millennials are expected to be 75% of US workers by 2030.1 Around 40% have a bachelor’s degree or greater, compared to 29% for Gen Xers and 25% for Baby Boomers, when they were the same age.2 In addition, Millennials are set to inherit an estimated $30 trillion in wealth from the Baby Boomer generation.3 In short, the combination of their size, youth, education, and inheritance set up Millennials to become the driving consumer force for the US economy for many years to come. 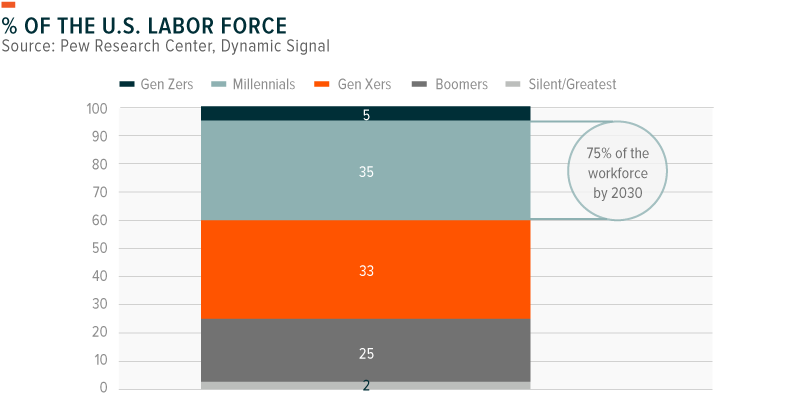 How Have They Changed?

Like any generation, Millennials are evolving over time, and while doing so, are shedding many of the stereotypical traits that have been previously attached to this generation. Below are examples of a few shifts that have occurred in just the last three years, corresponding with Millennials largely finishing school, entering the workforce, and even starting families.

What Does this Mean for the US Economy?

Millennials are steadily reaching new stages of life that often correspond with higher levels of consumerism: entering the workforce and starting families. This can have a meaningful impact on the economy in two ways: first, Millennials are spending money in certain categories that other generations are not. While Baby Boomers may be dialing back their overall consumption and increasing their spending on health care, for example, Millennials are directing an increasing share of their income towards home ownership, savings, and consumer goods. Second, Millennials have unique consumption preferences from prior generations, such as a particular affinity for leveraging technology, seeking experiences, and prioritizing health and wellness. Our belief is that the firms that operate at the intersection between the major spending categories of where Millennials are spending money and their unique consumption habits and preferences are well-positioned to benefit from this major consumer shift. Conversely, companies that are unable to appeal to Millennial preferences are likely to suffer.

While broad demographic shifts take time, their impact can last for decades and have large implications on broad swaths of the economy. At this moment, we are still in the early innings of the rise of the Millennial consumer, as the generation enters prime working age, forms households, and increases its purchasing power. As this shift intensifies, we believe that it is wise to consider Millennial spending patterns and the companies and industries that are best positioned to capitalize from this secular growth opportunity.

MILN: The Global X Millennials Thematic ETF seeks to invest in companies that have a high likelihood of benefiting from the rising spending power and unique preferences of the U.S. Millennial generation (birth years ranging from 1980-2000). These companies come from a broad range of categories, including: social media and entertainment, food and dining, clothing and apparel, health and fitness, travel and mobility, education and employment, housing and home goods, and financial services.

Investing involves risk, including the possible loss of principal. The investable universe of companies in which MILN may invest may be limited. The Fund invests in securities of companies engaged in Information Technology which can be affected by rapid product obsolescence and intense industry competition. International investments may involve risk of capital loss from unfavorable fluctuation in currency values, from differences in generally accepted accounting principles or from social, economic or political instability in other nations. MILN is non-diversified.

Carefully consider the Fund’s investment objectives, risks, and charges and expenses before investing. This and other information can be found in the Fund’s summary or full prospectuses which may be obtained by calling 1-888-GX-FUND-1 (1.888.493.8631), or by visiting globalxfunds.com. Please read the prospectus carefully before investing.