Don’t fight the Fed, as the saying goes. But at this point, it’s reasonable to ask how much fight the Federal Reserve (Fed) has left. The Fed played an oversized role in stimulating markets over the past decade and became an indefinite backstop. But what’s the line in the sand that the Fed will not cross in terms of support for the market? And how could monetary policy influence fiscal policy, and vice versa, at his point in the cycle? For asset managers in 2020, these are essential questions following a year in which central bank support was a major factor in driving record market performance.

Below, we look at monetary and fiscal policy and the factors that could determine their trajectories. In 2020, we expect a lower level of overall support for the market than in 2019. However, we don’t expect the market’s party to end until interest rates rise meaningfully. In line with this, we expect risk assets to continue to show resilience.

The Tools to Influence Economic Activity 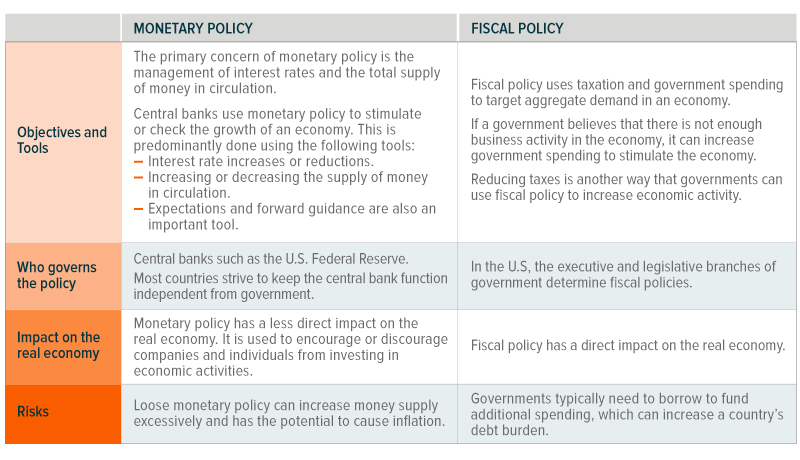 The 2010s featured extraordinary central bank intervention or monetary policy in the aftermath of the 2008 financial crisis. The prevalence of cheap debt and ample central bank liquidity sent markets soaring as the crisis turned to recovery. A decade-plus removed from the throes of the crisis, we can now see that markets rely on—and expect—support.

2019 showed that the market’s addiction to whatever-it-takes monetary policy is not an easy thing to kick. In October 2019, the Fed started purchasing Treasury bills at a clip of $60 billion per month due to liquidity concerns in the Repo market in mid-2019. These purchases are likely to continue into the second quarter of 2020.1 Interestingly, the Fed does not refer to this as quantitative easing (QE), given the purchase of Treasury bills rather than bonds. We find that to be semantics—the Fed is providing liquidity and the markets have reacted positively.

The scale of central bank support was one of 2019’s biggest surprises. Last year, central banks around the world collectively increased their balance sheets by about $100 billion per month. The extra liquidity boost likely affected risk-taking as it worked to reduce market volatility.2 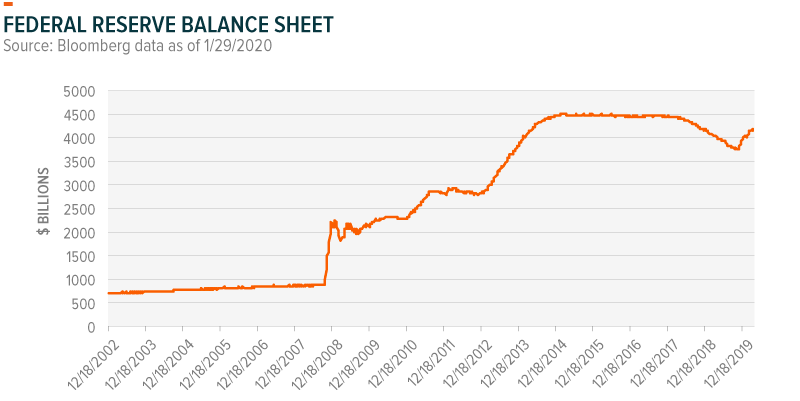 Fed Still Has Some Tools, But Economic Growth a Concern

In the U.S., the underlying strength of the economy is a concern even as the longest equity bull market in recorded history chugs on. With policy rates at 1.50–1.75%, the Fed is in a much stronger position to combat a decline in economic growth than most developed countries, where negative yields abound. QE, expectations and forward guidance are the main levers that central bankers can still deploy.

But leaning on expectations could be risky. Currently, forward expectations is one of the Fed’s largest tools. If central bankers remove expectations of support, we expect that it will be far more costly to reinstall later.

Cheap Money May Not Be So Cheap

Currently, the global market value of negative interest rate debt is almost $14 trillion. While this is a substantial improvement from its high of $16.8 trillion in August 2019, there is a long way to go to eliminate this market anomaly. 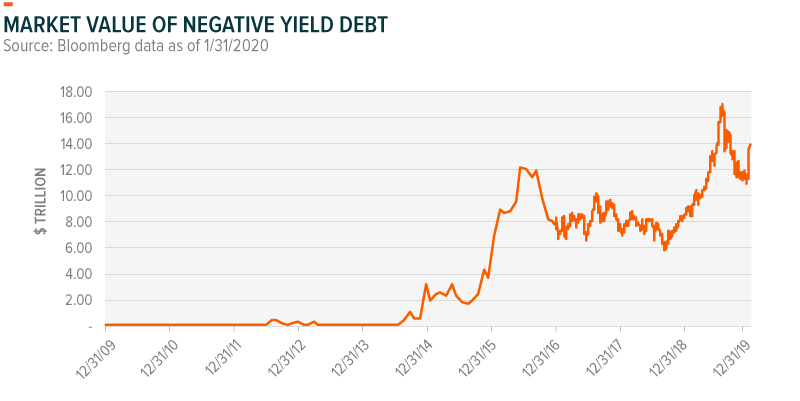 Cheap money affects the opportunity cost of capital. A risk is that companies increase leverage or invest in projects that only make sense at low costs of capital. Despite the length of the current cycle, a capex boom has yet to occur. Instead, companies have used share buybacks to a scale not previously seen. While buybacks are a fair use of capital, their prevalence reflects concern about underlying economic growth.

Notably, the longest market expansion in history is also the slowest of any post-war expansion. U.S. real GDP has increased at an annualized rate of just 2.3% since June 2009.3 The same cannot be said for valuations. Valuations on risk assets are markedly higher due to the low interest rates, subdued market volatility and, maybe, just because there are limited other places to deploy cash.

At 3.6%, U.S. unemployment is near its lowest level in 50 years.  However, wage growth remains subdued, meaning not everyone has benefited from this record expansion. Stark divergences between rural and urban areas, and between skill levels, are evident in the post-Financial Crisis era. Employment rates for low skilled workers in urban areas have recovered steadily, but, unlike prior cycles, the recovery has barely reached rural areas.

Similarly, the lower-skilled segment of the labor market, which is the most sensitive to the business cycle, only recently started to benefit from rising wages. As a result, the divergence in labor market recovery has likely played a meaningful role in the aggregate wage dynamics within the current expansion.4

The rise of the gig economy, outsourcing and just-in-time scheduling over the last decade is also significant. The gig economy is characterized by labor flexibility including short-term contracts or freelance work rather than permanent positions. While excellent for corporate efficiency, the downside of these labor innovations is the shifting of certain risks from company to employee. Many workers are potentially underemployed and in positions with lower job security. These factors adversely affect the underlying strength of the economy and dampen the effects of inflation that typically accompanies full employment.

The growing force of populism globally could usher in a new era for fiscal policy dominance and more deregulation.5 In the U.S., corporate tax cuts helped propel the market. The potential for an infrastructure bill could provide another boost.

However, any talk of further tax cuts is likely just election promises, given budget constraints. In 2019, the U.S. had a $1.109 trillion budget deficit.6 The deficit is much higher now due to the 2018 tax cuts reducing revenue while spending on military and unfunded mandatory spending has continued to rise. The budget deficit relative to GDP has deteriorated for three consecutive years. In 2018, this deficit was 3.8%. The deficit is smaller now than during the Financial Crisis, but it has yet to return to its pre-crisis level. Currently, the U.S. federal debt to GDP ratio exceeds 100%. 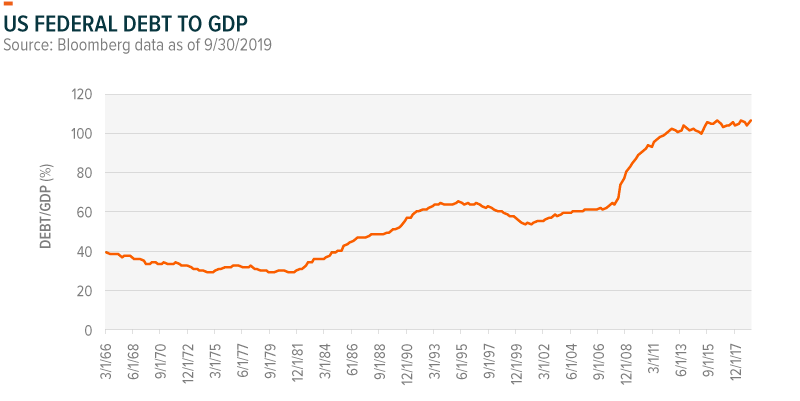 The deficit issue is not unique to the U.S. In 2018, global debt increased to a record 230% of GDP. Over the last five decades, we can identify four waves of debt accumulation. The latest wave, which started in 2010, is the largest, fastest and most broad-based expansion in debt.7 Low interest rates mitigate some of the risks associated with rising debt levels; however, concerns are starting to build.

The debt burden limits the ability of countries to use fiscal stimulus. Fiscal stimulus is a topic of conversation in Europe and Japan, but budget constraints mean it’s unlikely to amount to much more than talk. For the Eurozone, a shift away from budget austerity would require changes in EU budget rules. Following a decade of austerity, the region’s budget deficit relative to GDP has improved. In 2018, the deficit was 0.5%, compared to 6.2% in 2010, well within the 3% stipulated by the EU. However, debt relative to GDP is a potential constraint. In 2018, debt to GDP for the Euro Area was 87.9%, well above the required 60%, but still a large improvement from its peak of 93% in 2015.8

Is There a Need to Balance Monetary and Fiscal Policy?

Current conditions suggest that the Fed can afford to maintain its accommodative monetary policy. Doing so would help sustain the recovery and allow a broader segment of the population to benefit from the strong labor market. In line with this, the Fed is expected to remain on hold in 2020.9

The synchronized monetary easing from 2019 should continue to support the global economy due to the lagged effect of monetary policy. Most developed markets are running out of room to maneuver using interest rate reductions. Emerging market (EM) central banks still have some room to cut rates; however, with the Fed on hold, these central banks are more likely to hold off.10

In line with this, fiscal policy is becoming a more important tool for helping the economy remain at full employment. When interest rates are low but consumers and businesses hold back from investing, there are potential benefits to fiscal policy helping to integrate the extra liquidity into the actual economy.

Additionally, should economic growth decelerate, the global economy may require more direct fiscal stimulus. According to the International Monetary Fund (IMF), there is minimal room for monetary policy to combat further growth declines. In the IMF’s view, countries with fiscal space should raise spending on initiatives that increase productivity growth to support demand if necessary.11 But without greater consideration for increased debt burdens, fiscal stimulus is unlikely to play a decisive role in market performance over the next few years.

At current valuations, we believe that the market requires some support. Monetary policy, increased fiscal policy or improved corporate capital expenditure could all help the real economy. While the Fed is likely to remain on hold this year, the lagged impact of monetary policy means that the benefits of 2019’s monetary easing should continue in 2020. Additionally, we believe that rhetoric from the Fed should, out of necessity, remain reassuring. In line with this, we expect that monetary policy will take more of a back seat while continuing to be supportive.

Stemming from budgetary constraints and divided government, we expect fiscal policy to predominantly remain on the sidelines. In line with this, we are expecting the overall level of support from monetary and fiscal policy to be lower in 2020 than in 2019. Despite this, we expect the market to remain resilient due to the continued monetary policy backstop.

2. Morgan Stanley, 2020 Outlook: On the Markets: The Next Stage of Global Reflation, January 2020

5. Morgan Stanley, 2020 Outlook: On the Markets: The Next Stage of Global Reflation, January 2020