Recession fears and an accelerated Federal Reserve (Fed) interest rate hiking trajectory weighed on markets during the second quarter, resulting in the weakest first half performance since 1970.1 Supply shocks and robust U.S. consumer demand kept inflation and the Fed in the spotlight. But higher inflation and the sharp rise in yields are taking their toll, with consumer and manufacturing data beginning to show signs of deterioration.

The unwinding of easy liquidity took air out of both equity and fixed income markets with the S&P 500 Index and Bloomberg U.S. Aggregate Bond Index declining -16.1% and -4.7%, respectively in Q2, while dropping -20.0% and -10.4%, respectively during the first half of 2022. U.S. equity markets underperformed international, and particularly emerging markets in Q2, as China’s reopening provided potential for improvement. The MSCI World ex U.S. Index returned -14.7% while the MSCI Emerging Market Index returned -11.4%, boosted by a +3.4% return from the MSCI China Index in Q2.

As economic growth slows, we expect the balance between inflation protection, quality, and defensive positioning to increase in importance. Companies with strong balance sheets and health cash flows are likely to be better positioned to weather the storm. At this point in the economic cycle, fundamentals are essential.

According to Bank of America analysis, global profit expectations are at their weakest point since the Global Financial Crisis of 2008, increasing the risk of a profits recession.2 As profit and margin pressure increase, companies may need to right-size employee numbers in line with reduced demand and expectations for slower economic growth in 12 to 18 months. While the labor market remains tight, there are some signs of slowdown, as layoffs have risen, and some companies are rescinding job offers.3

U.S. consumers entered the current period in a stronger position, with excess pandemic savings. However, those savings are only likely to support higher spending for a limited period.4 Additionally, should manufacturing and employment data slow, consumers may become more cautious, reducing discretionary purchases.

Recession warning bells are also ringing internationally, with Europe’s economic growth reliant on the supply of Russian gas, China’s reopening remaining at risk of further lockdowns, and the Japanese yen under pressure. These independent risk factors may become trigger factors that could adversely impact global and U.S. economic growth.

The sharp increase in U.S. Treasury yields maintained the focus on interest rate sensitivity during Q2. Maintaining the trend from Q1, this focused attention on dividends, profitability, and valuations – favoring value rather than growth while also supporting larger, more well-established companies. During Q2, the Russell 1000 Value Index and Russell 2000 Value Index took the lead with a decline of -12.2% and -15.3%, followed by the Russell 2000 Growth Index and Russell 1000 Growth Index with a decline of -19.3% and -20.9%, respectively.6

Growth stocks are more sensitive to interest rates than economic prospects. Should the interest rate environment improve while economic growth deteriorates, growthier sectors such as Technology may look more appealing during the recovery.

Energy and Defensives Take the Lead

All 11 GICS sectors declined during Q2, with only four sectors providing declines in the single digits. Consumer Staples (-4.6%), Utilities (-5.1%), Energy (-5.3%), and Health Care (-5.9%) took the lead with defensive sectors providing some refuge as recession fears rose. Despite being highly cyclical, the Energy sector benefits from higher energy prices as major economies shift supply agreements away from Russian oil and gas. The Energy sector is one of few areas that stand to benefit from this inflation pressure that has implications throughout the economy.

Inflation pressures, particularly in food and energy, have reduced real disposable income, forcing consumers to prioritize staples over discretionary purchases. Personal consumer expenditure increased 0.2% m/m in May, half the gain expected by markets and reflecting a decline of -0.4% when adjusted for inflation.9 The personal savings rate increased marginally in May to 5.4%. This followed a trend of lower savings since early 2021 as consumers increased spending and depleted some of their excess pandemic savings, reducing the savings rate to the lowest levels since 2009.10

Higher than expected May inflation data reset interest rate expectations for the second half, keeping the Fed in focus and weighing on growthier market segments. This contributed to Consumer Discretionary (-26.2%), Communication Services (-20.7%), and Information Technology (-20.2%) being the weakest sectors in Q2.

The short end of the yield curve increased dramatically during Q2, with policy interest rates starting the quarter at 0.5% and rising in two large Fed interest rate increases to end the quarter at 1.75%. The long end of the curve has since flattened and inverted in portions. The 10-year Treasury yield had a wild ride during the first half: starting the year at 1.51% and increasing rapidly to end the first quarter at 2.338% and the Q2 at 3.0129%. Interest rate expectations ramped up for the second half and interest rate volatility reached a fresh peak in June after CPI inflation data exceeded expectations, with headline inflation reaching its highest level in 40 years. The Fed is expected to increase policy rates to around 3.5% by the end of the year, its highest level since 2008.11

Resetting yields back to pre-quantitative easing (QE) levels will likely be a painful process for markets. Higher Treasury yields and reduced liquidity has implications across asset classes, and this combination has and likely will continue to result in a higher correlation between equities and fixed income. On average, since 2000, equities and bonds offered a negative return correlation. However, from the late 1970s until 2000, equities and bonds typically had a higher correlation. Year-to-date correlations are back to pre-2000 levels, creating near term headwinds for multi-asset portfolios. 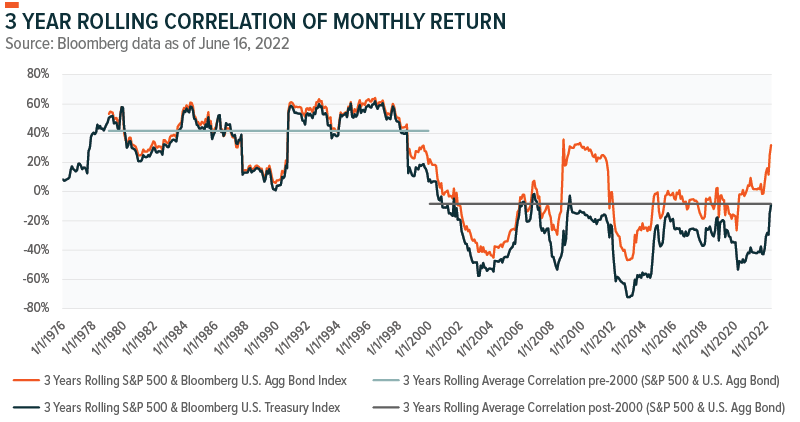 The Fed’s commitment to bring inflation under control creates headwinds for equities and fixed income. However, as recession risks rise, fixed income, especially Treasuries, may outperform equities.12 This was evident during Q2 with the Bloomberg U.S. Aggregate Bond Index holding up better than the S&P 500 Index despite rising interest rates. This reversed the performance ranking from Q1 and brings fixed income to the better performing asset class in the first half.

With the increased focus on safety, short duration Treasuries have held up the best. Recession fears and equity market volatility pushed up credit spreads, adversely impacting the performance of both investment grade and high yield corporates.

The conflict in Ukraine increased geopolitical risks while having implications for globalization, currencies, inflation, cybersecurity, and climate change. Combined with higher interest rates, these factors contributed to the equity risk premium rising during the first half.13 While the higher discount rate weighed on equity markets, the conflict and its impact on commodity supplies established a new era of security. In our view, this scenario creates key portfolio positioning opportunities focused on three key security areas: energy security, food security, and cybersecurity.14

Commodities typically perform well during inflationary environments; however, they’re sensitive to economic growth. In our view, energy is favorably positioned relative to metals. Energy demand continues to outpace supply and global inventories are low. Another factor keeping supply limited is a long cycle of under-investment in commodities. Morgan Stanley estimates the global oil undersupply is likely to be around 1 million barrels a day for the rest of 2022. Conversely, metal demand is typically sensitive to Chinese demand.15 Overweight Energy sector exposure is a way to protect against the impact of higher energy costs elsewhere in a portfolio.

While the war increased the short-term focus on these three key areas, we believe they remain important focus areas longer-term.

The current environment is a balancing act for investors. Concerns about elevated inflation pressures, but also slowing real economic growth. This is a time that calls for focus on inflation protection while scaling back on cyclical exposures and increasing defensive positioning.

Please also refer to our Second Half Outlook for more perspective into the views expressed in this report.

Russell 1000 Index: The large-cap market index consists of the largest 1,000 markets in the Russell 3000 Index.

Russell 2000 Index: The small-cap market index consists of the smallest 2,000 markets in the Russell 3000 Index.