Growthier segments of the market came under pressure as investors began prioritizing shorter duration, current profitability, and dividend income. About 75% of the Russell 1000, the 1000 largest U.S. companies by market capitalization, have negative year to date returns1 and about two-thirds are trading below their 200-day moving average.2 While some valuation declines are justified, others could be solid entry points into oversold opportunities. This month we searched for such opportunities by looking at growth companies that exhibit current positive and forecasted higher profitability.

First, let’s define the growth spectrum that companies can fall into when investing in this style of equities. 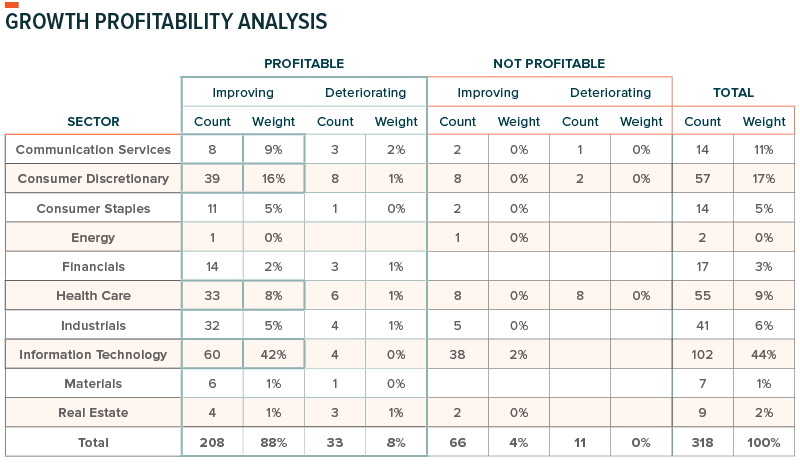 One layer deeper, from an industry perspective, the industries that contributed the most to the positive and improving segment were:

Finally, we ranked performance from best to worst for the Russell 1000 into quartiles. Out of the 147 growth companies that are both profitable and improving, as well as have positive expanding margins, only 19 of them are in the first quartile for performance. 23 are in the second quartile, 56 are in the third quartile, and 49 are in the fourth quartile. If equity valuations are based off future earnings, then current valuations, combined with forward expectations don’t seem aligned. This may create entry points into what could be oversold opportunities.

In conclusion, even though the current market environment seems to favor more value focused, dividend paying companies, there are still opportunities available for investors to identify profitable growth companies. Selectivity is key, because while certain sectors may show profitability, if one takes a deeper dive on an industry level, certain industries in that sector are likely driving profitability while others are detracting from it.

Analyzing margin expansion may help identify industries that are more affected by supply chain issues and inflation pressures. This helps establish broader views on different sectors and segments of the market. Please see below for our current sector views.