Sector Views: The State of the U.S. Consumer

Inflation and rising interest rates create an uphill journey for the consumer and the economy. U.S. real disposable income has been declining since mid-2021. Although nominal wages are rising, real average hourly wages have been in negative territory for the last 12 months. Real retail sales are starting to reflect these headwinds. Given that consumption accounts for around 68.7% of U.S. nominal GDP, the state of consumer affects far more than just the consumer-focused sectors, with economic growth being closely related to demand for Materials and Energy as well as impacting the Industrial, Financial and Real Estate sectors.

End of the Easy Money Era

Over the last month, the economic tail risks have shifted from the Russia-Ukraine war to global recession concerns and more hawkish central banks.1 According to BofA’s Michael Harnett, the inflation shock is worsening while the interest rate shock has only just begun.2 Gone are the days of free money. Treasury yields rose quickly in response to stronger commitments from the Federal Reserve (Fed) to regain control of inflation. The implied policy rate for after the December FOMC meeting has risen to 2.8%, after starting the year at 0.8%. Additionally, the 10-year real Treasury yield is close to 0% after two years in negative territory.3 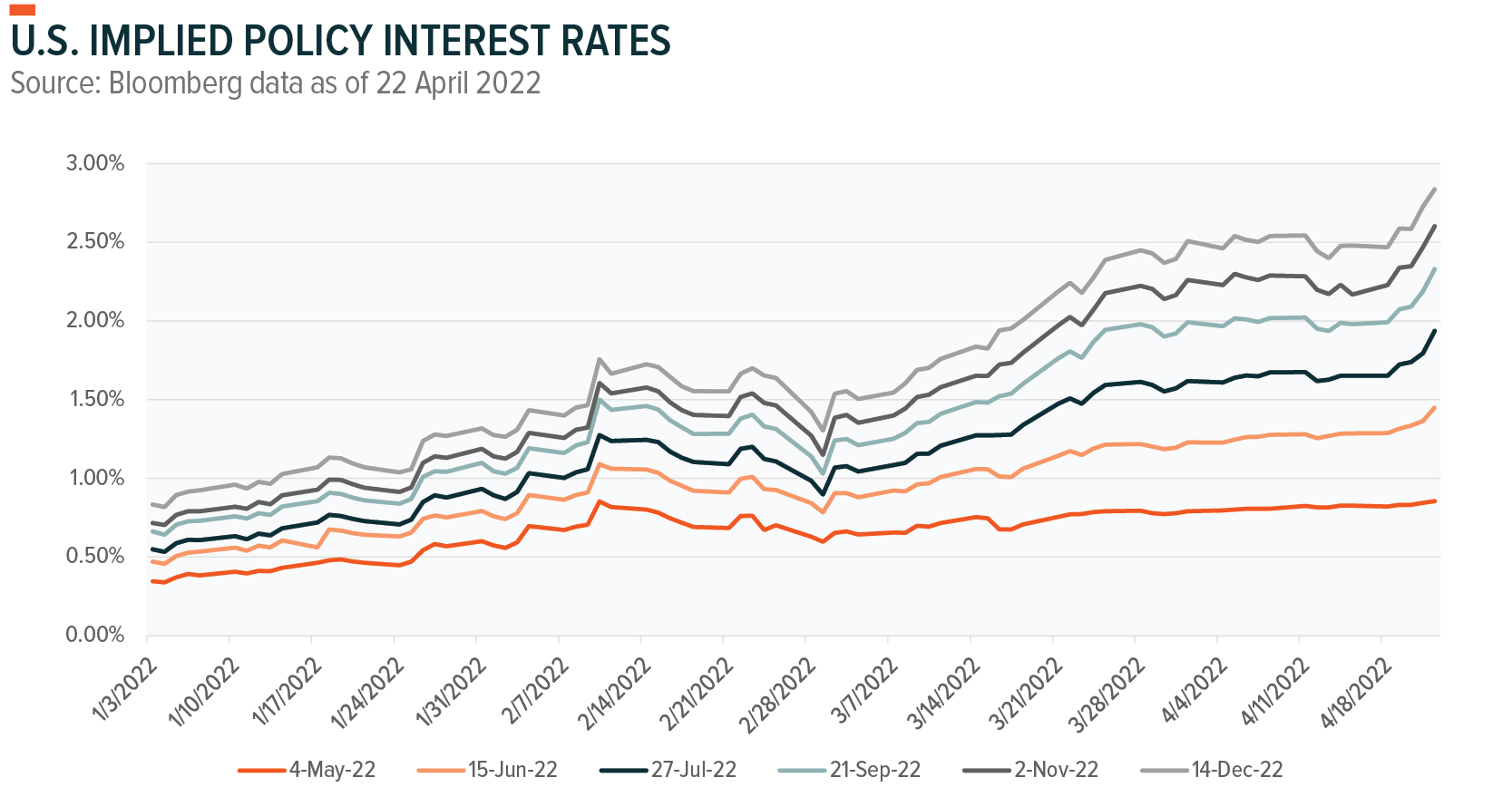 Spending patterns are impacted by borrowing costs, with the Fed using higher yields to help reduce demand. This impact is likely to be amplified by the declining trend in real average hourly earnings as wage growth lags inflation.

Consumer price inflation (CPI) was initially expected to peak around March 2022. We expect CPI inflation to remain elevated for the next few months due to the extended war in Ukraine, worse than expected lockdowns in China and higher than expected producer price inflation (PPI). With strong underlying consumer demand, firms have generally been able to pass along higher prices. Overall, companies expect further price increases in the coming months as input costs continue to rise.4 But as lower real disposable income and higher borrowing costs weigh on spending, companies may face more margin pressure. Currently consumer spending is skewed towards goods. As demand normalizes back towards services, demand for goods may weaken just as companies rebuild inventories and supply-chain bottlenecks start to alleviate. This could dampen the profitability of goods-producing companies.5

Stimulus provided a savings cushion and boosted consumption and retail spending over the last year. Though it should be noted that the personal savings rate has declined to 5.4%, its lowest level since 2013.6 Against this backdrop, it is not surprising that retail sales growth has begun to slow, rising 0.5% m/m on a nominal basis in March while declining 0.7% when adjusted for CPI.7

Bank of America card spending data reflects that consumption remains robust across income groups, growing 23.2% on a 3-year basis. Despite higher energy prices, lower income consumers are showing spending resilience. Though this could reflect short lived revenge post lock-up spending. But it’s worth noting that sales purchased on credit cards have increased over the last year while debit card sales declined.8 Overall, credit card debt bottomed in January 2021 and has just surpassed pre-pandemic levels.9 According to the Beige Book, there has been a weakening of financial conditions; however, loan demand has remained strong.10 In line with this weakening, during Q1 earnings season certain banks started to increase provisions against loan losses. This may reflect the economic challenges faced by cyclical sectors as real economic growth slows.

Year-to-date, equity market volatility spiked with expectations for higher Treasury yields and the Russia-Ukraine war, but generally there has been an uneasy calm in equity markets. The correlation of excess returns between S&P 500 Index and different sectors reflects the market’s focus on defensive positioning, inflation protection and concerns about higher interest rates. 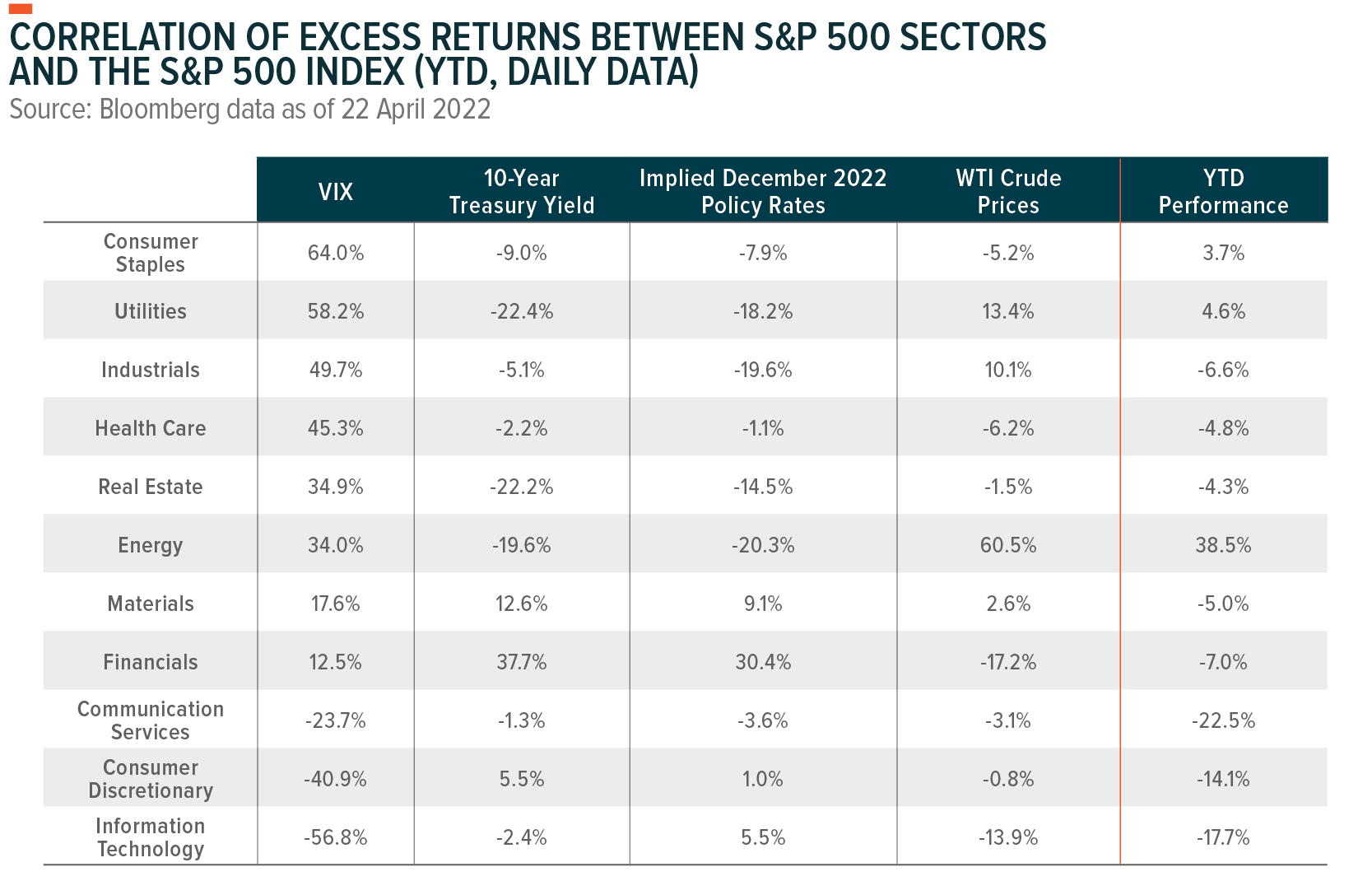 Our sector views table provides more detail on sector positioning and the current tailwinds and headwinds for each sector.

Consumer price inflation (CPI): CPI measures the average change in prices that consumers pay for a defined basket of goods and services.

Producer Price Index (PPI): The index measures the change in the price of goods as they leave their place of production.

VIX: The Chicago Board Options Exchange SPX Volatility Index, commonly referred to as VIX, reflects a market estimate of future volatility, based on the weighted average of the implied volatilities.