Should Portfolios Contain Gold and Silver?

Last year, we wrote “Is It Time to Add Gold and Silver to Your Portfolio” against the macroeconomic backdrop of rising trade tensions, geopolitical risks, and dovish central banks – an environment which made precious metals an attractive asset class. Today, almost all the same macroeconomic factors are not only still in play, but also exacerbated by the unexpected emergence of the COVID-19 pandemic. In this piece, we discuss the drivers behind the recent rally in the gold and silver spaces, the outlook for precious metals moving forward, and how investors can incorporate exposure to these assets in their portfolios.

Precious metals like gold and silver are non-yielding assets – they don’t pay a dividend or income to investors. When real interest rates are higher, this means the opportunity cost of holding gold and silver is higher. All else equal, an investor may prefer to buy a 10-year treasury than gold if the real yield on the 10-year is 2% and the yield on gold or silver is zero. But in the current environment, with zero or negative real interest rates, the opportunity cost for investors to hold precious metals is negligible. In fact, with negative real rates, holding precious metals may even be preferable, as no yield is better than an expected decline in real value.

In the past few months, record inflows into precious metals investment funds signaled growing demand among the investment community. Gold commodity ETFs in the U.S., for example, pulled in $7.3 billion in April 2020, the highest monthly inflow ever. In July, the same group of ETFs recorded the second-best month ever with $6.7 billion net inflows. Prior to this year, 2019 saw the largest ever annual net inflows to gold and silver commodity ETFs, totaling $10.9 billion. Through the first seven months in 2020, the category already pulled in $33.8 billion in net inflows, more than three times the record 2019 annual haul.1

In fact, global gold demand for investment purposes stands at 53.5% of total demand in H1 2020, larger than any other category by purpose, including jewelry (27.5%), central banks and other institutions (12.4%), and technology (6.7%).2 The current investor sentiment flocking to precious metals are likely to provide a tailwind for the asset class.

For silver, the demand story is a bit more nuanced than gold given that silver normally derives more than half of its demand from industrial applications, while the other half is attributed to its precious metal qualities.  As investors position their portfolios for a drop in the markets, precious metal demand for silver increases, while industrial demand tends to fall. The net effect appeared to be more negative in the early part of the year, as reflected by -16% change in silver price in the first four months of 2020 compared to +11% for gold in the same period. 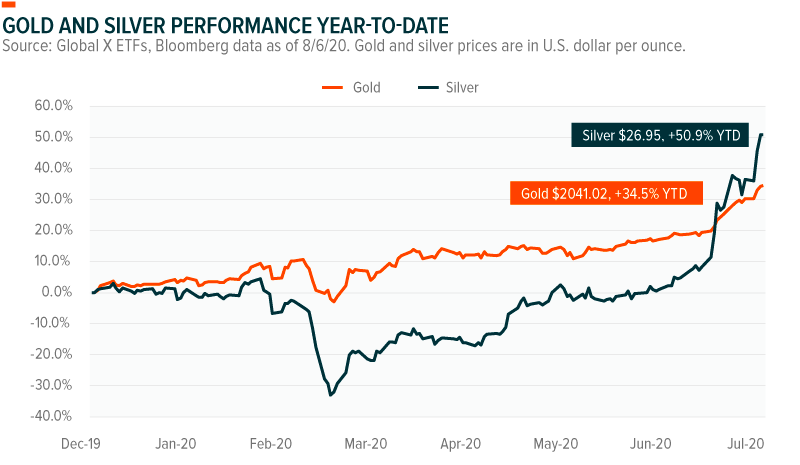 However, the more recent rally in silver – including the biggest monthly rally since 1980 – saw the metal’s price touch a six-year high and surpass gold in terms of year-to-date performance, through the end of July.

Precious metals, as a type of defensive assets due to their low correlations to traditional risk assets, can expect more demand as the U.S. dollar weakens and geopolitical risks continue to evolve. While the dollar is still about 30% higher than its Great Recession lows, it has lost nearly 10% in value since mid-March, as measured by the U.S. Dollar Index. Currently the U.S. Dollar Index is sitting at a two-year low. One might argue the utility of gold as a store of value and inflation hedge means that, by definition, its theoretical value as quoted in U.S. dollars should increase when the macroeconomic conditions lead to a weakening dollar. 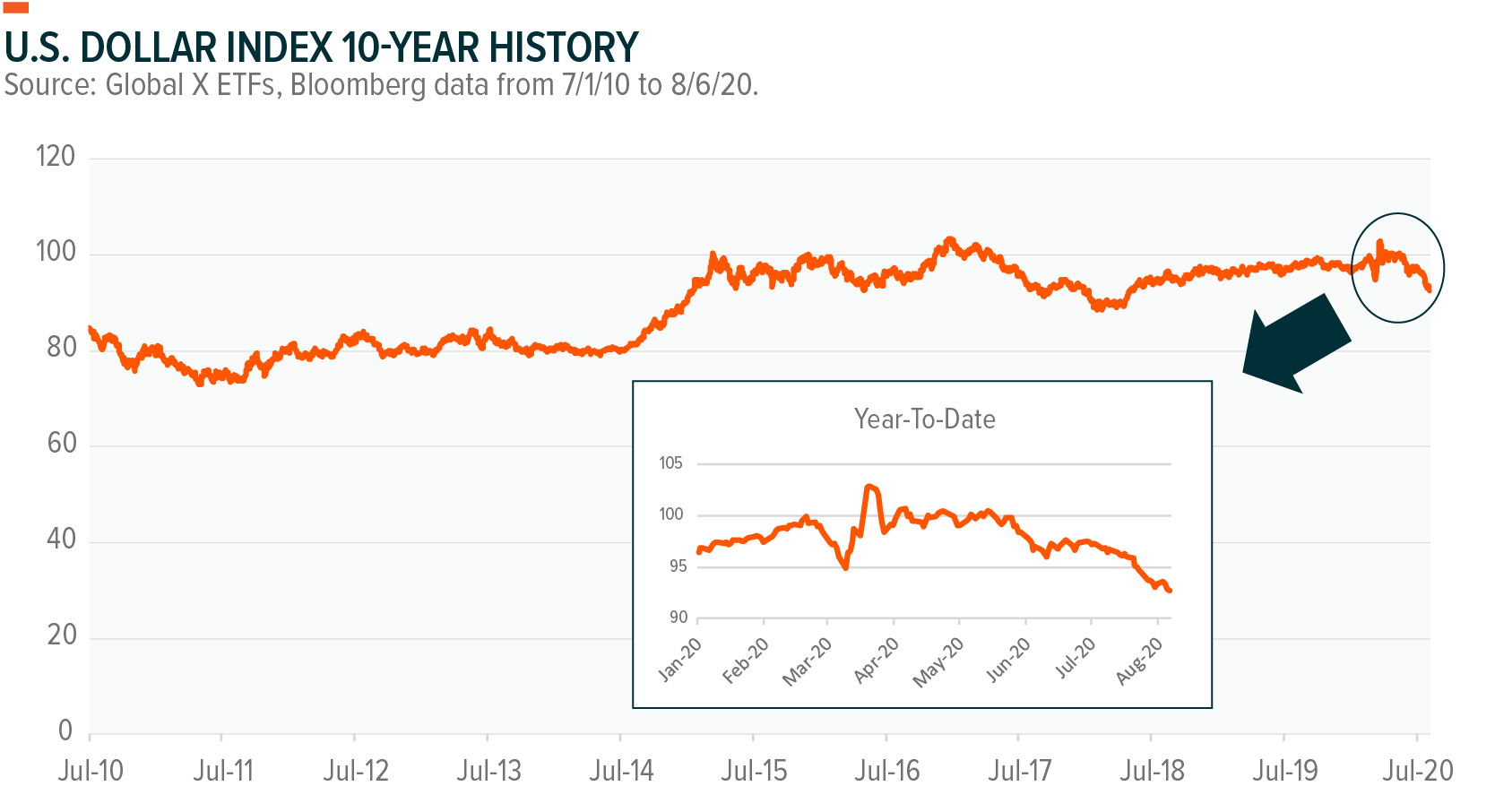 The weakness of the dollar is likely to remain top of mind for investors. To support and revive the pandemic-hit economy, the U.S. has rolled out trillions of dollars’ worth of fiscal stimulus, with more expected to come. This essentially requires more “money printing” and could potentially trigger higher inflation in years to come. Along with a near-zero interest rate policy, the Fed is expected to have an “inflationary bias” during the economic rebuild, which means a higher tolerance for inflation. The unintended consequence might just be a prolonged period of negative real rates and a depreciating U.S. dollar, both of which are seen as positives for precious metals.

Geopolitical risks further spur demand for precious metals, particularly concerns around renewed U.S.-China tensions. Within the last two weeks of July, the U.S. forced the closure of the Chinese consulate in Houston, followed by China seizing the U.S. consulate in the city of Chengdu in retaliation. Following through with his previous threat, President Trump signed an executive order on August 6 that would effectively ban the Chinese owned app, TikTok, in 45 days. The President issued the order under the International Emergency Economic Powers Act, a law that allows the President to regulate international commerce after declaring a national emergency in response to any unusual or extraordinary threat to the U.S.

Regardless of the presidential election results in November, both Democrats and Republicans appear to be toughening their stances on China, implying tensions are likely to continue. In a speech given on July 23, 2020, U.S. Secretary of State Mike Pompeo called a more assertive approach to China the “mission of our time.” While President Trump claims he’s been tougher on China than any other president, the Biden campaign says the U.S. needs to repair relationships with allies and rally the international community to form a united front against China. Undoubtedly, the U.S.-China relations have deteriorated to the worst in decades over a series of disputes, from trade and technology, to COVID-19. The clash of the world’s top two economies would give plenty of reason for markets to be concerned about inherently higher systematic risk, while defensive assets such as gold and silver could shine.

As investors wonder whether we are early or late in the precious metals rally, it may make sense to compare the relative value between gold and silver.  As we discussed previously, the gold/silver ratio measures how many ounces of silver would be required to purchase one ounce of gold, based on their current market price. The higher the ratio, the more undervalued silver appears to be relative to gold. Over the past 20 years, the average ratio is 66, but today, the ratio is still above 80, even after a strong recent rally by the metal. For this ratio to converge with its long-term average, silver would have to outperform gold substantially. 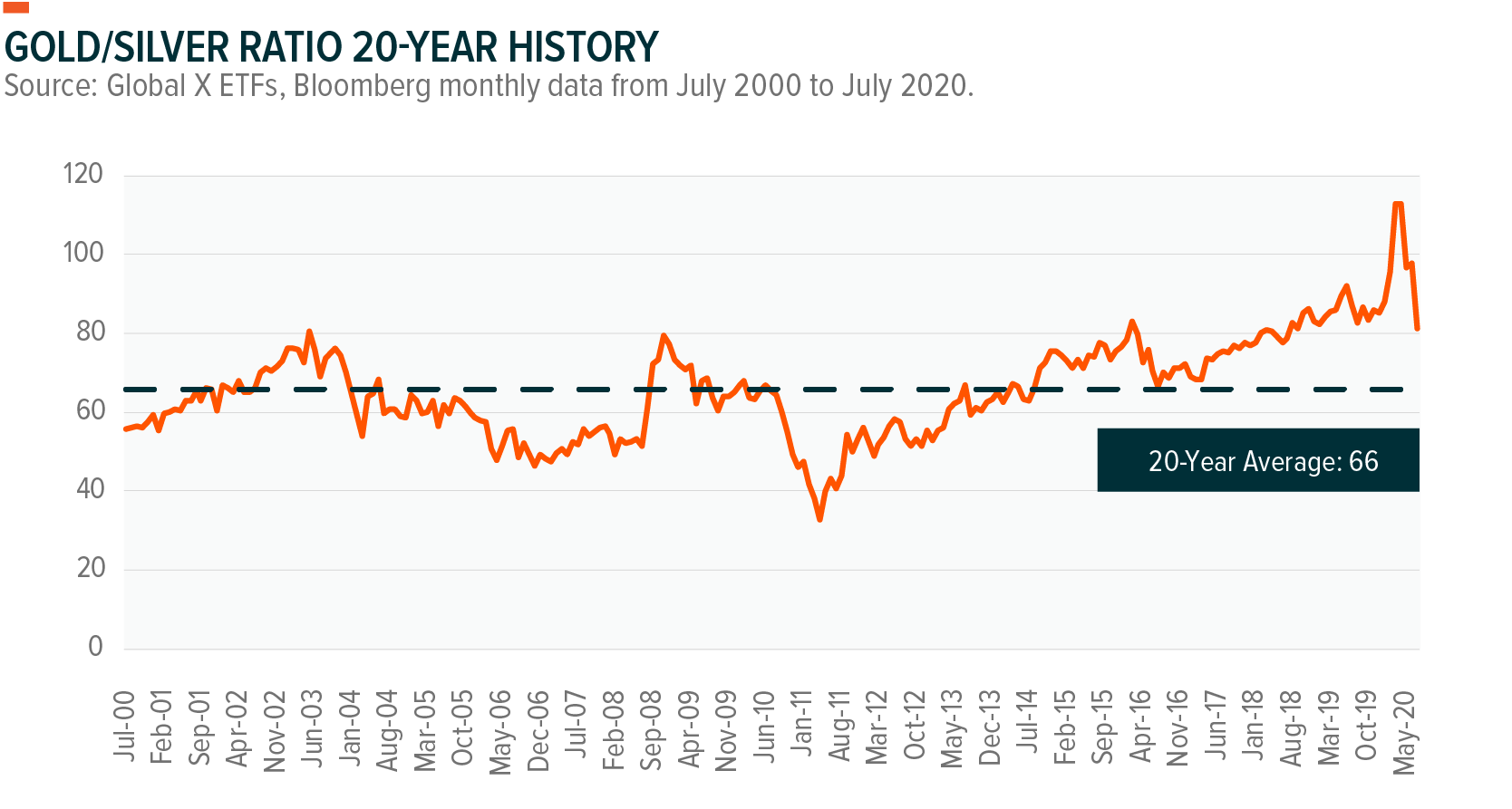 One important driver for the bullish case for silver is the disrupted supply of the commodity due to COVID-19, combined with recovering demand in key markets like China as parts of the global economy come back online.

Latin American countries – which account for more than half of global silver production – experienced two waves of mine shutdowns due to COVID-19 cases flaring up. The Silver Institute predicts a 13% decline in mined production from Latin America this year, with global supply set to shrink 7.2%.3 The Silver Institute also currently predicts a silver market deficit for 2020, the first time in the past five years.

Furthermore, keep in mind the effect of a surging silver price on restoring more overall supply is quite limited, despite the incentive a high silver price should present to producers. This is because a majority of silver output actually comes in the form of a byproduct of mining other metals, such as copper, lead and zinc. Unlike silver, these base metals prices have remained low, which means producers have little incentive to ramp up production. 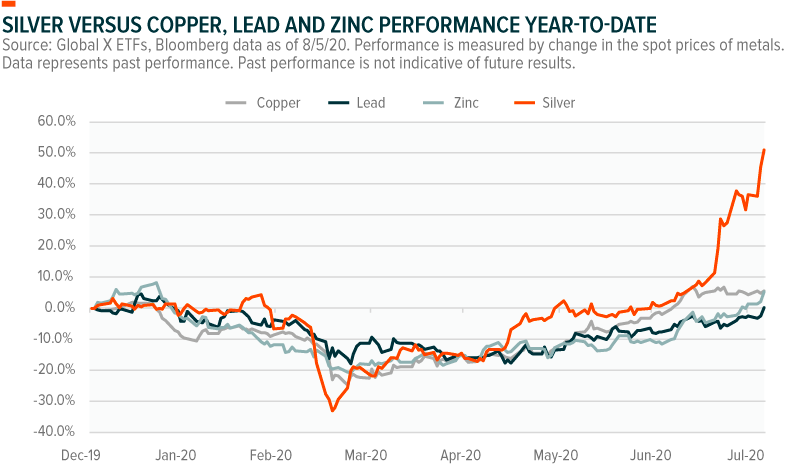 As recent flows suggest investors are increasingly considering adding precious metals to their portfolios, it is important to note that there are many implementation considerations for precious metals investing. The most common options include buying the physical commodity, using derivatives such as futures, or investing in an ETF that holds a basket of gold or silver mining stocks. The third option here gives investors leveraged exposure to the underlying metal’s price movements and potentially favorable taxation compared to physical commodity and future contracts. Stocks held for more than a year are taxed at long term capital gains rates, whereas futures are taxed at the blended 60/40 long term/short term rate, and physical metals are taxed at a 28% collectibles rate.

3. Bloomberg, “The Other Reason Silver Is Soaring: Disruptions in Latin America”, July 29, 2020

Investing involves risk, including the possible loss of principal. International investments may involve risk of capital loss from unfavorable fluctuation in currency values, from differences in generally accepted accounting principles, or from economic or political instability in other nations. Emerging markets involve heightened risks related to the same factors as well as increased volatility and lower trading volume. Global X Gold Explorers ETF and Global X Silver Miners ETF are non-diversified. Narrowly focused investments may be subject to higher volatility. There are additional risks associated with investing in silver and the silver mining industry, and gold and the gold exploration industry. Commodity prices may be influenced or characterized by unpredictable factors, including, where applicable, high volatility, changes in supply and demand relationships, weather, agriculture, trade, changes in interest rates and monetary and other governmental policies, action and inaction. Shares of ETFs are bought and sold at market price (not NAV) and are not individually redeemed from the Fund. Brokerage commissions will reduce returns.