A roughly two-week incubation period and varying degrees of symptoms make detecting the coronavirus a challenge. GenScript, a biotechnology company with a global reach, developed a multiplex protocol that can detect 2–3 genes in one reaction, accelerating the detection time of the three genes associated with the dangerous virus. The Chinese government approved several coronavirus detection kits under expedited review, and similarly the U.S. Food and Drug Administration has also approved an emergency expedited diagnostic test.

Scientists at Tufts University and the University of Vermont created the world’s first biological machines, called Xenobots. Engineered on a supercomputer and brought to life with living cells collected from frog eggs, these programmable, millimeter-wide “living machines” have potential uses across numerous verticals.1 In particular, Xenobots could disrupt medical treatment as we know it. Variants could be engineered and programmed to carry medicinal payloads to targeted areas in the human body. Other variations may serve as clean-up crews, scraping plaque from arteries or removing irregular and metastasizing cancer cells. Elsewhere, Xenobots have the potential to collect imperceptible microplastics that disrupt oceanic ecosystems. They could also help decontaminate environments laced with radioactive compounds.

Lower costs, greater flexibility, enhanced security and computing power are some of the reasons why so many companies want to grab leadership in the cloud computing spce. But with so much data coming online, there can be more than one winner in the Cloud Wars. AWS remains the market leader with more than 40% share and a roughly $40 billion annual revenue run rate. New contracts could help Microsoft’s Azure close the gap with AWS, such as the $10 billion JEDI deal it recently inked with the U.S. Department of Defense. Microsoft’s market share in the low 20% range but grew Azure’s revenues 62% in the latest quarter. Alphabet reported Google Cloud’s revenue figures for the first time on its latest earnings call, indicating that the firm has 10% market share. IBM could soon increase its cloud presence as well. New CEO Arvind Krishna previously ran IBM’s cloud business, mimicking Microsoft’s move in 2014 when appointed Satya Nadella as CEO, by then running their cloud business.

Battery manufacturers get a charge out of Tesla growth

Tesla is ramping up in its electric vehicle production with new factories in China and Europe. The company’s capacity expansion is also good news for battery manufacturers who play a critical role in the supply chain. The potential for bottlenecks in battery production has been a concern with the company. Elon Musk admits that the battery module assembly line is responsible for past slowdowns in the company’s Gigafactory in Nevada. Thus, the more batteries, the better. Panasonic, which makes batteries with Tesla in the U.S., recently announced that its battery business turned profitable. Tesla’s current installed EV capacity in the U.S. is now about 490,000, which could require approximately 27 GWh of lithium-ion battery capacity.2,3 In Shanghai, CATL and LG Chem will work with Tesla to produce batteries for the company’s Model 3s and, eventually, Model Ys.

FaZe Clan, recently ranked as the world’s fourth most valuable esports organization, secured a $22.7M convertible loan from Canadian bank Canaccord Genuity. The loan is “convertible at a pre-money equity valuation of $220M and will be used for working capital and general corporate purposes.”4 Esports is fast becoming a legitimate investment area for financiers: more than $6B flowed into esports investments in 2018 and 2019, including Artist Capital Management’s $100M Artist Esports Edge Fund.5 These investments are more than just speculative. In 2019, esports generated over $1B in revenue, according to analytics company Newzoo.6

If you build it, they will come

Many cannabis companies fell short of early sales expectations following legalization in Canada. However, Organigram CEO Greg Engel made an important point during the licensed medical marijuana company’s last earnings call. He noted that recreational cannabis sales per capita are highly correlated to the number of stores available and the proximity of stores to customers. For example, Ontario, the largest province in Canada, had only 30 cannabis dispensaries, as of the end of January.7 That’s only 2.2 dispensaries per million people in the region, compared to about 100 stores per million in Colorado, a pioneering region in terms of cannabis legalization in the U.S. Based on population levels, consumption estimates, and extrapolating dispensary density, estimates are that Ontario could support over 1,000 stores, or more than 30x current levels.

U.S. public transport ridership rose 2.2% in Q3 2019, continuing an upward trend that started in the previous quarter.8 This comes after years of decline that culminated in 2018 when ridership reached its lowest point since 2006.9 The uptick is positive for an increasingly urban world where capacity and sustainability constraints risk the viability of mass-scale private transportation. According to the American Public Transportation Association, ridership increases in the New York City Region and Washington, D.C. drove the growth. Fittingly, both areas committed to infrastructure improvements in recent years. D.C.’s railways are in the midst of a year-long, 24/7 track maintenance project and New York recently invested almost $800M in public transit infrastructure.10 The average American spends 97 hours in traffic a year, costing $87B in lost income.11 In other words, infrastructure investment is essential, as the benefits go well beyond just getting from Point A to Point B faster. 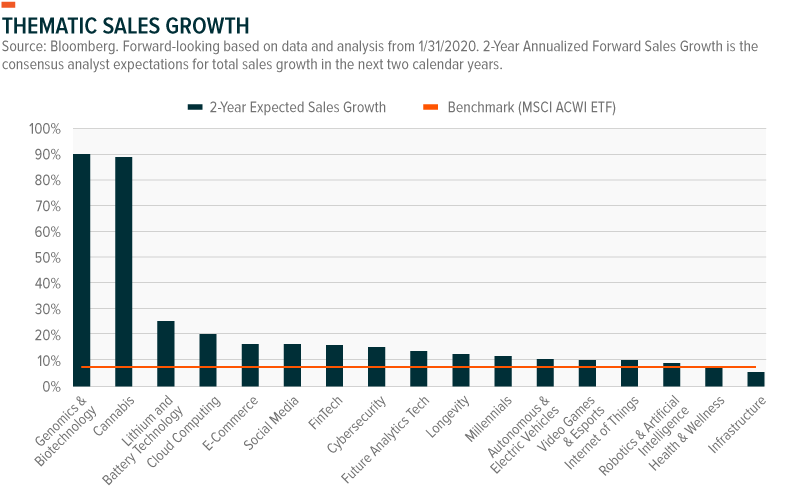 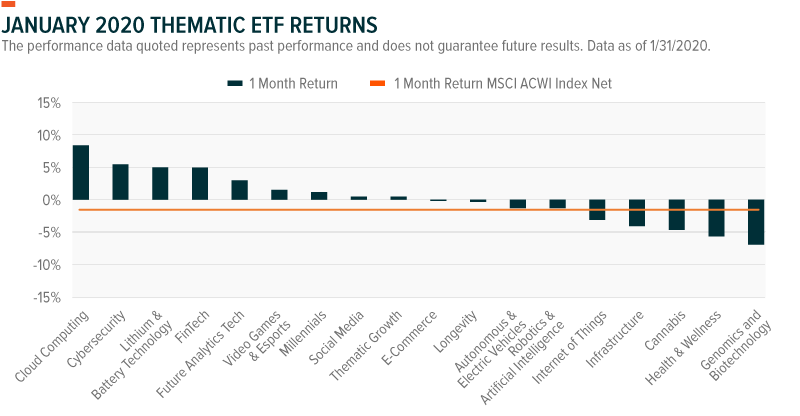 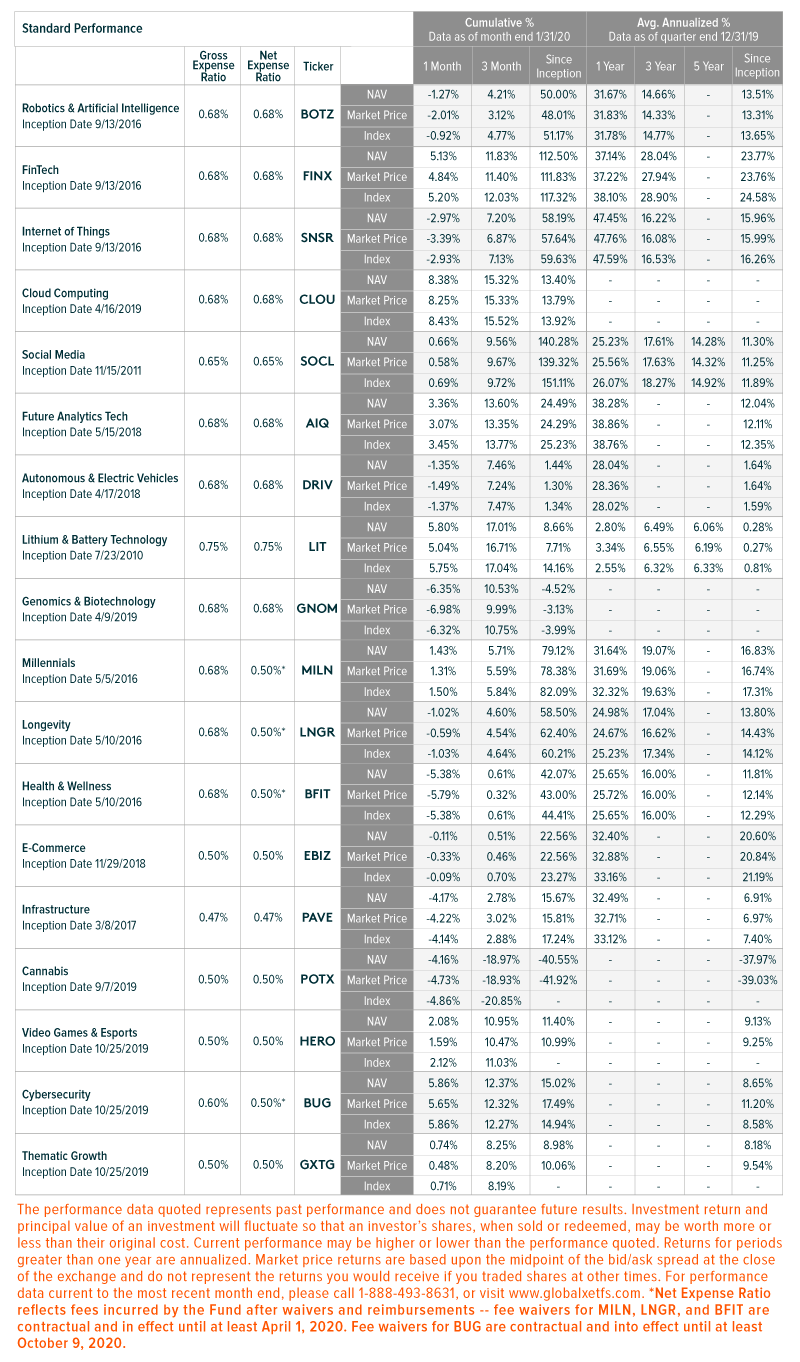 Cannabis companies are subject to various laws and regulations that may differ at the state/local, federal and international level. These laws and regulations may significantly affect a Cannabis Company’s ability to secure financing/traditional banking services, impact the market for cannabis business sales and services, and set limitations on cannabis use, production, transportation, export and storage.

The cannabis industry is a very young, fast evolving industry with increased exposure to the risks associated with changes in applicable laws (including increased regulation, other rule changes, and related federal and state enforcement activities), as well as market developments, which may cause businesses to contract or close suddenly and negatively impact the value of securities held by the Fund.  Cannabis Companies are subject to various laws and regulations that may differ at the state/local, federal and international level. These laws and regulations may significantly affect a Cannabis Company’s ability to secure financing and traditional banking services, impact the market for cannabis business sales and services, and set limitations on cannabis use, production, transportation, export and storage. The possession, use and importation of marijuana remains illegal under U.S. federal law. Federal law criminalizing the use of marijuana remains enforceable notwithstanding state laws that legalize its use for medicinal and recreational purposes. This conflict creates volatility and risk for all Cannabis Companies, and any stepped-up enforcement of marijuana laws by the federal government could adversely affect the value of the Fund’s investments. Given the uncertain nature of the regulation of the cannabis industry in the United States, the Fund’s investment in certain entities could, under unique circumstances, raise issues under one or more of those laws, and any investigation or prosecution related to those investments could result in expense and losses to the Fund.