On August 10th, 2021, the U.S. Senate passed the $1.2T Infrastructure Investment and Jobs Act across bipartisan lines (69-30), after months of deliberation. The bill features $550B of new spending, with remaining spending coming from existing infrastructure funds and repurposed funds from other areas. The bill is part 1 of 2 pieces of potential legislation drafted in the spirit of President Biden’s physical and social infrastructure agenda as articulated by the American Jobs Plan and American Families Plan in the spring. In the following, we examine the areas the bill seeks to invest in, how it would be funded, its path to getting signed into law, and investment areas positioned to potentially benefit from the bill.

BREAKING DOWN THE BILL’S INVESTMENTS1

Transportation & Transit: The Infrastructure Investment and Jobs Act would invest almost $260B of new funds across transportation and transit infrastructure. It seeks to rebuild, expand, and modernize roads, highways, bridges, public transit, airports, ports, and waterways across the country, improving their resilience to climate and obsolescence as well as their ability to facilitate commerce and travel.

CleanTech & Clean Energy: The Senate’s bipartisan bill would direct almost $90B of new federal spending to clean technologies and infrastructure supportive of a transition to clean and renewable energy sources. Within this spending is the “single largest investment in clean energy transmission in American history.”2

Digital Infrastructure & Resilience: The United States faces a growing education gap due to digital inequity, mounting cyberattacks that threaten its economy and national security, and the mounting impacts of climate change. If enacted into law, the bipartisan bill would move the needle on addressing these threats, investing over $100B across digital infrastructure areas like broadband and cybersecurity and in physical infrastructure resilience.

PAYING FOR THE BILL

The bipartisan bill seeks to fund its spending without raising the deficit through a number of creative policies which include auctioning off portions of the 5G spectrum, sales from the Strategic Petroleum Reserve, delaying Medicare expenses, increasing customs fees and taxes on chemical companies’ superfund feeds, thoughtfully removing red tape around infrastructure projects, capturing economic growth driven by the bill, and increasing tax revenue from cryptocurrency transactions by expanding the reporting requirements of cryptocurrency companies. Other spending will be derived from repurposed COVID-19 relief funds, unused federal unemployment aid, and regular infrastructure spending dollars.

The language within the cryptocurrency provision has been controversial, to say the least. It broadly defines many cryptocurrency operators as brokers subject to financial reporting and is seen by many as unworkable as the decentralized technology involves more parties than just those involved in transactions. While an amendment that sought to change the language failed to garner unanimous consent as was required in the senate due to a sole objection, it is possible, if not likely, that the House introduces a similar amendment.

Notably, there is criticism that the bill will raise the deficit, despite bipartisan agreement in the Senate that bill is fully paid for. The Congressional Budget Office (CBO) announced last week that the bill would raise the deficit by $256B.4 In response, Senate Democrats and Republicans indicated that this was expected as the CBO did not include economic growth in their calculations.

NEXT STEPS FOR THE BIPARTISAN BILL, MOVING ON TO BUDGET RECONCILIATION

The next stop for the Infrastructure Investment and Jobs Act is the U.S. House of Representatives, where it could be subject to further debate and amendments before going to a vote. Important to the timeline on passing the bipartisan bill, House Speaker Nancy Pelosi indicated that the chamber will not look at the bipartisan bill until a more sweeping budget reconciliation bill focusing on social and clean energy infrastructure is also passed through the Senate.

There is progress on the reconciliation front, however. Following the passage of the bipartisan bill, Senate Democrats voted to adopt a $3.5T budget resolution which includes $720B for education, $332B for affordable housing, almost $200B for clean energy, and $83B for science and technology, as well as funding for other areas like affordable health care.5 The Senate’s passage of the resolution moves them a step closer to passing a budget reconciliation bill along party lines that would enable such spending (without needing bipartisan support). First though, House Democrats must also adopt the resolution, the vote for which is is expected to occur following the return of Representatives from their summer recess on August 23rd, almost a month earlier than originally planned.6 The Senate is also now in recess until mid-September, giving the House time to pass the resolution and for Senators to draft the initial text of the reconciliation bill by a September 15th deadline set by Senate Majority Leader Schumer. We expect that both bills will pass through the House and additional procedural steps, reaching President Biden’s desk in October.

The path to getting both bills to President Biden to sign them into law is clear, but Congressional Democrats must collaborate and compromise to ensure an optimal outcome. While details around the underlying policies that will be included in the reconciliation bill are unclear at this stage, the sum of new spending across the resolution and bipartisan bill pares in comparison to the combined $4.1T number from the American Jobs Plan and American Families Plan announced in March/April. Progressive Democrats in the House might be irked by this, but in our view, the spending outlined in the spring was higher than what is realistic in order to accommodate negotiations and compromise. We are encouraged by the significant funding appropriated for clean energy in the reconciliation bill and also expect hundreds of billions of dollars invested in affordable housing, education, and health care to go toward additional physical infrastructure in the form of buildings and clean technologies.

EVALUATING THE BENEFICIARIES OF THE BIPARTISAN INFRASTRUCTURE BILL

Products & Equipment: Companies that produce, distribute, or lease products and equipment that serve as components across the above infrastructure areas could realize additional revenues from large-scale federal funding:

Raw Materials & Composites: Companies that produce or supply raw materials and composites (or chemicals) that comprise infrastructure across the above infrastructure areas could derive new revenues from the spending carved out in the bill. 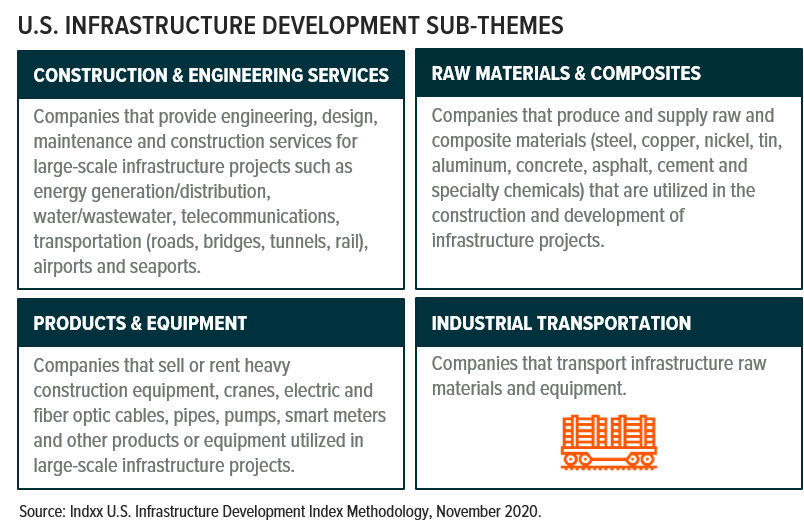 AQWA: The Global X Clean Water ETF seeks to invest in companies advancing the provision of clean water through industrial water treatment, storage and distribution infrastructure, as well as purification and efficiency strategies, among other activities.

SNSR: The Global X Internet of Things ETF seeks to invest in companies that stand to potentially benefit from the broader adoption of the Internet of Things (IoT), as enabled by technologies such as WiFi, 5G telecommunications infrastructure, and fiber optics. This includes the development and manufacturing of semiconductors and sensors, integrated products and solutions, and applications serving smart grids, smart homes, connected cars, and the industrial internet.

BUG: The Global X Cybersecurity ETF seeks to invest in companies that stand to potentially benefit from the increased adoption of cybersecurity technology, such as those whose principal business is in the development and management of security protocols preventing intrusion and attacks to systems, networks, applications, computers, and mobile devices.

4. New York Times, “Senators rush to pass infrastructure bill as new analysis shows it would add $256 billion to deficit over the next decade,” August 5th, 2021.

Investing involves risk, including the possible loss of principal. Investment in infrastructure-related companies are subject to various risks including governmental regulations, high interest costs associated with capital construction programs, costs associated with compliance and changes in environmental regulation, economic slowdown and excess capacity, competition from other providers of services and other factors.

Clean Water, CleanTech, Hydrogen and Information Technology companies typically face intense competition, short product lifecycles and potentially rapid product obsolescence. Clean Water Companies are subject to significant regulation regarding the usage, treatment, and distribution of water. Clean Water Companies may also be adversely affected by the impact of global climate change on the available supply of clean water reserves. CleanTech and Hydrogen companies may be significantly affected by fluctuations in energy prices and in the supply and demand of renewable energy, tax incentives, subsidies and other governmental regulations and policies.

The companies in which DRIV invests may be subject to rapid changes in technology, intense competition, rapid obsolescence of products and services, loss of intellectual property protections, evolving industry standards and frequent new product productions, and changes in business cycles and government regulation.

Cybersecurity Companies are subject to risks associated with additional regulatory oversight with regard to privacy/cybersecurity concerns. Declining or fluctuating subscription renewal rates for products/services or the loss or impairment of intellectual property rights could adversely affect profits.

Investments in smaller companies typically exhibit higher volatility. There are additional risks associated with investing in mining industries. The value of securities issued by companies in the energy sector may decline for many reasons, including, without limitation, changes in energy prices; international politics; energy conservation; the success of exploration projects; natural disasters or other catastrophes; changes in exchange rates, interest rates, or economic conditions; changes in demand for energy products and services; and tax and other government regulatory policies.