Copper is often seen as a leading barometer for global economic health. When the COVID-19 outbreak hit China and subsequently spread across the globe, copper spot prices fell from $2.86/pound in mid-January 2020 to $2.12/pound in mid-March, falling 26%.1 Quarantine measures forced copper mines around the world to shutter production for extended periods. A market imbalance developed shortly thereafter as certain economies began the re-opening process, but copper production lagged behind. Copper prices took off from there, hitting $3.52/pound at the end of 2020.2 By February 2021, copper had risen above $4.00/pound, nearly doubling March’s lows.

Optimism around copper stems from several factors. Asian economies, specifically China, are functioning at or close to pre-pandemic levels already. China’s recovery should translate into more demand for copper as it’s the world’s largest source of demand for the metal.  Reflation expectations in the US and other developed markets are increasing demand as well. Base metals like copper are often viewed as a hedge against price inflation and tend to do well as economic activity recovers. But beyond these near-term macro-economic trends, structural long-term changes such as accelerating electric vehicle adoption and the increasing potential for major infrastructure spending in the United States both bode well for copper.

(Our primer on the copper industry can be read here for more background information.)

Copper and the Reflation Trade

Breakeven inflation rates, which measure nominal bond yields against inflation protected bond yields of similar maturities, are showing that inflation expectations are rising. The severe recessionary dip from the COVID-19 pandemic, combined with massive fiscal and monetary policy measures, and a re-opening economy is a recipe to jolt inflation. 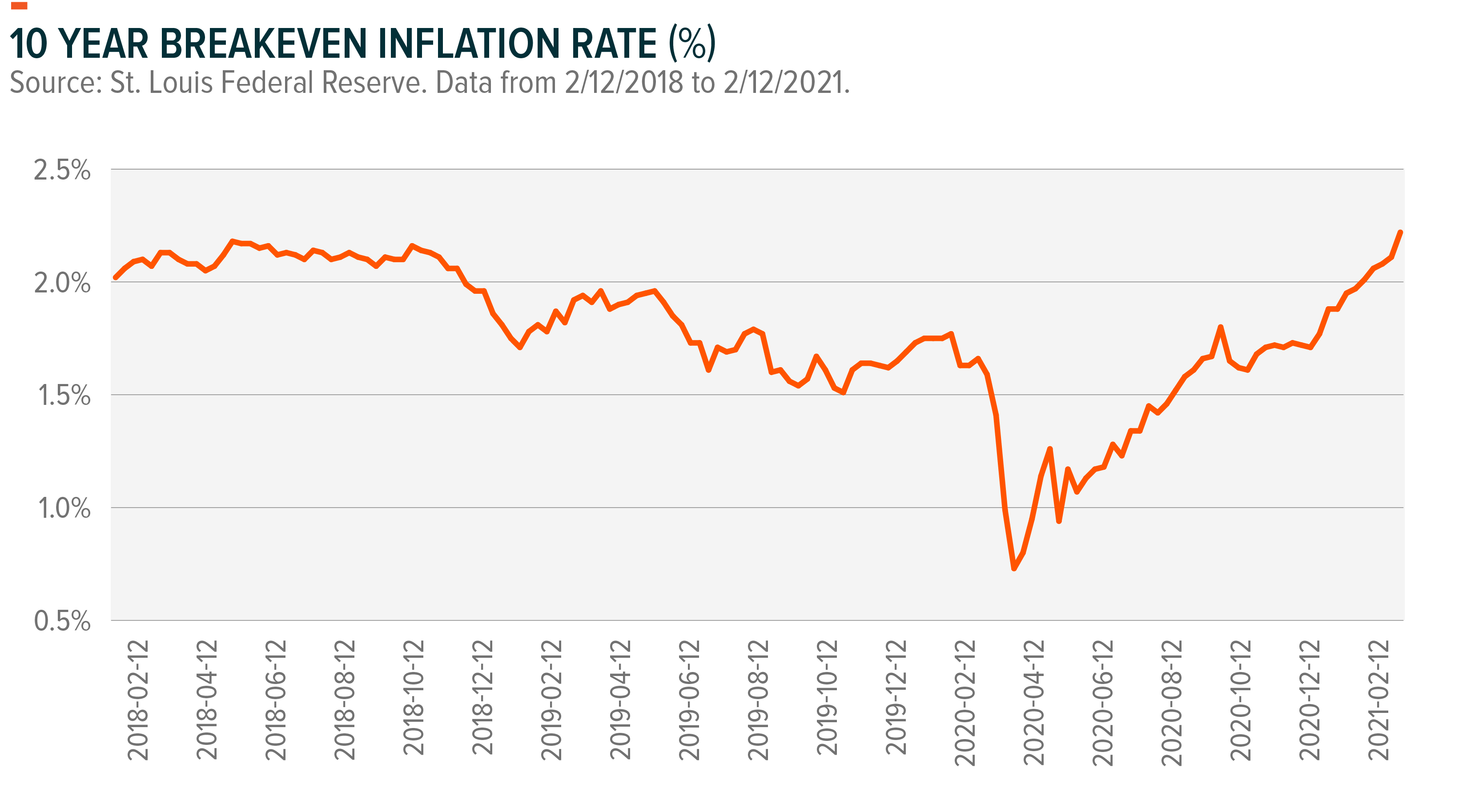 The 10 Year breakeven inflation rate has already slightly surpassed its pre-pandemic levels and may continue to rise. This trend is indicative of how expectations for inflation are increasing.

With historically low inflation since the global financial crisis, many investors have not felt compelled to position their portfolios for inflationary environments in quite a while. Inflation has not broached 3% since 2011, or 4% since the summer of 2008. But with inflation expectations rising quickly, this could change. There are several segments of the market that are often looked to for hedging inflation risks, such as cyclical equities and inflation protected bonds, but commodities like copper historically lead the way when investors believed rates were likely to take off. 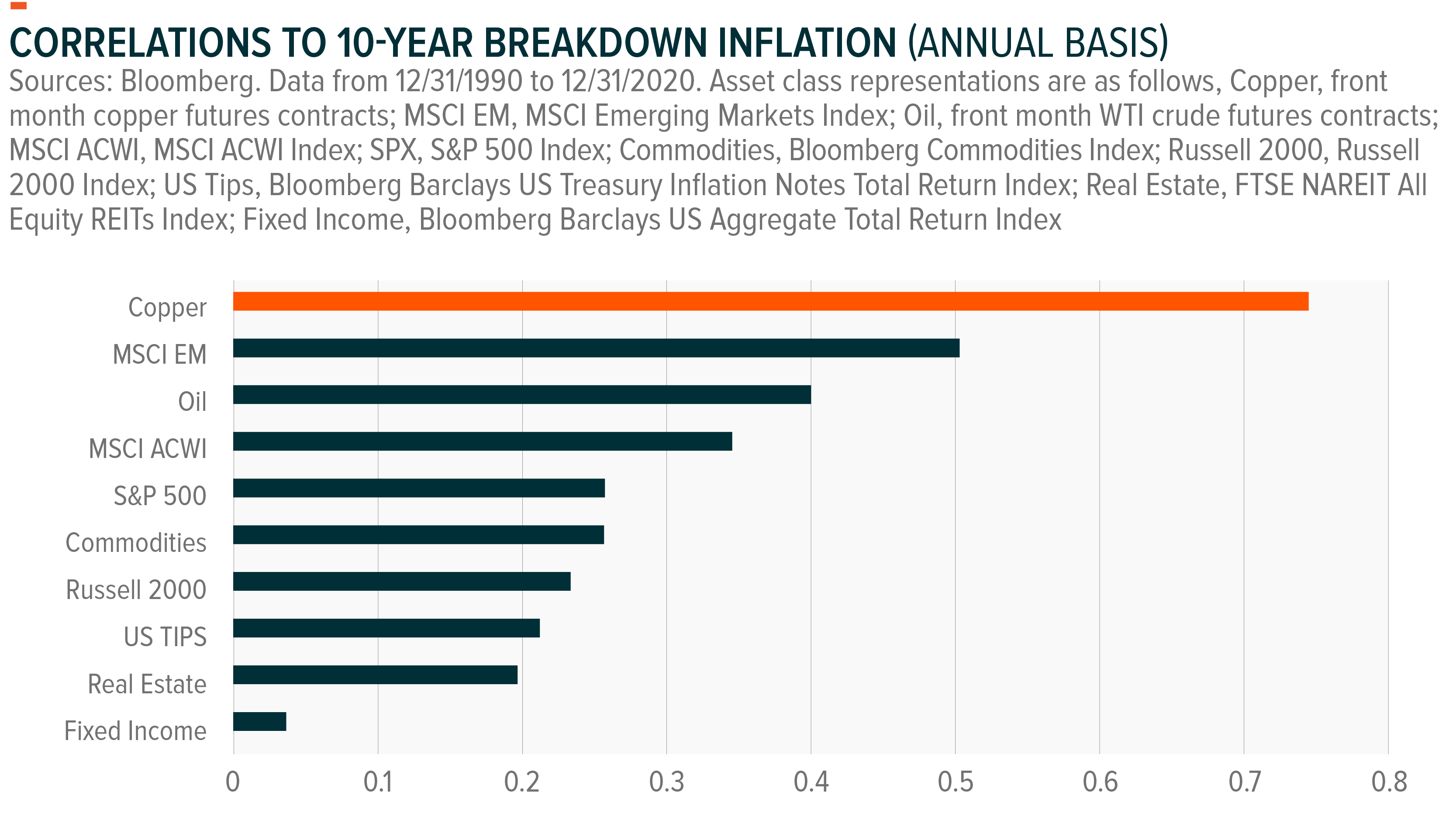 Base metals like copper traditionally act as a hedge against inflation largely because costs are easily passed through the supply chain to spot prices. Further analysis shows that the price of copper has historically risen 18% for every 1% annual rise in consumer prices since 1992.3

But inflation is not occurring in a vacuum; specifically, economists and market participants are anticipating a reflationary environment in 2021, where substantial government stimulus triggers both inflation and economic growth. Copper’s high correlation to economic growth is another reason why copper demand could rise in this environment. When economic conditions are strong, raw materials like copper tend to see prices rise as global demand for the commodity increases. In the United States, for example, 63% of copper was used in cyclically-associated industrial applications like building construction and transportation equipment. As we can see, when the economy is fully functioning, copper is an integral part of the economic engine.

The International Monetary Fund adjusted its expectations for global growth and US growth in 2021 upwards to 5.5% and 5.1% respectively, while the World Bank foresees 4% growth globally and 3.5% growth in the US. As investors position for an environment with potentially both strong growth and rising inflation, copper could thrive.

A final component of the reflation trade that could bode well for copper is a weakening US dollar. Inflation reduces the value of a currency, and therefore if US inflation accelerates, especially relative to other developed economies, the US dollar could weaken. From September 1st to February 24th, the Dollar Index has already weakened nearly 10%, falling from 99.93 to 90.18. Copper, like other commodities, is denominated in US dollars and tends to increase in US dollar terms as the USD depreciates. Further, a weakening dollar improves the purchasing power for emerging market nations like China, which can drive commodity demand higher with it. Therefore, if inflation continues to rise, economic growth recovers, and the dollar weakens, copper prices will enjoy several tailwinds related to reflation. 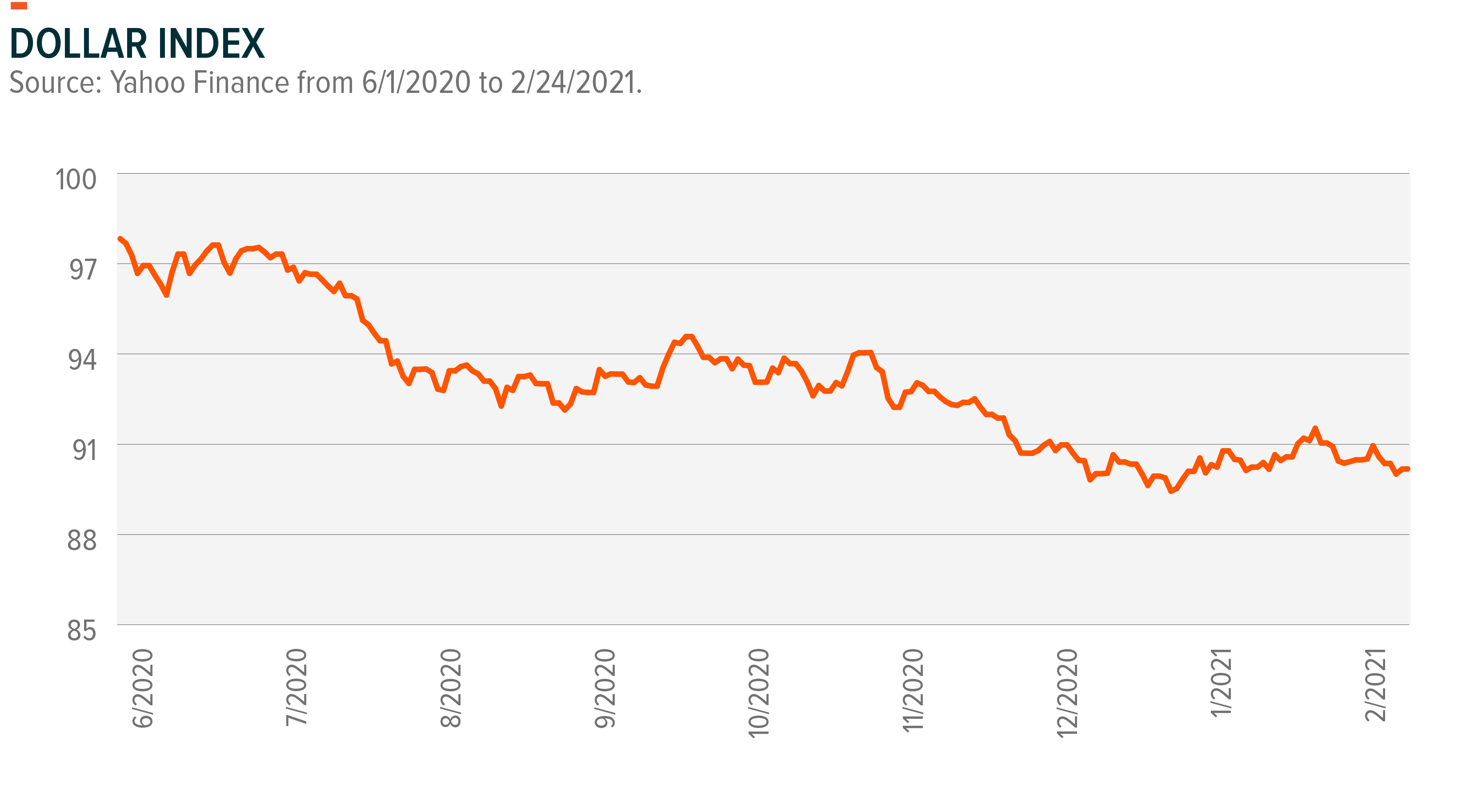 (Read more about our thoughts on inflation here)

As China Goes, So Goes Copper

China’s rapid growth and burgeoning infrastructure projects significantly influence copper demand. China alone makes up over 50% of global copper demand today. 4 In 1978, China began its economic reforms and opening-up policy which gradually shifted the country to an export-led and then more recently a consumer-driven economy. These reforms set the stage for China’s meteoric economic rise over the next four decades, with GDP (2010 US dollars) growing nearly 34-fold from $340.67 billion in 1980 to $11.53 trillion in 2019.5  A good portion of this growth was driven by massive infrastructure projects, which contributed to a dramatic rise in copper consumption, from 1.85 million tons in 2000 to 12.0 million tons in 2019.6 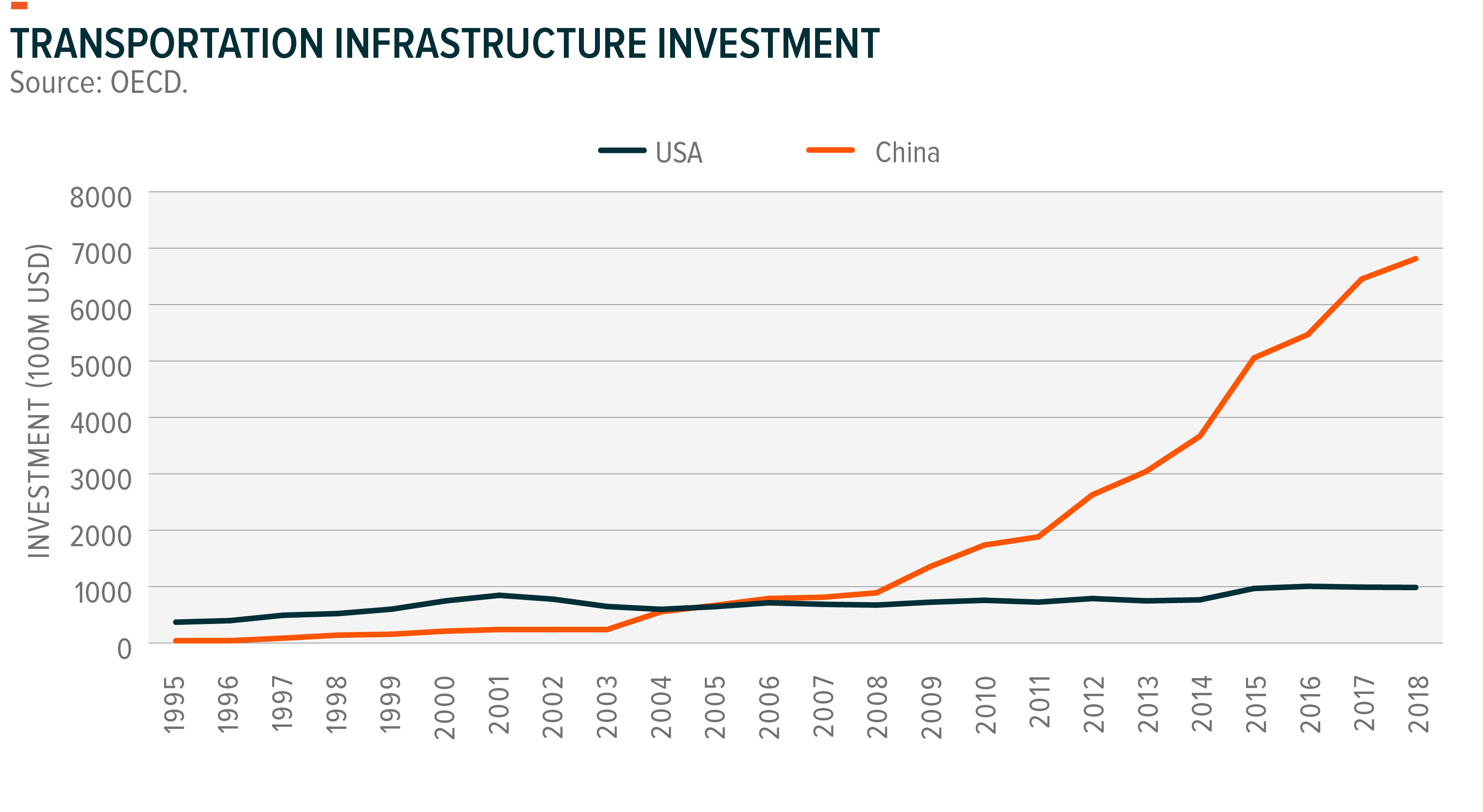 To understand China’s influence in the copper market, it’s important to look at their growth strategy across periods. When faced with economic headwinds during the 1997 Asian financial crisis and the 2008 global financial crisis, China turned to infrastructure spending as a primary means to stimulate the economy. This strategy was used again in 2020 when China issued $565 billion in special bonds for infrastructure development during the COVID-19 crisis. Beyond its borders, China has been building infrastructure in developing countries since 2013 as part of a diplomatic and economic strategy known as the Belt and Road Initiative (BRI).  Projects in the BRI were estimated to cost $1 trillion USD as of 2019.7 Copper offers the highest conductivity properties of any non-precious metal, and is highly resistant to corrosion.8 This makes copper the ideal metal in the industrial electrical wiring process needed for infrastructure projects.

In February 2020, China implemented a nationwide lockdown that brought factory output down to abnormally low levels. It is no surprise that this flowed through into copper prices. Peak to trough, from January 13th to March 23rd, copper prices declined by -26.2%.9 China’s recovery out of the pandemic became a crucial driver to copper demand, with PMI numbers jumping from 35.7 in February 2020 to 51.3 in January 2021 coinciding with a rise in copper prices. 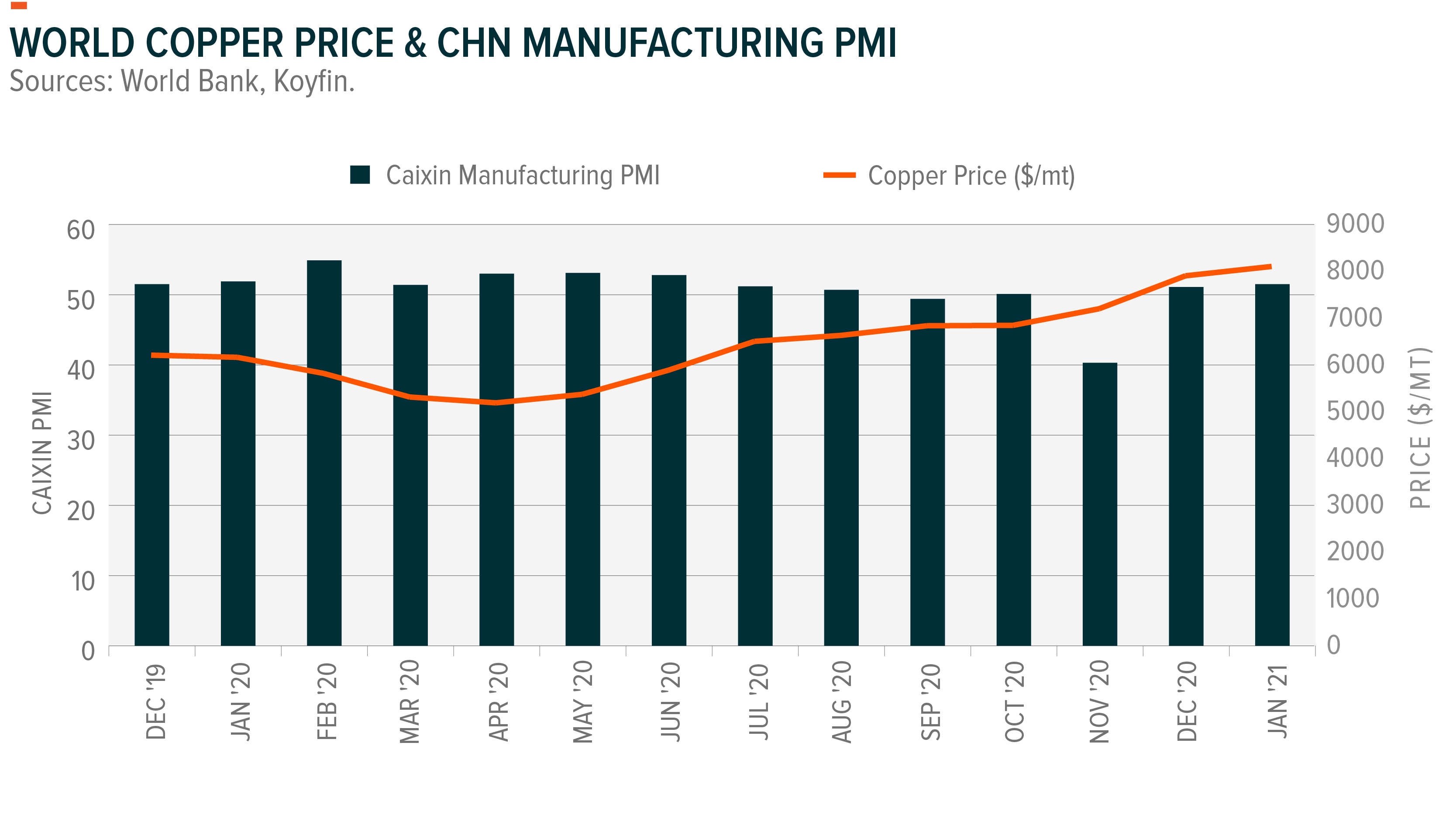 At the December 2018 Central Economic Work Conference, the Chinese government began to use the term “new infrastructure” to refer to its shift towards high-tech infrastructure projects based in 5G, AI, IoT, UHV (ultra-high voltage) and other emerging technologies. The government’s pledge to achieve net-zero emissions by 2060 also signaled an increasing commitment to cleantech and electric vehicles.

Copper looks well-positioned to benefit from China’s “new infrastructure” commitments as well. To give an idea of how much copper is needed for this transition

These estimates highlight that integrating new technologies into China’s infrastructure base will cause a substantial increase in copper demand.

US CleanTech Push Could Spur Demand as Well 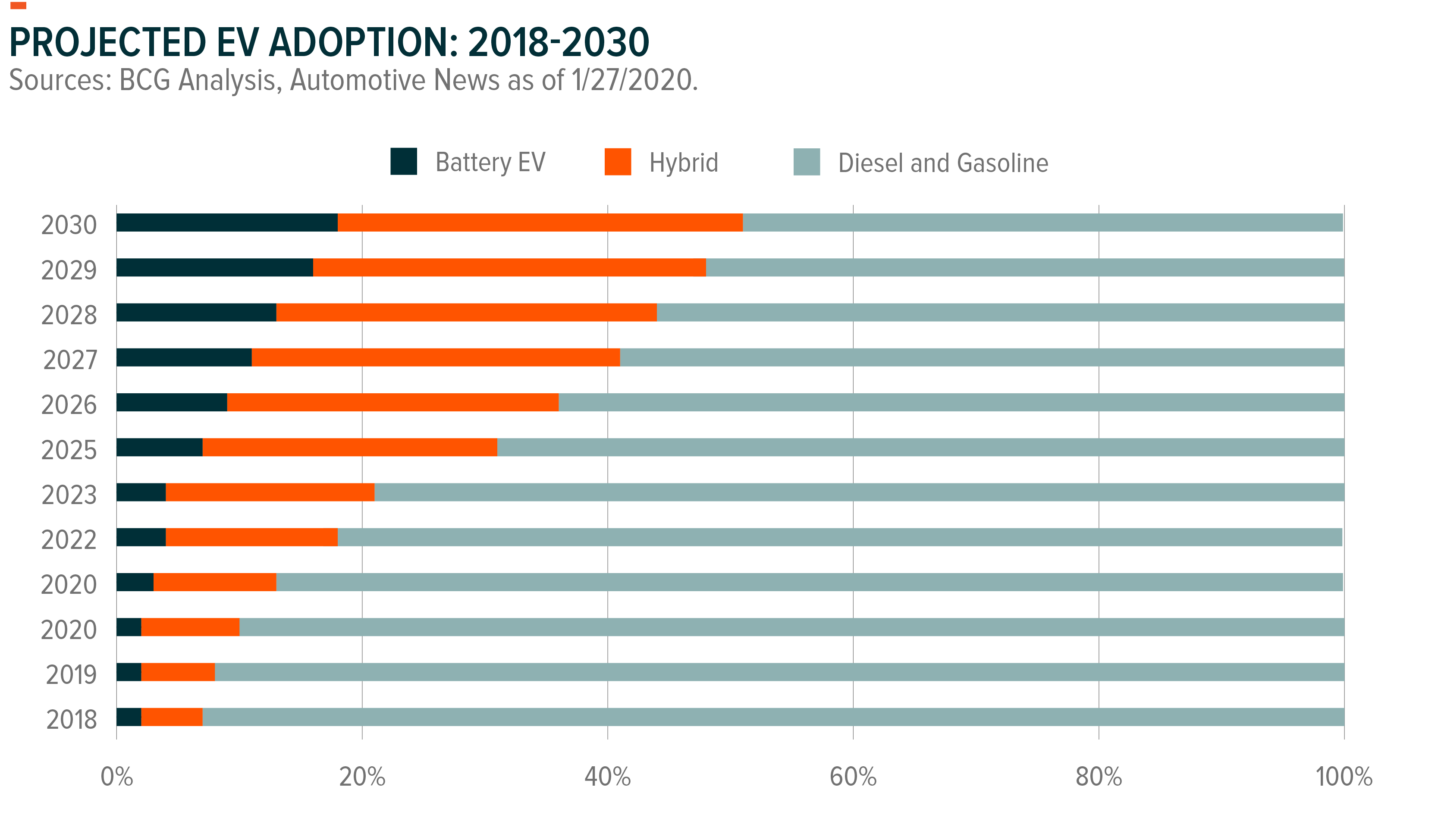 Beyond EVs and charging infrastructure, renewable energy sources like solar panels and wind turbines require approximately five times more copper than gas and coal-powered electricity generation.22 As the US recommits to the Paris Agreement and seeks to reach carbon neutrality by 2050, copper demand could rise substantially.

While China is the key to copper demand, Latin America is its counterpart on the supply side of the equation. Chile and Peru alone provide 40% of the global copper supply.23  Lockdowns and reduced mining output in Chile and Peru became a cause for concern in 2020 amid the pandemic. Constricted levels of supply may have buoyed global copper prices to some extent as the global economy shut down, with prices falling less than other commodities, like oil, amid the turbulent period. But there is a risk that copper mines in Chile and Peru could once again fall into reduced capacity or even shutdowns if the spread of COVID-19 worsens. 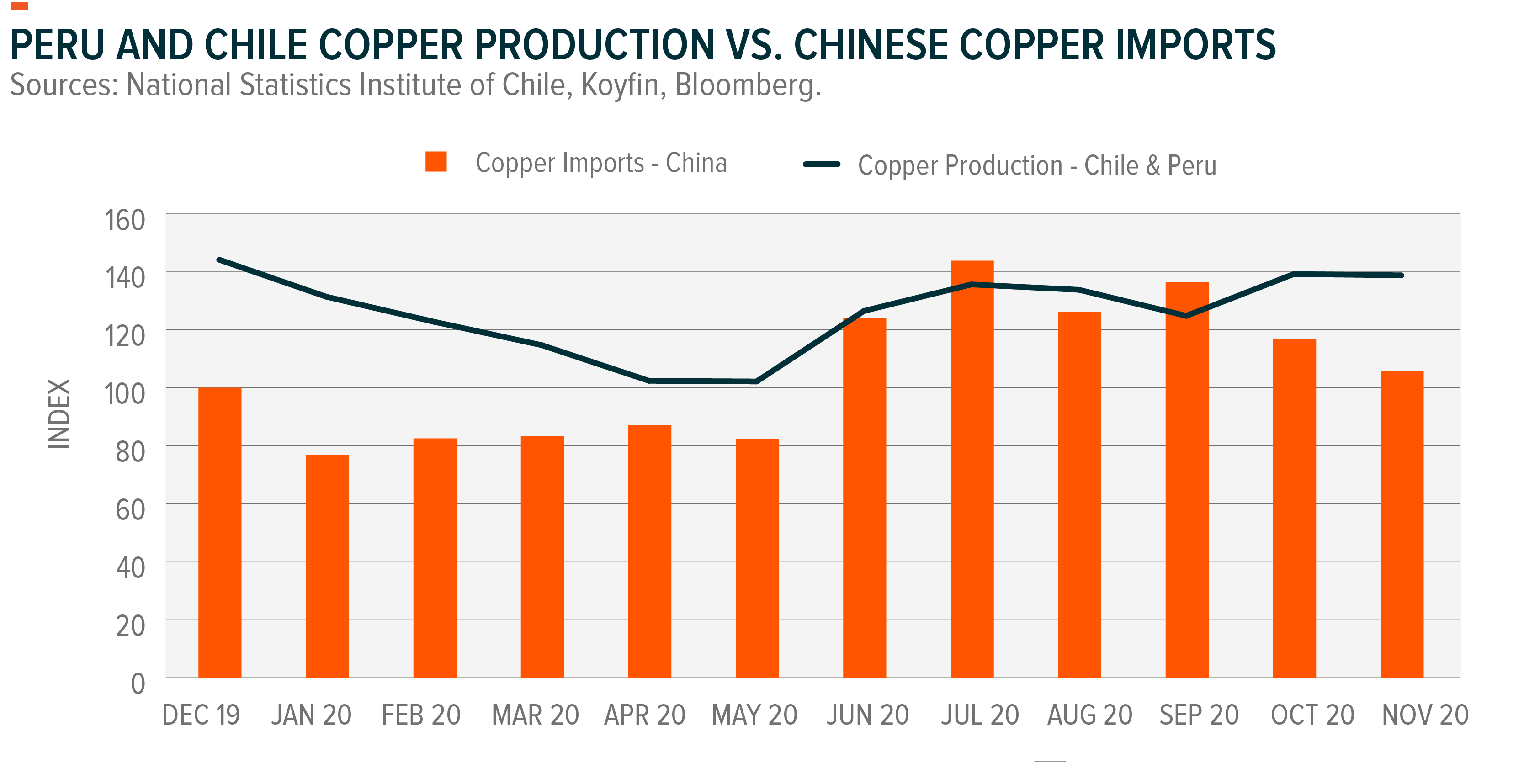 Both Chile and Peru implemented some form of lockdown at different points in time. Peru’s first lockdown began in mid-March 2020 and continued until April 2020. Faced with a second wave of COVID-19 cases in 2021, the Peruvian government announced a broad lockdown beginning on January 31th and continuing until February 14th. These lockdowns have had a palpable effect on copper production. According to the ISCG, copper production in Chile contracted 14.5% between January and October 2020.24  As shown in the visual above, the months of April and May were particularly detrimental to copper production. Meanwhile, copper production in Peru tumbled from 225,496 tons in December 2019 to a nadir of 125,224 tons in April 2020. In total, the Peruvian government estimates that copper production fell by 12.5% to 2.15 million tons in 2020.25

The first lockdown clearly disrupted Peruvian mining. When the government announced a new lockdown in January 2021, it went out of its way to state that mining operations will be granted an exception. The government’s willingness to grant exceptions to mines may mitigate the extent of further supply disruptions in 2021, balancing the copper market to some extent in the near-term.

Vaccinations are a mitigating factor worth paying attention to. Chile’s rollout of vaccinations began at the start of February 2021 and has been moving along at an impressive pace. The Chilean government has a goal of vaccinating 15 million people by mid-2021.26 Given that Chile has a population of 19 million people, if this goal is achieved, it would mean that close to 80% of the population would be vaccinated by mid-2021. Peru is lagging behind Chile in its vaccination efforts. As of February 22nd, Peru has only administered 166,090 doses, which amounts to 0.50 doses per 100 people.27 The main takeaway here is that there is risk in both countries, but based on progress with vaccinations, the risk is lower in Chile than in Peru. 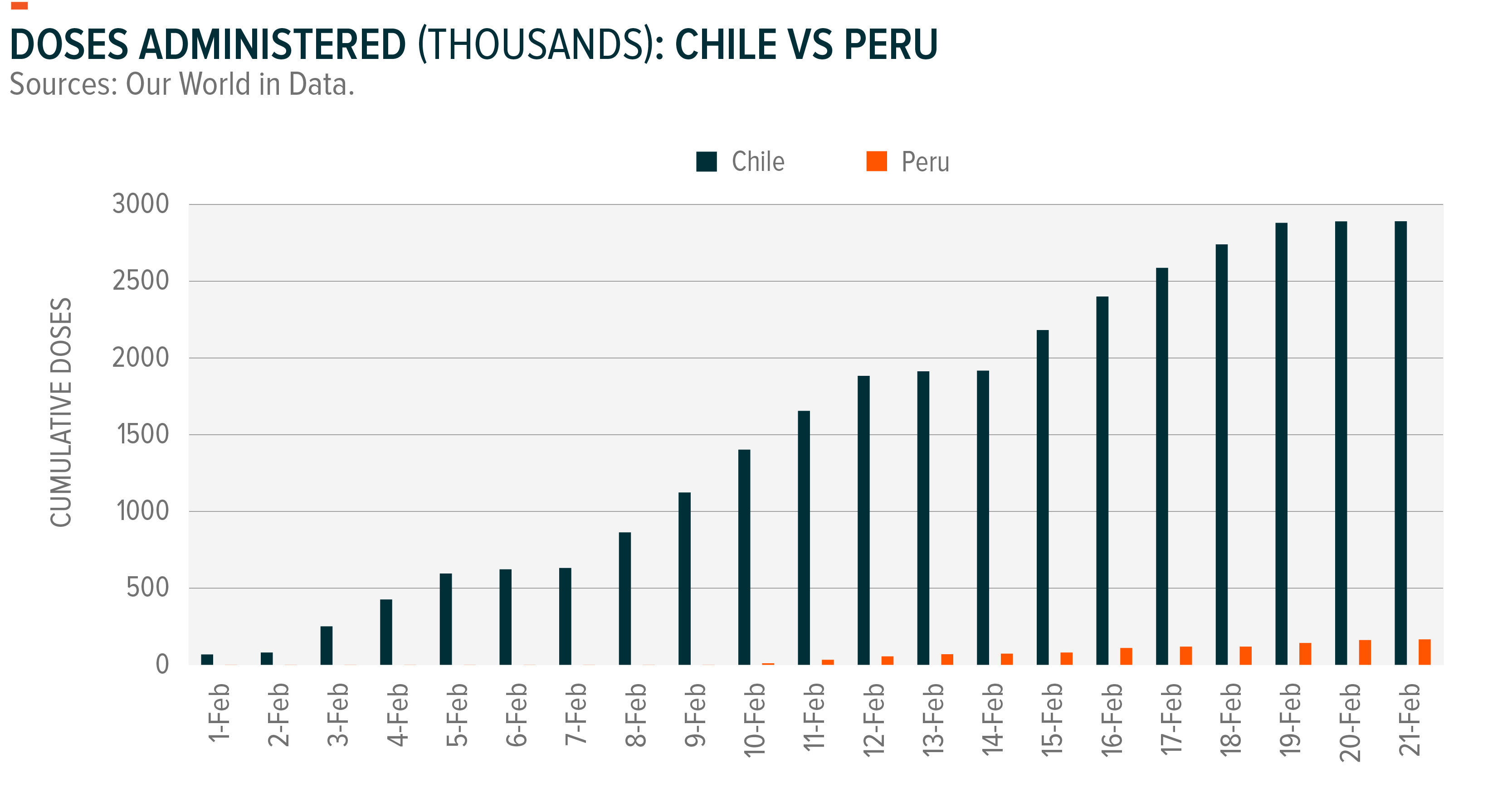 2021 may prove to be a transformation year for copper. Inflation expectations are rising, while global economic growth is recovering, with Chinese demand in particular coming back online at a rapid pace. These short-term fluctuations are important to consider, but they are not the whole story. Looking out into the long-term, demand for copper looks set to grow further. The rise of new industries like electric vehicles and renewable energy as well as continuing traditional infrastructure needs in China and the US mean that demand for copper will likely persist well after COVID-19 disruptions subside.

Investors who are optimistic about copper have a few options to choose from:

A liquid alternative might be an exchange-traded fund (ETF) like the Global X Copper Miners ETF (COPX) that invests in copper mining equities from around the world. 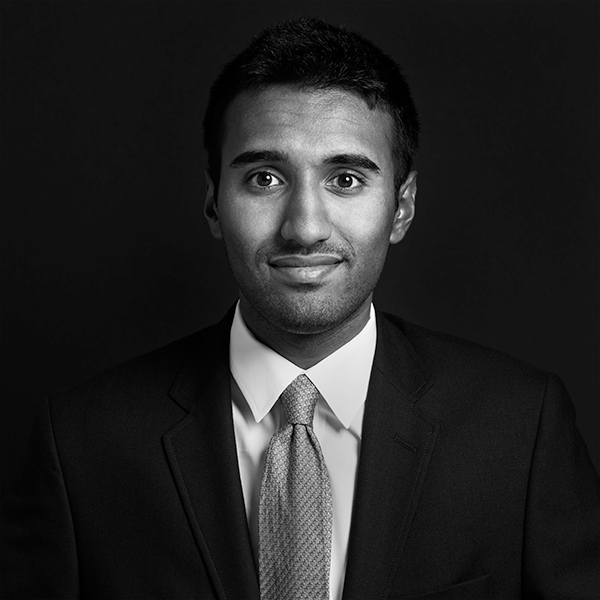 Copper: Measured based on the Generic 1st ‘HG’ Future, which is the nearest copper future to expiration.

Oil: Measured based on the Generic 1st ‘CL’ Future, which is the nearest copper future to expiration.

Investing involves risk, including the possible loss of principal. International investments may involve risk of capital loss from unfavorable fluctuation in currency values, from differences in generally accepted accounting principles, or from economic or political instability in other nations. Emerging markets involve heightened risks related to the same factors as well as increased volatility and lower trading volume. Narrowly focused investments may be subject to higher volatility. There are additional risks associated with investing in copper and the copper mining industry. COPX is non-diversified. Indices are unmanaged and do not include the effect of fees, expenses or sales charges. One cannot invest directly in an index. Index returns do not represent actual fund performance. Past performance is not a guarantee of future results.