What’s Next for Greece After Bailout Exit

More than eight years after its debt crisis began, Greece has now exited its third economic bailout program. A healthier primary balance surplus and expectations for further GDP growth are cause for optimism. But sustaining positive momentum in the wake of the largest economic bailout in history and a generation of significant political turmoil will take some doing. At the top of Greece’s to-do list: strengthening the financial system, attracting foreign capital, and maintaining fiscal discipline and political stability.

Greece’s real GDP increased 1.4% in 2017 and, according to estimates, could accelerate to roughly 2% in 2018 and 2019. Such progress earned praise from the international community, including the Organisation for Economic Co-operation and Development (OECD), which recently lauded the pace of reforms and fiscal consolidation.1 In addition, credit rating agencies Moody’s, S&P, Fitch, and DBRS have upgraded Greece’s sovereign credit rating. Much of this praise comes from improvements in the government’s deficit and trade balance. In 2009, Greece’s government ran a fiscal deficit amounting to a crippling 15% of GDP, but it managed to reestablish a slight surplus in 2016 and continued to build it up in 2017. In addition, Greece has trimmed its current account deficit from 15% of GDP in 2008 to about 1% of GDP.2

Of course, those numbers alone don’t tell the full story. While, unemployment is down to 19.5% from a high of 26%, it still remains a significant issue. For those fortunate to have work, their wages have fallen 20% as job creation has skewed heavily toward the part-time, lower-wage variety.3 As a result, poverty is rising and a growing concern. Also of significant concern is the drain of talented professionals who are leaving Greece for greener pastures in other European Union countries.4

For Greece to enter a period of sustainable growth, the first area to shore up is the financial system. With exposure as of June 2018 to approximately $88.6 billion of nonperforming loans (NPLs) Greek banks remain weak. This high amount of NPLs locks up lending because banks must keep capital on their balance sheets to protect against defaults. Less lending, in turn, negatively affects economic growth.

While major Greek banks have raised more than $18 billion in capital since 2015 and decreased their nonperforming exposures by more than $21 billion (or 17.3%), overall exposure still remains high.5, 6

Bank of Greece Governor Yannis Stournaras believes that innovative solutions may be needed to jumpstart lending, boost investor confidence, and speed up the recovery. One such solution may be electronic auctions. These online auctions are designed to sell off forestalled properties and push strategic defaulters to repay. Largely successful since starting in 2017, e-auctions have been praised by the OECD, which argues that they are key to meeting reduction targets. Other solutions could involve creating a bad bank to assume some of the burden from Greek banks’ liabilities or implementing partial loan sell-offs. Regardless of the method, cleaning up the balance sheets of Greek banks to allow for normal lending practices will be critical to revive the economy.

Attracting foreign capital is another key to jumpstarting Greece’s recovery, particularly amid the slow unwind of NPLs. Capital inflows to Greece are low relative to other EU nations, but foreign direct investment (FDI) jumped from $500 million to $4 billion in 2017, its highest level since 2009.7

Greece’s creditors understood the importance of foreign capital when they required the government to begin privatizing state-owned enterprises (SOEs) across various industries. Thus far, foreigners have engaged in auctions of state-owned infrastructure and real estate. Examples include the sale of the Piraeus Port Authority and the former Astir Palace, now a major tourist hotel complex in Athens.

But just auctioning off state-owned assets is insufficient. New facilities and businesses that help modernize the economy and generate jobs are needed to make Greece an attractive long-term investment destination. Tourism can help as well, and Greece did attract a record number of visitors in 2017. But tourism can also be fickle, particularly if civil unrest, political uncertainty, or labor strikes deter foreigners. 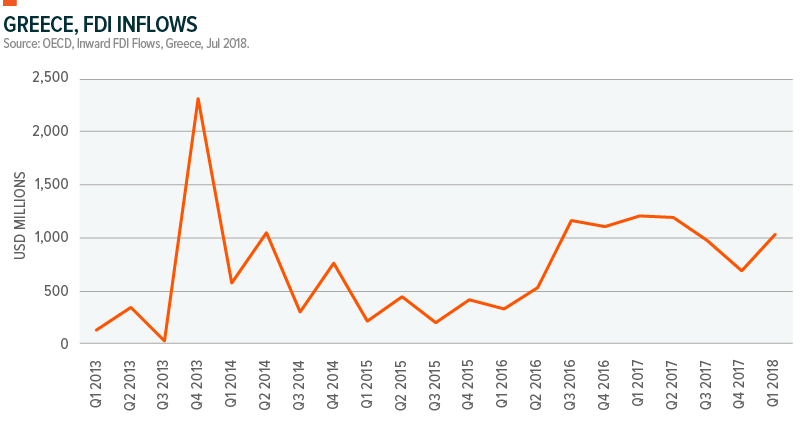 Prime Minister Alexis Tsipras’ mandate runs until September 2019, but a snap election could be called as early as May. Keeping public assistance reforms on the right track as elections heat up is critical, especially amid a rising wave of nationalism spurred by the migrant crisis.

The main competition for Tsipras and the Coalition of the Radical Left party is likely to come from the New Democracy Party’s Kyriakos Mitsotakis. Similar to Mitsotakis’ platform, which focuses on easing tax burdens, Tsipras will likely focus on ways to preserve the primary account surplus and boost domestic growth.

The challenge for whichever party prevails will be balancing fiscal reform with sufficient funding for social programs to appease voters who are eager to ease the heavy constraints of the last bailout program.

Greece’s eurozone creditors staunched the bleeding repeatedly. Now it’s on Greece to manage its rehab. Public debt equals about 180% of GDP,8 so Greece isn’t out of the woods yet, but its budget is in surplus and the economy is growing again.

Investors are beginning to see the improvements. They may also see a sweet spot with relatively cheap valuations and falling debt levels, despite the lack of upward pressures on wages and prices. However, for investors to believe it has finally turned the corner, Greece needs to show it has the wherewithal to support long-term economic growth.