The Future of Transportation is Autonomous & Electric

On April 17th, the Global X Autonomous & Electric Vehicles ETF (DRIV) was listed on Nasdaq and began trading. DRIV seeks to invest in companies involved in the development of autonomous vehicle technology, electric vehicles (EVs), and EV components and materials. This includes companies involved in the development of autonomous vehicle software and hardware, as well as companies that produce EVs, EV components such as lithium batteries, and critical EV materials such as lithium and cobalt. DRIV is the 6th ETF in Global X’s Thematic Tech suite of ETFs.

While still early in their development and adoption, autonomous and electric vehicles are rapidly advancing and appear poised to trigger the transportation industry’s largest shakeup in over a century. In this piece, we explore these two closely related themes, by answering the following questions:

What is the current state of electric vehicles? 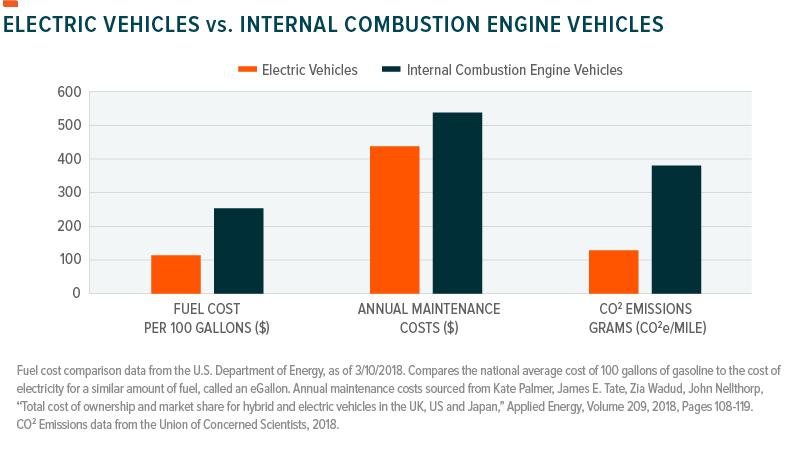 Presently, EVs remain more expensive than ICEs, but many analysts believe this will change within the next 10 years as battery costs continue to rapidly decline. In the three year period from 2014 to 2016, battery costs fell over 50% from process improvements and scale effects, bringing EVs significantly closer to parity with ICE costs. 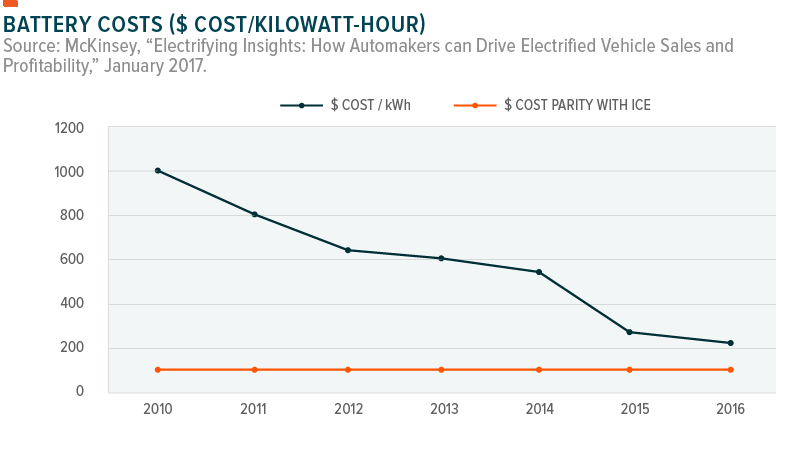 If EVs become cheaper to buy and operate than ICEVs, consumers should naturally be drawn towards electric models. Government incentives and regulations are already helping to close this gap. Currently, the US federal tax credit for an EV ranges from $2,500 to $7,500 per vehicle.1 In some states, there are additional incentives like lower vehicle registration fees, preferred parking spots, and access to high-occupancy vehicle (HOV) lanes.

Outside of the economic decision to buy an EV, consumers need to overcome ‘range anxiety,’ or fears that a battery cannot take them as far as a gas tank. As battery performance continues to improve and charging networks expand, this fear is likely to eventually abate over time. Over the last six years, the median range for EVs has extended 56%, and certain models can now drive well over 300 miles on a single charge. 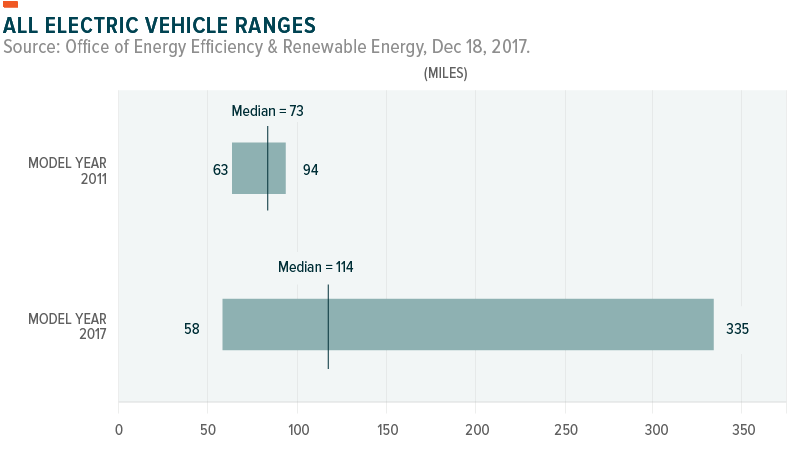 Currently, EVs represent only a small sliver of the total car market, showing that it is a technology still very early in its adoption curve. Yet despite relatively small numbers, sales have been accelerating. In 2017, electric vehicle sales including plug-in hybrids (PHEVs), accounted for 1.7% of total car sales around the globe. This represented a significant increase from 2016, where sales amounted to just 1.1% of the total car market. In EV-friendly Norway, sales of electric cars amounted to a much higher number – 39% of total sales in 2017.2 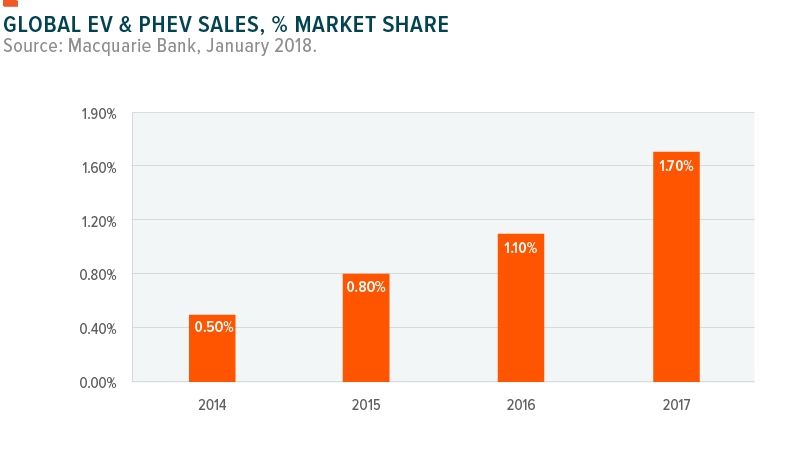 What is the current state of autonomous vehicles?

Autonomous vehicles (AVs) include a variety of vehicles including passenger cars, trucks, and drones, which rely on artificial intelligence to operate with varying degrees of human input. By computing billions of data points each second from an array of sensors, cameras, and radar systems, AVs can effectively ‘see’ the road and respond to changing conditions or navigate obstacles.

An AV’s ability to operate without human input depends on its level of sophistication, as described below.3

Level 1 (Driver Assistance): The driver controls most driving functions, but under certain conditions, the vehicle may be able to adjust cruise control speed or stay in a lane.

Level 2 (Partial Automation): The car can both accelerate/decelerate and perform basic steering functions. Driver is still responsible for directing navigation like exiting a highway, changing lanes, or turning on a new street.

Level 3 (Conditional Automation): The car can monitor the driving environment and accelerate, turn, or brake, but still expects human intervention when alerted.

Level 4 (High Automation): The car can control all driving aspects and operate without intervention from a human, but only under certain conditions.

Level 5 (Full Automation): The car is fully autonomous and requires no human input to operate in all driving conditions.

The holy grail for autonomous vehicle technology is to universally achieve level 5 automation, meaning there will be no need for human drivers. High end cars are already capable of level 2 autonomy, such as Tesla’s ‘Autopilot’ feature. At the most advanced end, companies like Alphabet’s Waymo unit are testing level 4 driving in specially equipped vehicles.4 These cars have no drivers behind the wheel, but are limited to operating in designated areas with ideal road conditions.

While the race to level 5 technology is already well underway, a number of roadblocks will need to be navigated before reaching the finish line. For one, autonomous vehicles must learn to drive not just in predictable environments, but also in imperfect and dynamic conditions, where human behavior, weather, and obstacles can create challenging situations. In addition, laws and regulations governing where AVs can operate and how insurance is handled could limit AV access to public roads. Yet despite these challenges, many analysts and industry experts believe level 5 autonomy could be close: Tesla’s Elon Musk optimistically believes it could arrive by 2019, whereas BMW and Ford are aiming for 2021.

What does a world of autonomous and electric vehicles look like?

A wholesale shift to autonomous and electric vehicles would not just reshape the entire transportation industry, but also our daily lives. GM’s CEO Mary Barra refers to this future as “zero crashes, zero emissions, and zero fatalities.”5 Presumably, EV/AVs will become smart enough to avoid all collisions, eliminating over 1.25 million traffic fatalities around the world each year.6 Their battery powered-nature would significantly reduce air pollution, particularly in cities where car density and air pollution are at their highest. And traffic congestion would become a thing of the past, as networked cars would communicate with each other and local infrastructure to seamlessly choreograph traffic movements. Some estimates show this could save the average commuter 42 hours per year.7 The value of such developments is virtually unquantifiable, as people would likely be able to live longer, healthier lives, with more free time.

The very nature of vehicle ownership could change as well. An AV can hypothetically run all day, pausing only to recharge its batteries. Therefore a more efficient allocation of resources may be to not own an AV and keep it parked, but to pay for an AV’s services only when it’s needed. Such a model could make ride-sharing the status quo. Savings on fuel and maintenance from its electric engine, coupled with its autonomous nature that allows for higher usage rates and eliminates driver wages, could drive down transportation costs considerably. Some analysts expect the cost per mile could fall nearly 60%, from currently around $1.20 to $0.50.8 Despite these potential benefits, the transition to an autonomous world could cause significant job displacements in the trucking, taxi, and delivery industries, which are estimated to employ 3.8 million people in the US.9 Other jobs where driving is an important component could be affected as well, further expanding the need for policymakers, corporations, and non-profits to implement effective educational programs to retrain workers for a driverless world.

Which companies could stand to benefit from the materialization of this theme?

As discussed throughout this piece, the implications of a movement to EV & AVs can have a far reaching impact across the global economy. However, we believe there are a few key segments that are best positioned to benefit from the materialization of this trend, including:

4. A complete list of DRIV’s holdings can be found here. Holdings are subject to change.

Investing involves risk, including the possible loss of principal. The investable universe of companies in which DRIV may invest may be limited. The companies in which the Fund invests may be subject to rapid changes in technology, intense competition, rapid obsolescence of products and services, loss of intellectual property protections, evolving industry standards and frequent new product productions, and changes in business cycles and government regulation. There are additional risks associated with investing in mining industries. International investments may involve risk of capital loss from unfavorable fluctuation in currency values, from differences in generally accepted accounting principles or from social, economic or political instability in other nations. Emerging markets involve heightened risks related to the same factors as well as increased volatility and lower trading volume. DRIV is non-diversified.

Carefully consider the Fund’s investment objectives, risks, and charges and expenses. This and other information can be found in the Fund’s summary or full prospectuses which may be obtained at www.globalxetfs.com. Please read the prospectus carefully before investing.