Our recent blog post on the differences between structural and cyclical themes discussed how those that are structural in nature tend to be one-off shifts that change existing paradigms, while cycle trends ebb and flow over time. In this post, we dig into how these disruptive one-off shifts tend to emerge and expand upon the characteristics of structural themes.

A Theory about Disruptive Technology 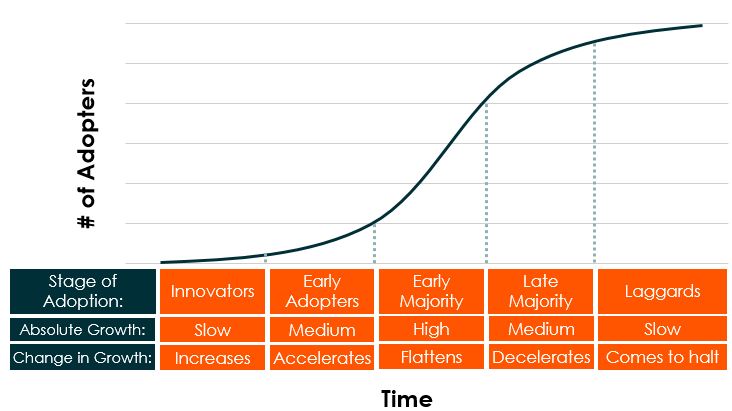 This Theory in Practice

In practice, the ‘S’ curve prediction has held up fairly accurately. Not all products or new technologies follow the same ‘S’ shape, but by and large, historical adoption patterns for disruptive technologies and products have followed a general ‘S’ shape, as demonstrated in the chart below.

The shape of this ‘S’ can be influenced by a variety of factors, including the speed of technological advancements, cost curves, regulations, competition, or even social norms. Some may never experience an ‘S’ at all, as technologies often fail to make it past the Innovators or Early Adopters stages, even if it is a superior product (apologies to Betamax fans).

What Does this Mean for Investors?

The relationship between an adoption curve and stock prices is not always a direct one. Many factors can come into play that introduce differences, such as companies taking losses to build market share, intense competition, or unproven business models. In social media, for instance, firms tend to prioritize building their user base before inundating users with ads. Therefore, the adoption curve tends to noticeably precede revenue growth. Earnings can lag even further behind, as many high growth companies look to plow their cash flows back into their businesses.

Yet while there may not be a direct relationship, investors can certainly take certain cues from the adoption curve. For example, knowing where a product or technology is in its adoption can help signal general risks and characteristics of an investment. For example, if a technology is still clearly in its Innovators stage, an investment may likely resemble more of a venture capital-like risk and return profile, given high potential returns, but also a high possibility of failure. At the other end of the spectrum, a technology that is nearly ubiquitous in the Late Majority or Laggards phase is very well established, but has less upside.

For growth-seeking investors, we believe finding tech that is somewhere between the Early Adopters and Early Majority stages could prove to be a “sweet spot.” In this range, growth potential is still high and accelerating, but the technology has undergone some level of vetting and has proven itself to a meaningful portion of the population.

FINX: The Global X FinTech ETF seeks to invest in companies on the leading edge of the emerging financial technology sector, which encompasses a range of innovations helping to transform established industries like insurance, investing, fundraising, and third-party lending through unique mobile and digital solutions.

SNSR: The Global X Internet of Things ETF seeks to invest in companies that stand to potentially benefit from the broader adoption of the Internet of Things (IoT). This includes the development and manufacturing of semiconductors and sensors, integrated products and solutions, and applications serving smart grids, smart homes, connected cars, and the industrial internet.

FINX, SNSR, and BOTZ invest in securities of companies engaged in Information Technology which can be affected by rapid product obsolescence, and intense industry competition.

The investable universe of companies in which FINX, SNSR, and BOTZ, may invest may be limited. LIT, FINX, SNSR, BOTZ, and SOCL are non-diversified.