On October 29th, 2019, we listed the Global X Video Game & Esports ETF (HERO) on Nasdaq. HERO seeks to invest in companies that develop or publish video games, facilitate the streaming and distribution of video gaming or esports content, own and operate within competitive esports leagues, or produce hardware used in video games and esports, including augmented and virtual reality.

While often stereotyped as a niche market for adolescents, the video game industry has leveled-up to become a global entertainment powerhouse. Analysts estimate global revenues in 2018 were nearly $140 billion,1 far more than the global box office revenue for movies & film ($42 billion) and global professional sports revenue ($52 billion – based on latest available estimates from 2016).2,3 Fueling this growth has been video games’ transition from a largely play-alone/play-at-home activity, to a group-play/play-anywhere culture. With the explosion of mobile and online gaming, players can game anywhere, with anyone. And with the introduction of streaming and esports, it has evolved into a spectator sport as well – one that is expected to exceed the viewership of every professional sport but the National Football League (NFL) by 2021.4

In this piece, we analyze the global video game ecosystem and its growth prospects as a disruptive theme in digital content. 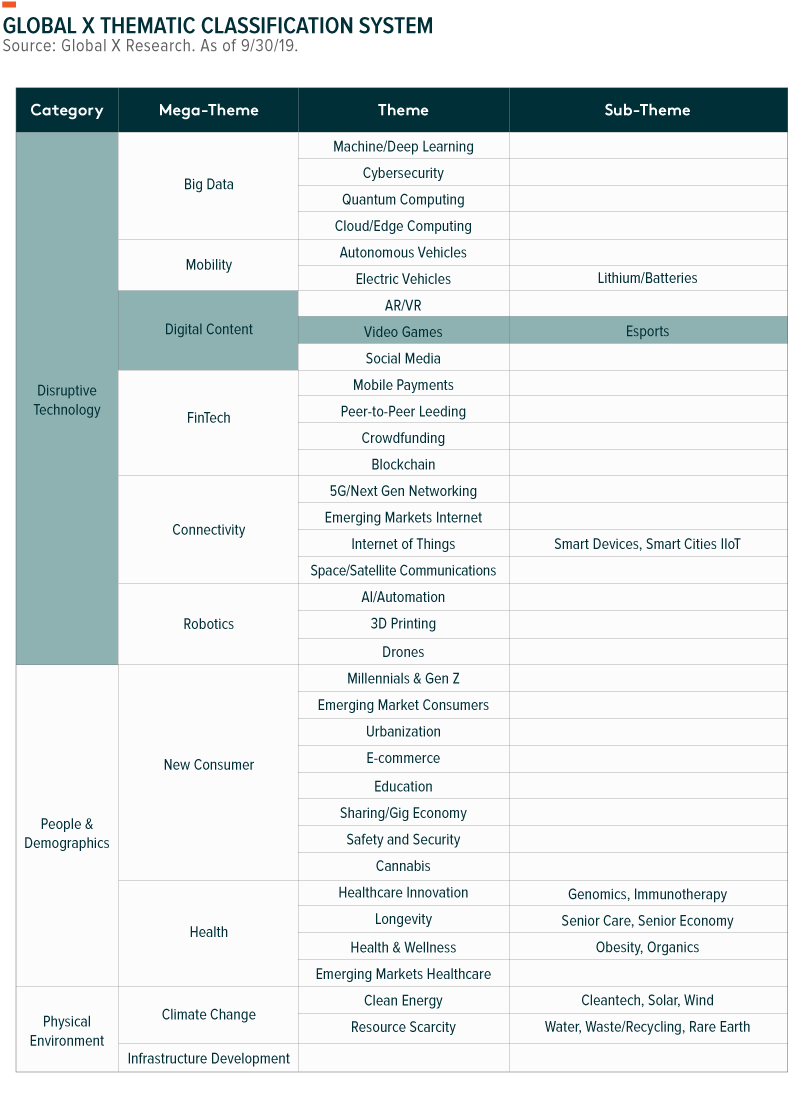 An Army of Gamers

In the mid-1990s, gamers numbered around 100 million, almost exclusively playing on home consoles like Nintendo 64 or PlayStation.5 Since then, technology has widened the accessibility of gaming to include other devices, including PCs and mobile devices like smartphones and tablets. Across these platforms, gamers now total more than 2 billion strong.6

Not only is the community of gamers growing, but the amount of time playing and watching video games is increasing as well. The average gamer spends seven hours and seven minutes per week gaming.7 Millennials aged 26 to 35, spend even more gaming, at eight hours and 12 minutes each week.8 More than 79% of gamers between the age of 18-25 watch other players stream games online every week.9 26 to 35 year olds spend roughly the same time watching others play video games as they do watching traditional sports on TV.10 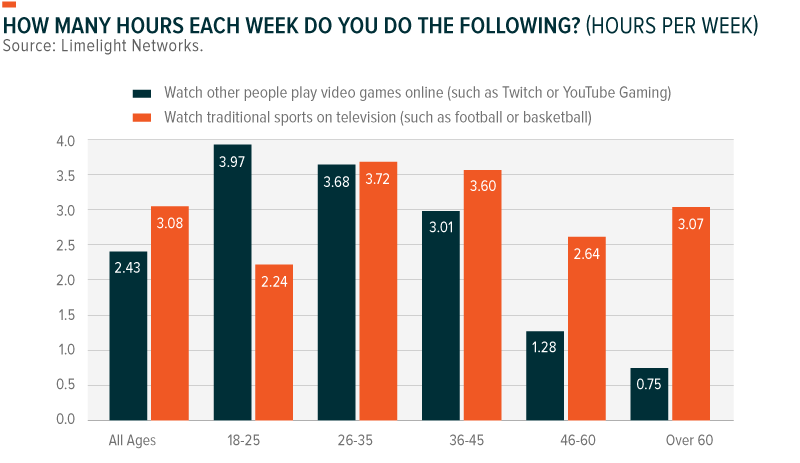 The Business of Gaming

The video game and esports ecosystem consists of four main areas. Video game developers & publishers are primarily responsible for creating and marketing games. Hardware manufacturers create the systems and peripherals that enable users to play and stream games. Esports and streaming providers allow gamers to watch professional gamers in action. And, finally, operators and owners of leagues and teams act as any other sports team by managing live tournaments. While each part of the ecosystem should benefit from their overall growth in video games and esports, their business models can differ substantially. 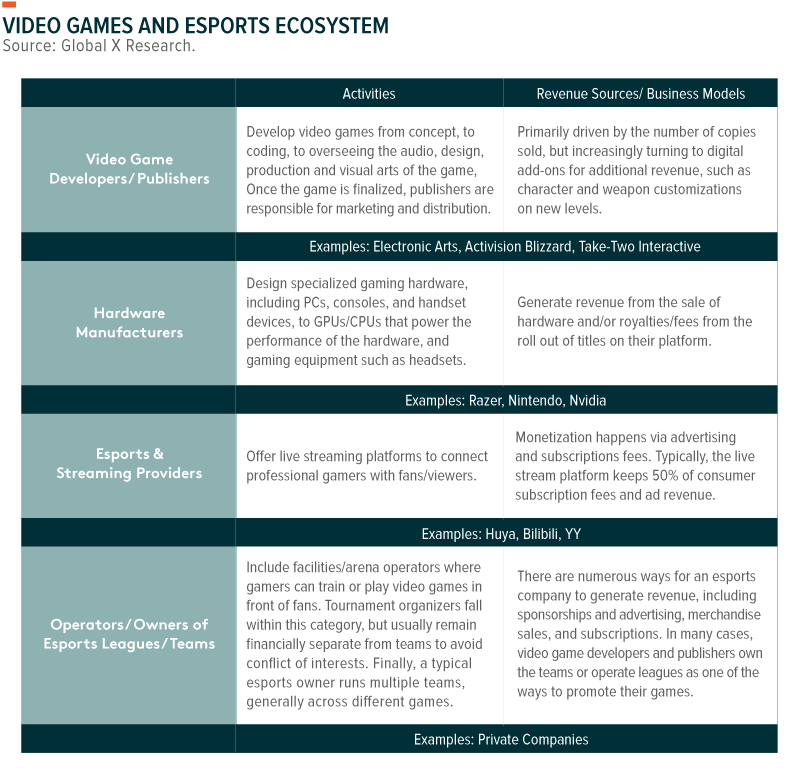 Given the widespread proliferation of smartphones, roughly 90% of today’s gamers are mobile.11 Yet from a revenue perspective, the money is still predominately in the PC and console formats, commanding an estimated 55% share of total revenue.12 Mobile gaming, on tablet and handheld devices, accounts for 9%, and smartphones 36% of total revenues.13 This dynamic could change in the near future as the mobile segment continues to grow through greater smartphone penetration and monetization efforts. What’s more, advancements in cloud computing and 5G technologies could further accelerate mobile gaming as they allow for more sophisticated titles to be played on handheld devices.

Traditionally, the video game industry offered little opportunity for recurring revenue, creating challenges for game developers and publishers who crave predictability. Similar to movie releases, developers spend millions upfront to develop a new title – the most expensive ever, GTA V, reached $265 million – before any revenue is made.14 Once a title is released, the number of purchases historically has determined whether it was a profitable hit or painful dud. As global video game revenues are expected to exceed $150 billion in 2019, however, this is model is changing rapidly.15

The largest contributor to the shift in business models is the transition from games that are physically bought in disk or cartridge form to digital delivery. Similar to downloading a movie on Apple TV, video games are now predominately downloaded to a console or mobile device.  In 2018, 83% of all video games were sold in digital form, a staggering increase from only just 20% 10 years ago.16 While digitalization helps to reduce costs, it also allows for more sources of revenue, such as the introduction of monthly subscriptions, ad revenue, and in-game purchases. While sometimes to the chagrin of players, game developers often sell add-ons to games such as additional levels, new characters and skins, and enhanced weapons or player capabilities. These add-ons cost virtually nothing to produce but can generate a steady stream of additional revenue for hit titles. For example, Fortnite is a free-to-play game, but still grossed $2.4 billion in revenues in 2018, by selling digital outfits for characters, weapons, and even dance moves.17

Advancements in cloud computing and 5G are expected to facilitate an even more dramatic shift in the gaming business model with the introduction of high-speed gaming-as-a-service. Just as Netflix allows fans to watch shows on demand without buying each episode, services like PlayStation Now, Xbox Game Pass, Google Stadia, and Apple Arcade offer on-demand subscription-based access to games. With 5G’s lower latency and greater bandwidth, graphic intensive games could soon be streamed via these platforms to either a home theater system or a smart phone, allowing the same game to be played virtually anywhere. With 85% of global gamers describing the process of downloading video games as frustrating and a top concern, 5G could alleviate some of those downloading-anxieties.18

Two other phenomena are adding new revenue streams in the video game ecosystem. The first is live streaming, where viewers pay subscription fees to watch their favorite pros play and narrate games. The other is esports, which has professionalized the video game industry by creating teams of gamers, who compete in tournaments that are broadcast around the world.

Live streaming creates a more personal viewing experience for gamers. Fans watching their favorite TV shows or sports teams can’t interact with the stars on their screens, but in gaming, they can. Viewers can subscribe to their favorite gamers, allowing them to watch their daily streams and to chat with other fans. A monthly subscription to a streaming platform could can cost $5 or more. Fans also donate an average of $29/month to their favorite gamers to support their streaming or to get a specific question answered.19 Typically, the live stream platform keeps 50% of consumer subscription fees and ad revenue; the other 50% goes to the gamers, who also get paid by sponsors and by donations from their most ardent fans.

Esports is another avenue for video game growth, as two million people streamed the finals of the Fortnite World Cup.20 That 2 million is well behind the over 100 million people that watched Super Bowl LIII. But 2 million streamers in just two years of existence, is a significant number to watch others play a video game. Globally, the esports audience is expected to reach 443 million viewers in 2019, up 12% from 395 million in 2018.21

There are numerous ways for an esports company to generate revenue, but most of the options are similar to any regular sports team. These include, sponsorships and advertising, merchandise sales, and subscriptions. In many cases, video game developers and publishers own the teams or operate leagues as one of the ways to promote their games.

Where gaming has gained acceptance

The rise of video games and esports has been so profound that some US colleges and universities now offer financial aid and scholarships for gamers. According to the National Association of Collegiate Esports (NACE), more than 130-member schools have varsity esports programs in the US.22

Scholarships are attractive to gamers, but so is prize money, which totaled $3 million for first place in the Fortnite World Cup. The winner, a 16-year-old from Philadelphia, wasn’t alone.23 Every qualified competitor received a minimum of $50,000 for competing in the event.24 With large viewership and ad revenue opportunities, video gaming has become a viable career path.

Esports’ expansion has even gained the attention of TV networks like ESPN, which started streaming live video game competitions to expand their audience. ESPN, in collaboration with Electronic Arts, announced this year the creation of EXP, a new gaming series that will feature esports events professionals, collegiate, and pro-am formats across an array of genres and games.25

Netflix CEO Reed Hastings put the rise of the gaming industry like this in a recent shareholder letter: “We compete with (and lose to) Fortnite more than HBO.” 26 It’s more evidence that people spend more time than ever playing and watching others play video games. A big reason why is that gaming is a new social outlet, where people can play together and interact with others from all over the world.27 And it’s not just for the kids anymore; people between the ages of 21 and 30 spend more time playing video games now than young generations did last decade.28 It’s that real-time interaction between gamers and viewers that seems poised to differentiate the gaming industry over time.

HERO: The Global X Video Game & Esports ETF seeks to invest in companies that develop or publish video games, facilitate the streaming and distribution of video gaming or esports content, own and operate within competitive esports leagues, or produce hardware used in video games and esports, including augmented and virtual reality.

5. World Economic Forum, “3 surprising facts about the gaming industry and why you should start paying attention,” Jun 13, 2017.

22. The National Association of Collegiate Esports (NACE), About, 2019.

Investing involves risk, including the possible loss of principal. The investable universe of companies in which HERO may invest may be limited. Video Game and Esports Companies are subject to risks associated with additional regulatory oversight with regard to privacy/cybersecurity concerns, shifting consumer preferences, and potential licensing challenges. The Fund invests in securities of companies engaged in Information Technology, which can be affected by rapid product obsolescence and intense industry competition. International investments may involve risk of capital loss from unfavorable fluctuation in currency values, from differences in generally accepted accounting principles or from social, economic or political instability in other nations. HERO is non-diversified.