The Difference between Cyclical and Structural Themes

Investors are increasingly taking a thematic approach to investing by considering powerful macro-level trends and their potential impact on the returns of various investments. We believe it’s important, however, to distinguish between two fundamentally different types of themes given their different characteristics. 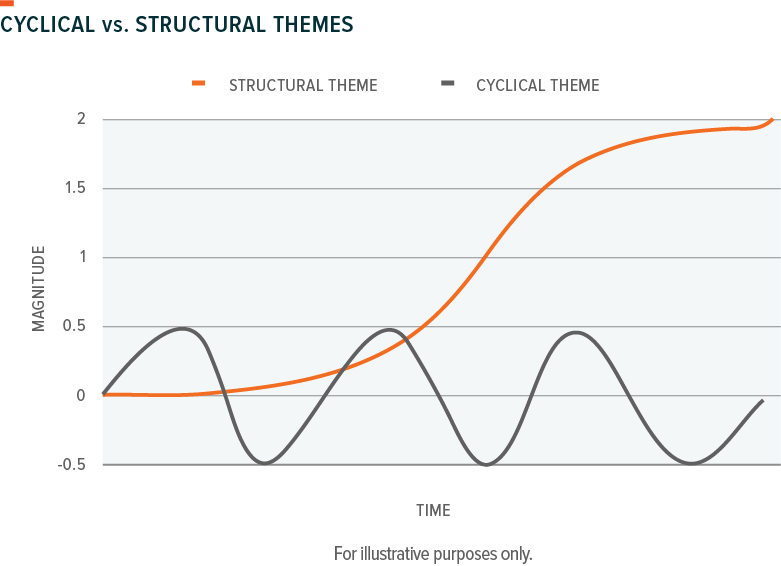 Some areas can be affected by both cyclical and structural trends. Employment levels, for example, can cyclically fluctuate with the economy, as employment typically suffers in recession and benefits from expansion. Structural trends in employment can also occur, such as declining workforce participation rates due to an aging population.

Technology firms can similarly be affected by both cyclical and structural trends. On the cyclical side, tech firms demonstrate sensitivity to economic growth, benefitting from increased personal and business spending. Tech can also participate in structural trends, such as driving advancements in robotics and artificial intelligence that are expected to have a far reaching impact on industrial manufacturing processes, transportation, health care, and other segments of the economy.

We believe long term investors should prioritize identifying structural themes rather than cyclical ones. Given the longer term nature of these themes and their disruptive nature, we have found that structural themes can be less dependent on timing entry and exit points and can be significantly more powerful in magnitude.

Investing involves risk, including the possible loss of principal. The investable universe of companies in which BOTZ and SNSR may invest may be limited. BOTZ and SNSR invest in securities of companies engaged in Information Technology which can be affected by rapid product obsolescence, and intense industry competition. International investments may involve risk of capital loss from unfavorable fluctuation in currency values, from differences in generally accepted accounting principles or from social, economic or political instability in other nations. Emerging markets involve heightened risks related to the same factors as well as increased volatility and lower trading volume. Narrowly focused investments may be subject to higher volatility. There are additional risks associated with investing in lithium and the lithium mining industry. BOTZ, SNSR and LIT are non-diversified.