Is This a Turning Point for Lithium Demand?

At Global X, we’ve been excited about the prospects for lithium as a growth-commodity since the initial launch of our Global X Lithium & Battery Tech ETF (LIT) in 2010. Lithium is used in state-of-the-art batteries because of its advantages in energy density, durability, and voltage versus other common battery types.

In 2010, the case for investing in lithium largely revolved around the growth of consumer electronics, especially smart phones. Superior screens and internet-enabled devices required larger, more powerful batteries and sales of such devices erupted around the world. Yet as depicted in the chart below, lithium demand growth from the consumer electronics segment is expected to level off. 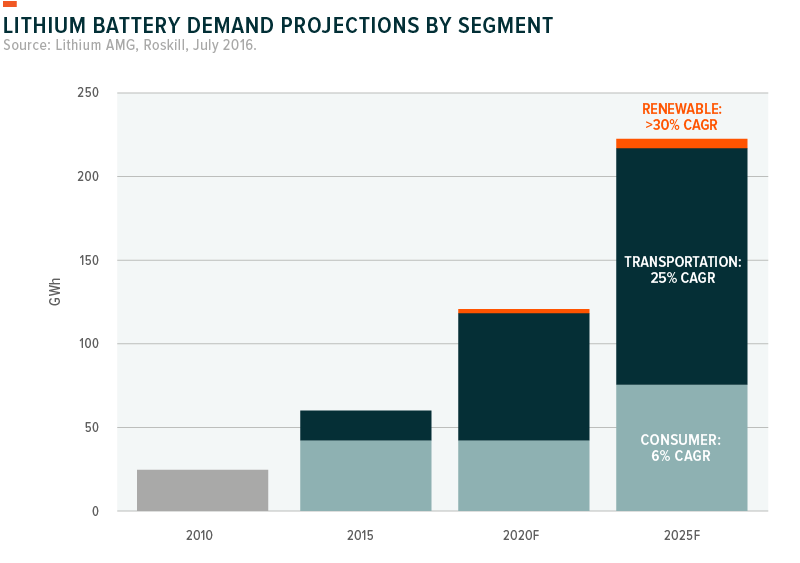 The new x-factor for lithium demand growth is electric vehicles, and to a lesser extent, utility scale energy storage for renewables like wind and solar.

Some of the newest electric vehicles use more than 10,000 times more lithium than a smart phone, meaning that 1 million electric cars would use approximately the same amount of lithium as every smart phone ever sold.1 This figure could be reached surprisingly quickly. Tesla’s upcoming Model 3, designed for the mass market, already had nearly 400,000 pre-orders as of May 2016 when they last reported the figure.2

But a slew of recent announcements suggest that lithium demand is not just coming from the Model 3. Chinese battery producers are scaling up to produce 120 gigawatt-hours per year, a figure that is nearly 3.5 times larger than Tesla’s Gigafactory output, and enough to power 1.5 million electric vehicles per year.3 Demand for these batteries is coming from a variety of automobile manufacturers, who are showing increasing commitments to producing battery powered vehicles. Volvo, for instance, announced that by 2019 all new cars will include an electric motor, meaning they will either be hybrids or fully electric vehicles.4

New regulations and environmental standards are helping to drive demand growth as well. France recently announced that it is aiming to end the sale of gasoline and diesel powered vehicles by 2040. Norway hopes to achieve this goal by 2025, while India is targeting 2030.5 Based on 2016 automobile sales numbers, these three countries could combine for 7.5 million in annual electric vehicle sales if they ban internal combustion engines.6

In addition to electric vehicles, utility scale batteries designed to store intermittent wind and solar energy could also become a major new source of demand. Tesla just announced its building the world’s largest battery to store renewable energy for South Australia, a 100-megawatt unit that is more than 3 times larger than the world’s next largest battery.7 Renewable energy is not a pipe dream; it’s already well on its way. From 2016 to 2018, solar and wind energy output is expected to grow 25% in US and represent over one-third of all power produced.8

3. Bloomberg, “China is About to Bury Elon Musk in Batteries,”

Investing involves risk, including the possible loss of principal. International investing may involve risk of capital loss from unfavorable fluctuations in currency values, from differences in generally accepted accounting principles, or from economic or political instability in other nations. Emerging markets involve heightened risks related to the same factors as well as increased volatility and lower trading volume. Narrowly focused investments may be subject to higher volatility. There are additional risks associated with investing in Lithium and the Lithium mining industry.

Carefully consider the Fund’s investment objectives, risk factors, charges and expenses before investing. This and additional information can be found in the Fund’s full or summary prospectus, which may be obtained by calling 1-888-GX-FUND-1 (1.888.493.8631), or by visiting www.globalxetfs.com. Read the prospectus carefully before investing.