The Quest for a Superbattery

Few things cause more anxiety than a “low battery” notification appearing on your cellphone or laptop. Amid the frenzy of scavenging for a charging cable and racing to find a nearby outlet, it’s not uncommon to wonder: why haven’t we invented a better battery yet? If we can put a man on the moon, surely we can create a battery that actually powers our phones and laptops all day. Or how about an electric vehicle that can drive 500 miles on a single charge, exceeding the range of most gas-powered cars?

Battery runtime isn’t the only thing that matters

The short answer is: it’s complicated. As a starting point, a battery’s runtime is just one of six key dimensions that engineers consider when designing a battery. So while we as consumers are typically focused on runtime with our personal electronics, battery engineers have more on their minds as they look to improve battery technology. The six dimensions they consider are:

Depending on a battery’s application, different features are prioritized over others. For example, in high-end consumer electronics, energy density, safety, and runtime are often the most essential. As a tradeoff, these batteries tend to cost more and have shorter cycle lives. By contrast, batteries intended for grid energy storage require greater cycle lives and lower costs, yet forgo high levels of energy density. Unfortunately, optimizing around all 6 dimensions is difficult given that improving performance measures of runtime, cycle life, energy density, and power often comes at the expense of safety and cost, at least initially.

In order to create batteries that are optimized for certain uses, engineers have developed numerous battery chemistries, each with their own advantages and disadvantages.

Each of these battery chemistries have lithium as a common denominator, qualifying them for the category of ‘lithium-ion’, but they combine the metal with different compounds to achieve certain results.

Adding further complexity, within each of these different battery chemistries, there can be even more sub-types. For example, NMC is a promising chemistry for electric vehicles given that it scores well across density, voltage, and cycle life. Yet the ratio of nickel-to-manganese-to-cobalt can take a variety of forms, such as 1:1:1, 5:2:3, and 6:2:2. Recently, battery engineers have been experimenting with an 8:1:1 chemistry that reduces the proportional amount of cobalt, given concerns about the metal’s supply chain reliability and labor practices. But any tweak to these ratios can result in significant changes to a battery’s scoring on the 6 key dimensions.

The future of lithium-ion battery technology

In the near term, engineers are focused on developing incremental improvements to the existing battery chemistries mentioned above, with an emphasis on reducing costs and improving energy density. While these gains may be hard to notice each year, they can compound over longer time frames, resulting in meaningful advances. Industry experts estimate that lithium-ion batteries have improved their efficiency by 5-10% each year.1 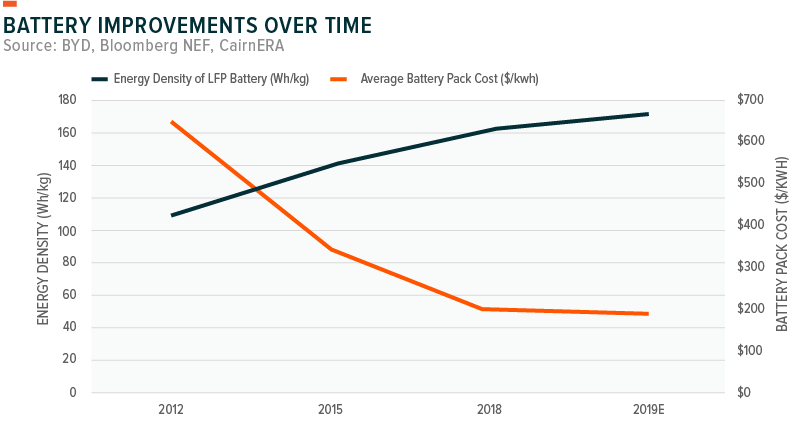 Simultaneously, engineers are racing to develop next-generation battery technologies that could result in exponential improvements over existing products. Such advances could ultimately revolutionize fast-growing areas like electric mobility, renewable energy storage, and consumer electronics. These next-generation technologies include:

While its easy to get excited envisioning the benefits of these new technologies, experts warn that commercial use could still be over a decade away. First generation lithium-ion battery technology itself was not an overnight sensation; it took years to fine-tune the chemistry and to transition the world away from lead-acid based options. Further, testing new batteries for safety and cycle life, while developing cost efficient manufacturing processes, simply takes time – not to mention money and ingenuity.

At this stage, it’s difficult to know exactly when a superbattery will be developed and commercialized, or what form it will take. Given the variety of applications for batteries and their different requirements, it seems unlikely that a single type will become universal. Rather, certain battery chemistries will continue to improve across various dimensions, while engineers explore new forms that redefine the theoretical limits of current technologies.

In the meantime, there’s no substitute for demand. While battery development takes time, continued growth in consumer and commercial use of portable electronics, renewable energy storage, and electric vehicles will drive unprecedented investment in research and development. Such research will accelerate breakthroughs, uncover new technologies, and reduce battery production costs. And eventually, my phone will make it through an entire day.

Investing involves risk, including the possible loss of principal. Narrowly focused investments may be subject to higher volatility. There are additional risks associated with investing in lithium and the lithium mining industry. LIT is non-diversified.

Shares are bought and sold at market price (not NAV) and are not individually redeemed from the Fund. Brokerage commissions will reduce returns. Global X NAVs are calculated using prices as of 4:00 PM Eastern Time. The closing price is the Mid-Point between the Bid and Ask price as of the close of exchange. Closing price returns do not represent the returns you would receive if you traded shares at other times. Indices are unmanaged and do not include the effect of fees, expenses or sales charges. One cannot invest directly in an index.