Significant technological advancements and societal shifts occurred during the 2010s decade. Yet many of these developments became so quickly engrained in our daily lives that they often went relatively unnoticed, and their impact all but forgotten. Over this next decade, the 2020s, we expect similar rapid and meaningful advancements to occur. Moore’s law suggests that over a ten-year period, semiconductors will advance by 32 times, bringing about mesmerizing innovation in the digital age that should not only change technology, but society, as well. In this piece, we review the technological advancements over the last decade and anticipate what revolutionary changes may be in store for us over the next 10 years. 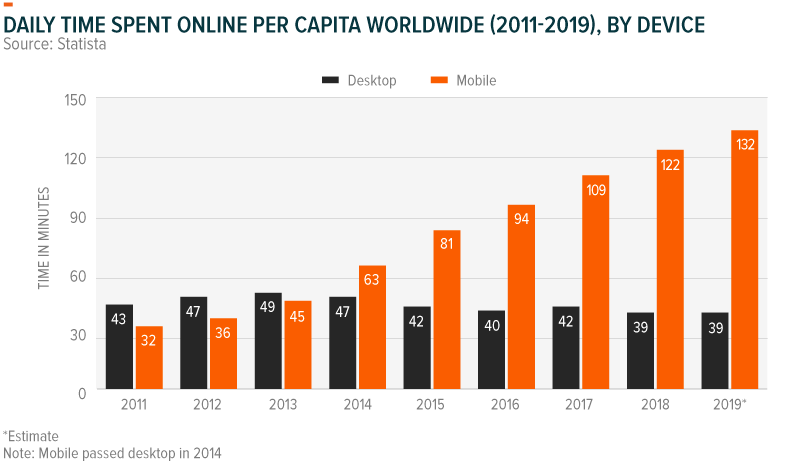 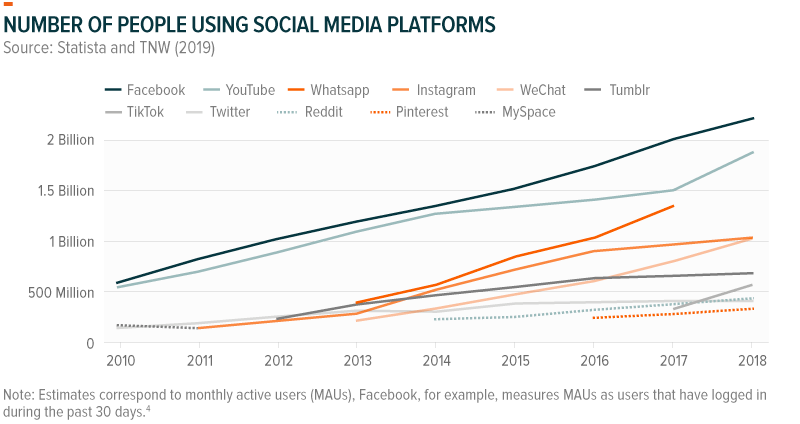 The Dawn of Genomics and Precision Medicine 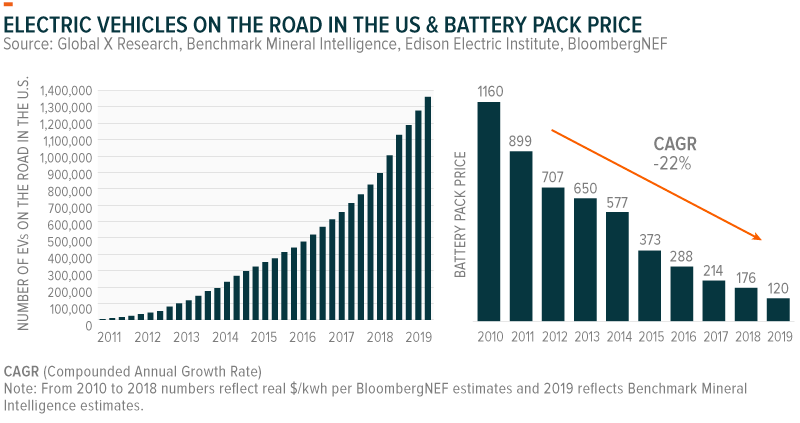 AI and Big Data Took Off

Data storage moved to the cloud

5G’s means more than just a faster internet. It proliferates the mass-adoption of connected devices in homes, cities and enterprises, including those involved in agriculture, health care, manufacturing, and infrastructure. Increasingly, these industries rely on connected devices to gather and analyze data, making processes more efficient, reducing downtime, and freeing up time to focus on new products and initiatives.

Cloud moves to the edge

The continued decline of computing costs and improvements in network infrastructure and artificial intelligence are key drivers of the emergence of edge computing – data processing conducted locally without transmission across a large network. Some technologies require instantaneous data interpretation and can’t rely on networks with higher latency. Autonomous vehicles, robotic surgery, gaming, and smart factories, for example, can require near simultaneous data transmission. Edge computing reduces latency to 5-10 milliseconds from 25-35 milliseconds for early deployed 5G devices.10 A study estimates the economic impact of edge computing to reach $4.1 trillion by 2030.11

Shared autonomous and electric vehicles are expected to cost $0.35 per mile by 2030, less than half the cost of owning a personal sedan ($0.88 per mile).12 By 2030, new car models equipped with self-driving technology are expected to be commonplace. This transition will allow drivers to take their hands off the wheel while their vehicles drive autonomously, or to hail driverless shared robotaxis. Considering that the average American spends 18 days-worth of time driving each year, greater than the average number of vacation days per year (10 days), the productivity and leisure benefits of autonomous vehicles could be enormous. 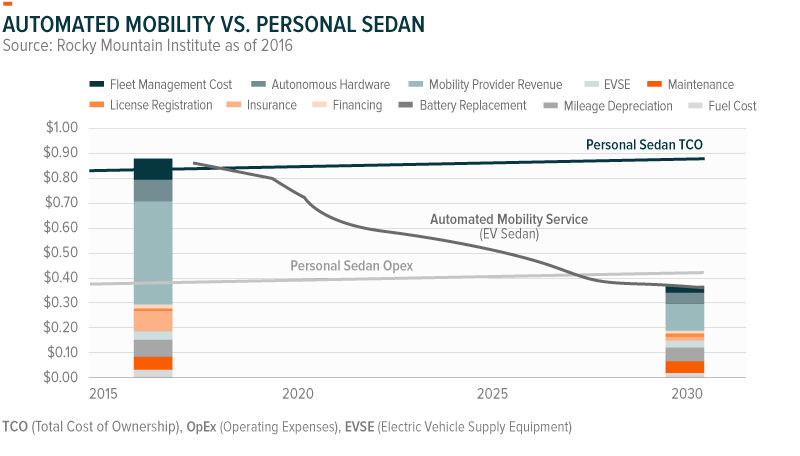 Improvements in artificial intelligence and dexterity are the result of advanced 3D vision capabilities and end-of-arm tooling for precise movements. While the auto manufacturing segment remains robotics’ largest end-market, emerging segments like healthcare and hospitality can benefit from smarter, more capable robots that can conduct surgery, check on patients, cook food, or deliver items to hotel rooms. Agriculture will also see a robotics-driven revolution with automated spraying, monitoring, and picking likely resulting in reduced costs and improved crop yields. The global stock of industrial robots is expected to reach 20 million by 2030, representing a 24% CAGR as robots enter more industries.13

Omnichannel-commerce: Not a zero-sum game between e-commerce and brick-and-mortar

The separation between e-commerce and brick and mortar retail will blur as digital and physical shopping experiences become one in the same. Augmented reality will give consumers the ability to try on and order clothes from the comfort of their homes, but physical stores with reduced footprints will feature unique consumer experiences, immediate purchases, and try-before-you-buy optionality. Coupled with IoT technologies that track consumer behavior and build datasets around it, and advances in AI, retailers could be able to predict consumer behavior at almost 100% accuracy. We also expect to see e-commerce as a value add for small and mid-sized businesses, providing a medium for them to sell products outside of their locality and giving a means of accessing global consumer-bases.

As the population ages, there will be increasing pressure to reduce costs, improve patient outcomes, and optimize physicians’ time.  All of this is possible by leveraging telemedicine and artificial intelligence – two technologies that are set to disrupt health care. Telemedicine offers an alternative solution to in-person doctor visits, providing diagnostic and clinical services to patients around-the-clock, from the convenience of one’s home or workplace. Currently, telemedicine utilization rates remain below 10% in the U.S., but penetration is likely to grow as technology reduces costs and adds convenience.14 Further digitalization of health care will also enable new use cases for AI. Recent developments like AI-driven, real-time MRI interpretation could mean enhanced diagnoses and treatments across other health care verticals, in addition to its use in telemedicine as an AI chatbot for triage or basic medical advice.

Genomics: The potential to cure the previously incurable

Advances in genomics could offer the first realistic opportunity to cure certain illnesses previously deemed fatal. Scientists have identified more than 50,000 genetic diseases caused by a single gene mutation in humans, known as Mendelian diseases. These are likely to be the first diseases treated through gene editing techniques.15 As the medical and scientific communities’ understanding of gene expression and protein pathways improves and genomic sequencing costs continue to fall, we expect a vast increase in the number of tested and proven genomic therapies.

The 2010s were a decade of phenomenal innovation, led largely by the transition to mobile and the rise of data, which accelerated the growth of AI, e-commerce, social media, and biotechnology. In the 2020s, additional foundational changes will take place as data latency shortens and AI algorithms improve. Such progress should enable new technologies to flourish, including autonomous vehicles, conversational AI, the massive internet of things, and augmented and virtual reality. As new technologies are introduced to the market place, they will have a profound impact on our lives, workplaces, and even investments as they reshape the economy.

4. Note: Estimates from Statista correspond to yearly averages (Statista publishes monthly or quarterly figures). Estimates from TNW correspond to the first figure provided for the corresponding year (TNW published an animation with interpolated data). Estimates for Facebook, Twitter, Instagram, Whatsapp, and Pinterest are taken from Statista. All other series come from TNW. TNW does not provide details regarding their underlying sources but our analysis suggests their estimates are consistent with primary sources and reports such as company earnings press releases, official company websites, and published articles. Statista uses monthly active users to measure social media platform usage. Statista specifies “Facebook measures monthly active users (MAUs) as users that have logged in during the past 30 days. Users are counted separately for Facebook and other apps. Statista specifies “Figures do not include Instagram or WhatsApp users unless they would otherwise qualify as such users, respectively, based on their other activities on Facebook.”

Healthcare, Pharmaceutical, Biotechnology and Medical Device companies can be affected by government regulations, expiring patents, rapid product obsolescence, and intense industry competition. The risks related to investing in cloud computing companies include disruption in service caused by hardware or software failure, interruptions or delays in service by third-party data center hosting facilities and maintenance providers, security breaches involving certain private, sensitive, proprietary and confidential information managed and transmitted by cloud computing companies, and privacy concerns and laws, evolving Internet regulation and other foreign or domestic regulations that may limit or otherwise affect the operations of such companies.

Investing in securities engaged in the social media industry include disruption in service caused by hardware or software failure; interruptions or delays in service by third-parties; security breaches involving certain private, sensitive, proprietary and confidential information managed and transmitted by social media companies; and privacy concerns and laws, evolving Internet regulation and other foreign or domestic regulations that may limit or otherwise affect the operations of such companies.

Information Technology companies can be affected by rapid product obsolescence, and intense industry competition. Risks include disruption in service caused by hardware or software failure; interruptions or delays in service by third-parties; security breaches involving certain private, sensitive, proprietary and confidential information managed and transmitted; and privacy concerns and laws, evolving Internet regulation and other foreign or domestic regulations that may limit or otherwise affect the operations.