The causal relationship between human activities and rising greenhouse gas (GHG) emissions and temperatures is “unequivocal,” according to the Intergovernmental Panel on Climate Change (IPCC).1 Notably, the transportation sector accounts for the second-largest share of global GHG emissions caused by human activities, behind power generation.2 Key to reducing transport-related emissions is the mass adoption of electric vehicles (EVs), particularly the zero-emissions technologies of battery electric vehicles (BEVs) and hydrogen fuel cell electric vehicles (FCEVs). Together, these technologies can transform transport across all vehicle segments.

In this report, we compare these EV technologies and explore their upstream and downstream investment implications as the energy transition gathers momentum.

EV adoption is accelerating as governments and corporations work towards meeting climate change-related emissions reduction targets. Globally, 6.5 million EVs were sold in 2021, accounting for just under 9% of annual total car sales.5,6 While the EV segment’s share remained small compared to ICE vehicles, 2021 marked a significant increase from the 3.3 million EVs sold in 2020 and the 2.3 million sold in 2019.7 The EV momentum continued into January 2022, particularly in major markets. EV sales increased by 122% in China and 94% in the United States compared to January 2021.8 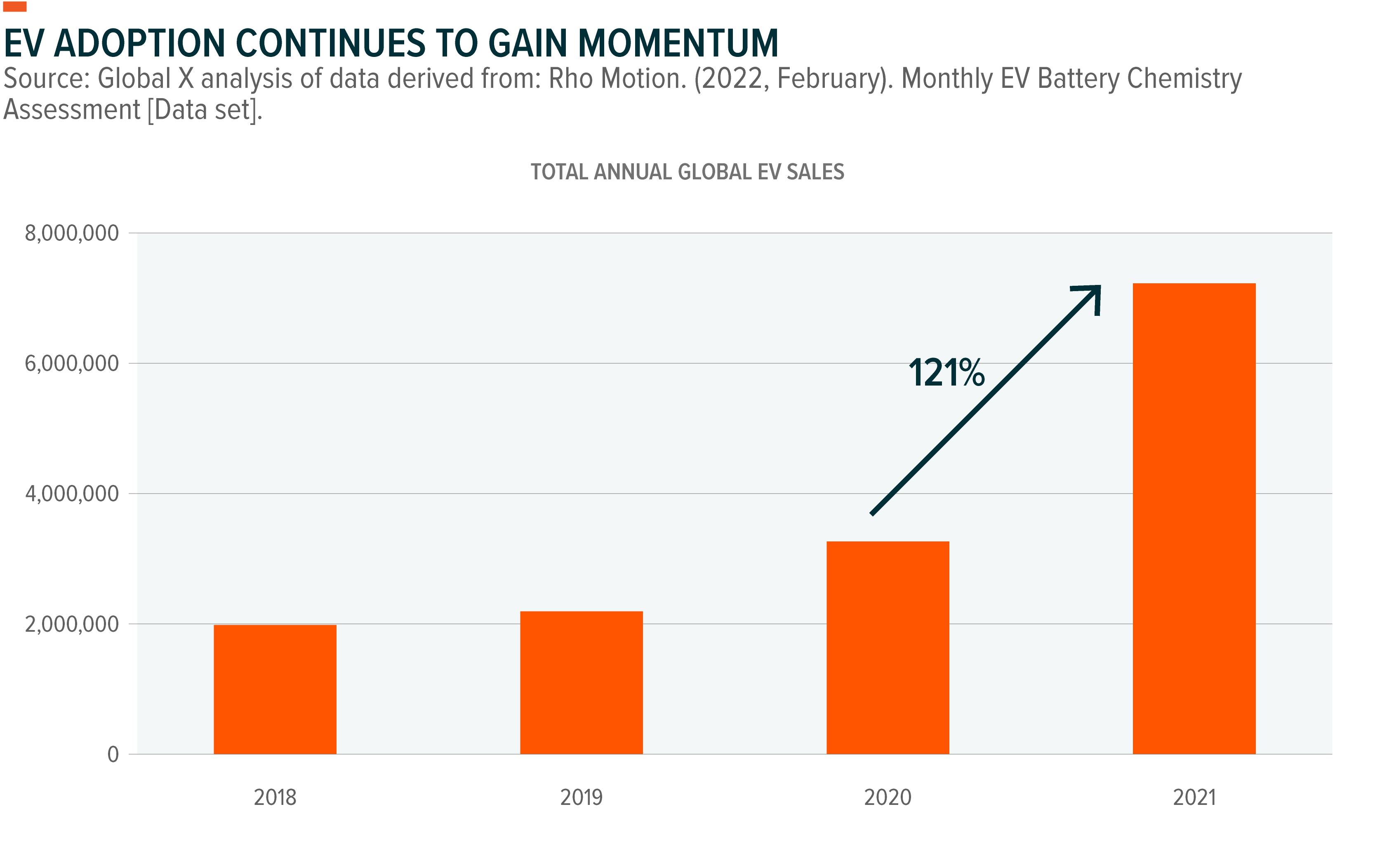 Industry forecasts have EVs reaching a 36% penetration rate by 2030, representing a $1.4 trillion opportunity.9,10 Supporting these forecasts is an increasingly positive policy landscape for EV adoption. Over 135 countries have economy-wide net-zero emissions targets, with many aiming for 2050 or earlier.11 Furthermore, over 20 countries have 100% electrification sales targets for cars over the next two decades.12 Norway aims to reach 100% zero-emissions vehicles sales by 2025, the most ambitious target of any country.13 Many countries have established support mechanisms and allocated funding to encourage EV adoption and the expansion of supporting EV charging infrastructure.

Additionally, at the 2021 United Nations Climate Change Conference, COP26, 15 countries signed the first-ever global agreement for net-zero emission trucks and buses, including Turkey, Denmark, Chile, Canada, and the United Kingdom, as well as a handful of sub-national governments and manufacturers, such as Scania and DHL. The Global Memorandum of Understanding for Zero-Emission Medium- and Heavy-Duty Vehicles establishes a target for 100% zero-emission new truck and bus sales by 2040, with an interim goal for 30% zero-emission sales by 2030 for its signatories.14 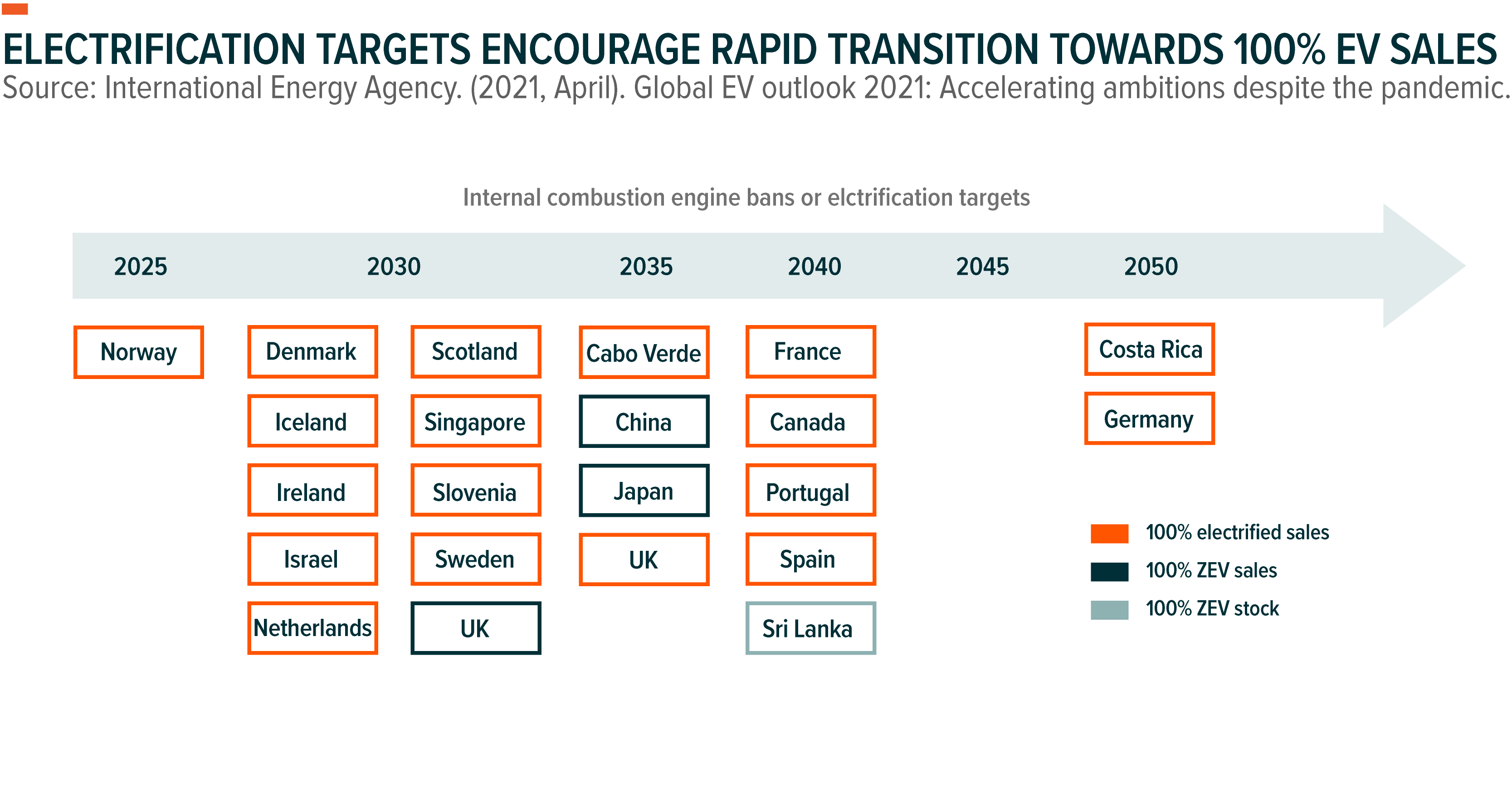 Original equipment manufacturers (OEMs) are also committed to electrifying their fleets and transforming the sector from majority ICE vehicles to EVs. In March 2022, Ford announced that it is restructuring to separate its EV and ICE businesses. Under its new EV unit, called Ford Model e, the company plans to produce 2 million EVs annually by 2026.15 General Motors, Kia Corporation, Jaguar Land Rover, Mercedes-Benz, Volvo, and Volkswagen are also among the large list of OEMs that plan to spend billions on EVs to hit electrification sales targets.16

A result of climate mitigation efforts by governments and electrification commitments by OEMs is an increasingly complex landscape of electric vehicle technologies. EVs fall into one of two categories in relation to their greenhouse gas emission outputs: 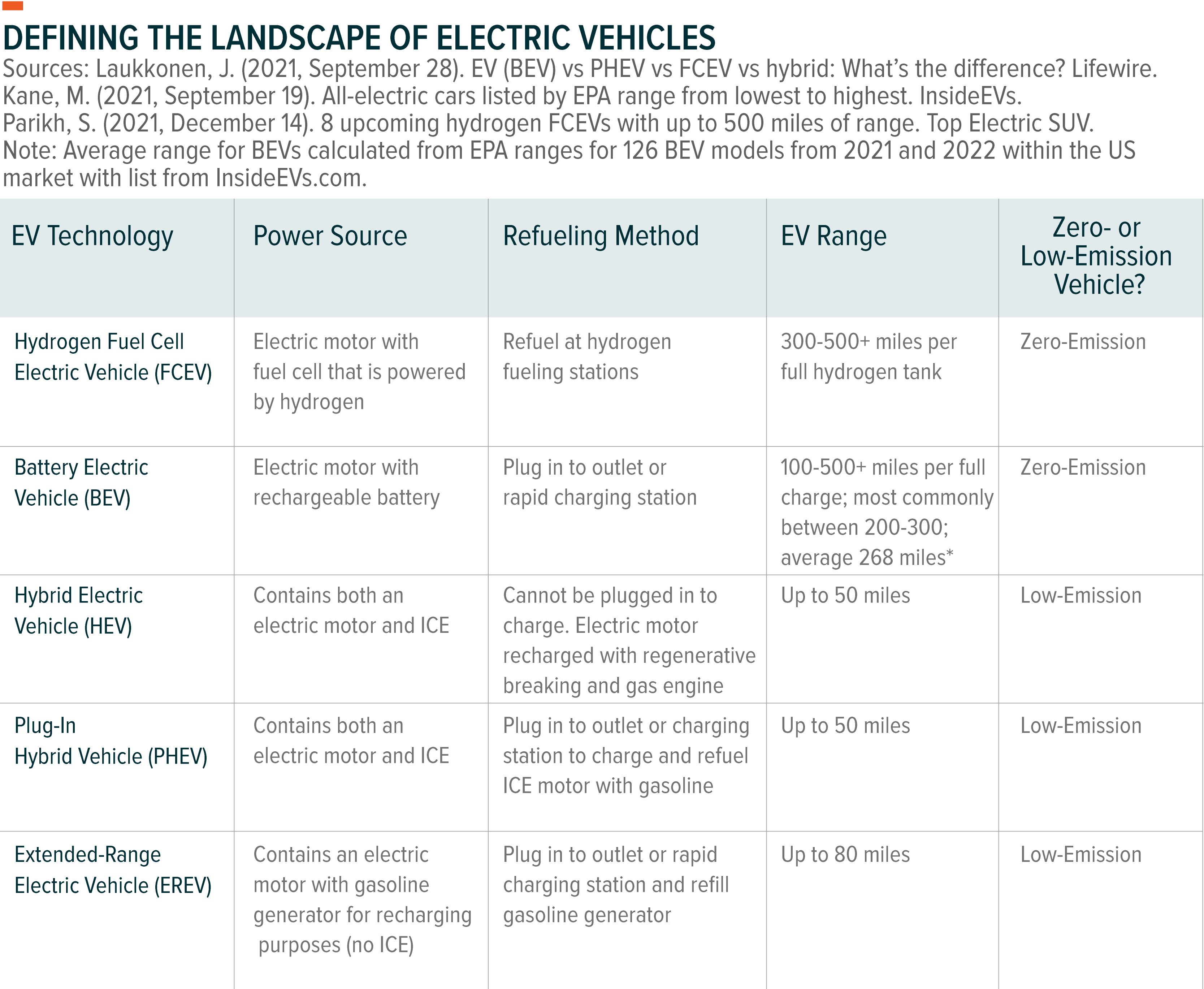 BEVs are clearly the passenger car of choice among EVs, accounting for 71% of sales in 2021, while hybrid EVs made up roughly 28% and FCEVs less than 1%.22 We expect BEVs to continue to solidify their leadership in the segment and gain ICE vehicles’ market share over the coming years. Hundreds of BEV models are for sale globally as of March 2022, as opposed to only a handful of FCEV models.23,24 Additionally, several OEMs plan to increase their BEV offerings significantly, with well over 100 new models set to come to market over the coming decade.

For example, in March 2022, Kia Corporation announced that it will launch at least two BEVs per year starting in 2023.25 The company’s goal is to have a line-up of 14 BEVs by 2027, including three passenger, eight SUV, and three pick-up/commercial models.26 Also in March, Hyundai announced plans to introduce 17 new BEV models by 2030.27 In contrast, OEMs plan to introduce only about 12 new FCEV models over the next decade or so.

BEVs come with the potential benefit of lower scheduled maintenance costs due to fewer parts than ICE vehicles and the potential for sizeable fuel savings.28 BEV drivers can also tap into a much more advanced charging infrastructure network than the highly limited hydrogen fuelling station network for FCEVs. The United States has only 48 hydrogen refuelling stations, with all but one located in California.29 Conversely, the United States has nearly 46,500 public EV charging stations and the government aims to deploy a network of 500,000 chargers nationwide by 2030.30,31

Europe has 152 hydrogen refuelling stations and another 40 in development, compared to over 150,000 public EV charging stations currently and forecasts for over 2 million more to be built by 2030.32,33 In Asia, China and Japan have more robust hydrogen refuelling station infrastructure in place and plans for substantial expansions over the coming decade. However, these networks pale in comparison to over 1 million charging stations in China and roughly 30,000 in Japan today.34,35

As BEV growth increases, we expect significant growth opportunities to emerge throughout the entire BEV supply chain, including in EV lithium-ion battery production and lithium mining. Global EV battery manufacturing capacity is expected to explode over the next decade from 631GWh in 2020 to 2,913GWh in 2030.36 Europe is becoming the fastest-growing region for EV battery production outside of China. The region’s EV battery cell production pipeline capacity could increase to more than 789GWh by 2030, which is enough to produce 15 million BEVs each year.37 Conversely, the lithium market faces its largest-ever shortage in 2022, due to delays in new mining projects from the COVID-19 pandemic.38 Lithium mining needs to ramp up even more quickly over the coming years than currently planned to avoid a long-term deficit, higher EV costs, and weakened EV demand.39 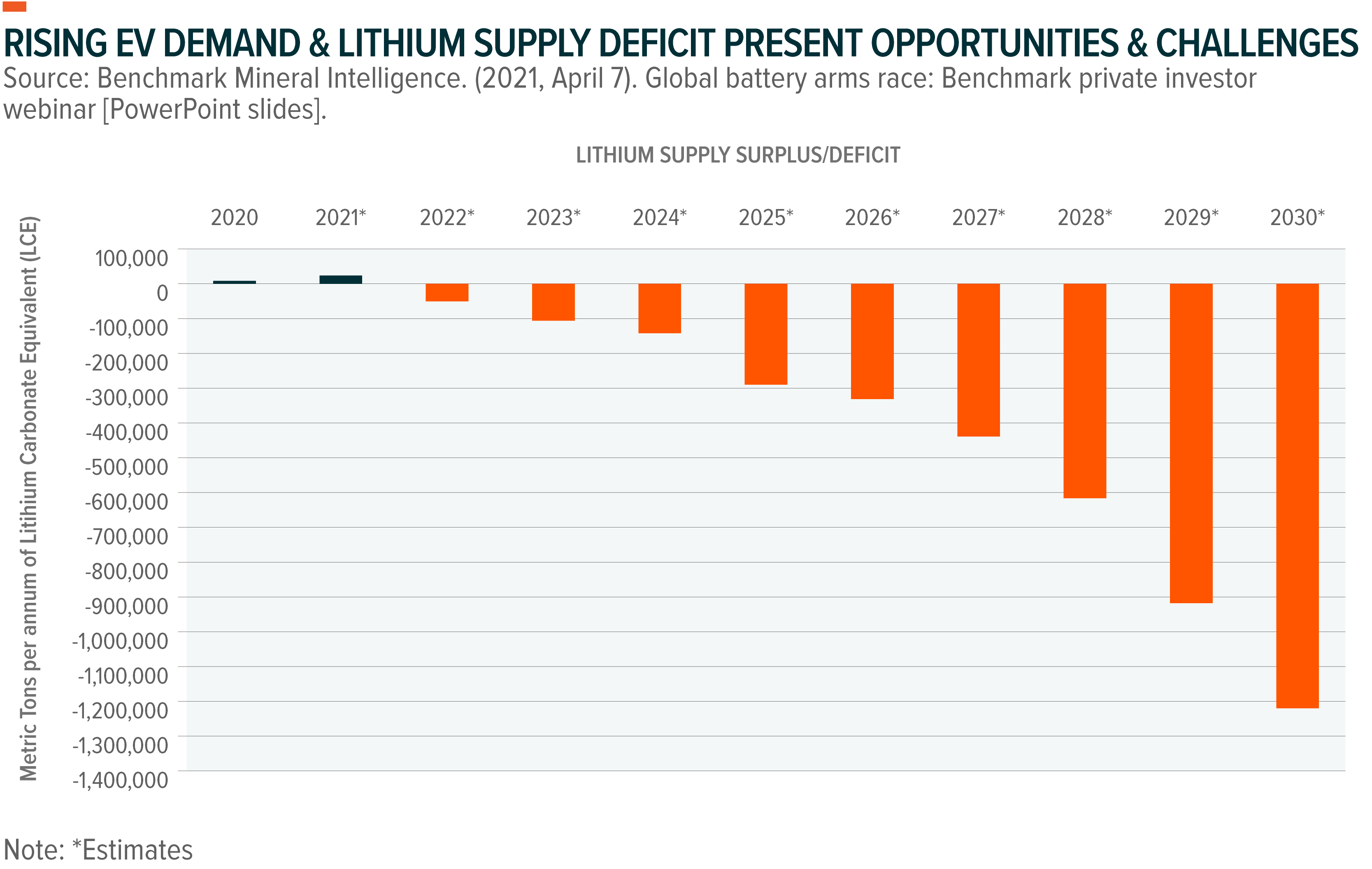 Global interest in scaling up low-carbon green hydrogen production for use in transport and hard-to-electrify industries has several major companies creating plans to adopt FCEVs for trucking and heavy industry operations. On the manufacturing side, leading truck makers, such as Daimler Truck AG and Volvo Group, are fully committed to an all-electric future and formed a joint venture to produce hydrogen fuel cell systems.45 Daimler Truck, the world’s largest manufacturer of heavy trucks, aims to focus solely on zero-emission vehicles by 2035.46 A key interim goal for Daimler Truck is to make long-haul fuel-cell trucks that achieve cost-parity with diesel trucks by 2027, and the company is well on its way, as testing continues on the GenH2 truck, which offers a range of up to 600 miles.47 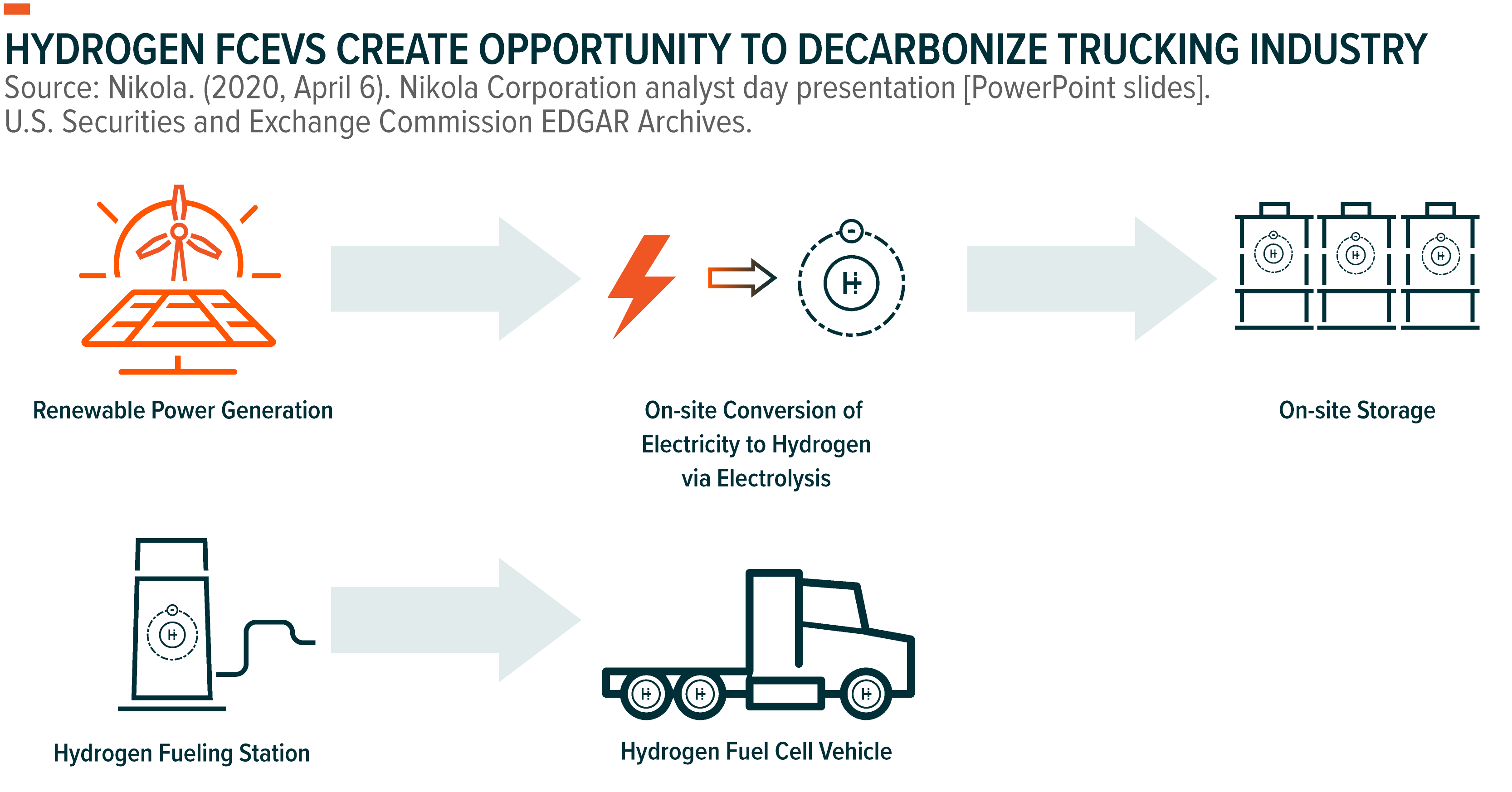 On the heavy industry side, the mining sector stands out as an early adopter of FCEVs, with companies like Anglo American, Fortescue Metals Group, and Antofagasta all working to implement FCEV technology. In 2021, Fortescue Future Industries, a subsidiary Fortescue Metals Group, began testing hydrogen fuel cell-powered haul truck and drilling rig technologies.48 The company aims to begin using the FCEVs by the second half of the decade and has a goal to be carbon-neutral by 2030.49

Sparse hydrogen fuelling networks globally will remain the primary barrier to the widespread adoption of FCEVs in the near term. However, we expect more fuelling stations as hydrogen gains acceptance, particularly in the long-haul trucking industry. On January 31, 2022, Blackrock Inc, Daimler Truck Holding AG, and NextEra Energy announced a joint venture to build and operate a $650 million battery charging and hydrogen refueling station network in the United States.50 The initial focus will be critical freight routes on the East and West Coasts and in Texas for medium- and heavy-duty vehicles.51

Additional challenges include lower efficiencies and higher costs compared to BEVs.52 That said, sizeable cost declines and technology improvements are set to materialize over the coming years as FCEV vehicles and electrolyzers for green hydrogen production are scaled up, which we expect to create growth opportunities. The U.S. Department of Energy projects that FCEV medium- and heavy-duty trucks will be cheaper than diesel-powered trucks by 2035, while green hydrogen could become a cost-competitive fuel source by 2030.53,54

We believe that BEVs and FCEVs are on track to increase their market share as part of the global effort to slow climate change, given the segment’s increasing share of total car sales and the growing momentum for EV adoption. For investors, the growing number of BEV passenger car models for sale and under development and the rapidly expanding BEV charging network can create investment opportunities throughout the BEV supply chain. Critically, lithium mining and battery manufacturing will need to ramp up to meet demand and for BEV growth to materialize. For long-haul trucking and heavy-duty vehicles, FCEVs offer benefits such as lighter vehicle weights and shorter refuel times. Demand for FCEV technologies, particularly in support of fuel infrastructure, appear set to materialize over the long term, creating additional opportunities for differentiated exposure in the EV space.

HYDR:The Global X Hydrogen ETF (HYDR) seeks to invest in companies that stand to benefit from the advancement of the global hydrogen industry. This includes companies involved in hydrogen production; the integration of hydrogen into energy systems; and the development/manufacturing of hydrogen fuel cells, electrolyzers, and other technologies related to the utilization of hydrogen as an energy source.

Investing involves risk, including the possible loss of principal. The companies in which DRIV invests may be subject to rapid changes in technology, intense competition, rapid obsolescence of products and services, loss of intellectual property protections, evolving industry standards and frequent new product productions, and changes in business cycles and government regulation. International investments may involve risk of capital loss from unfavorable fluctuation in currency values, from differences in generally accepted accounting principles, or from economic or political instability in other nations. Emerging markets involve heightened risks related to the same factors as well as increased volatility and lower trading volume. There are additional risks associated with investing in mining industries. Hydrogen companies typically face intense competition, short product lifecycles and potentially rapid product obsolescence. They may be significantly affected by fluctuations in energy prices and in the supply and demand of renewable energy, tax incentives, subsidies and other governmental regulations and policies. Investments in smaller companies typically exhibit higher volatility. DRIV, LIT, and HYDR are non-diversified.

This information contains a manager’s opinion, is not intended to be individual or personalized investment or tax advice and should not be used for trading purposes.