The showroom floor at CES 2022 was quieter than in previous years with many companies canceling their on-site presentations due to omicron. But the robust mix of in-person and virtual presentations demonstrated that the pipeline for innovation in technology products remains as exciting as ever. Video game companies announced their latest technologies to enhance the metaverse. Many traditional auto original equipment manufacturers (OEMs) unveiled their latest commitments to electric and autonomous vehicles (EVs/AVs). And the Internet of Things (IoT) ecosystem signaled the end of closed ecosystems and the rise of interoperability.

In this piece, we share our highlights from CES and elaborate on the trends that are reshaping technology in 2022.

Video Games Get More Life-Like in the Metaverse

Typically, the Electronic Entertainment Expo (E3) is the video game industry’s showcase event for new products. But this year companies used CES to introduce some of their latest technologies and build on the recent momentum surrounding the metaverse. Many of the new hardware products seek to an enhance immersive experiences using augmented reality (AR), virtual reality (VR), and mixed reality (MR). According to one estimate, the AR, VR, and MR market could nearly double from $31 billion in 2021 to $59 billion this year, and grow to a whopping $297 billion as early as 2024. 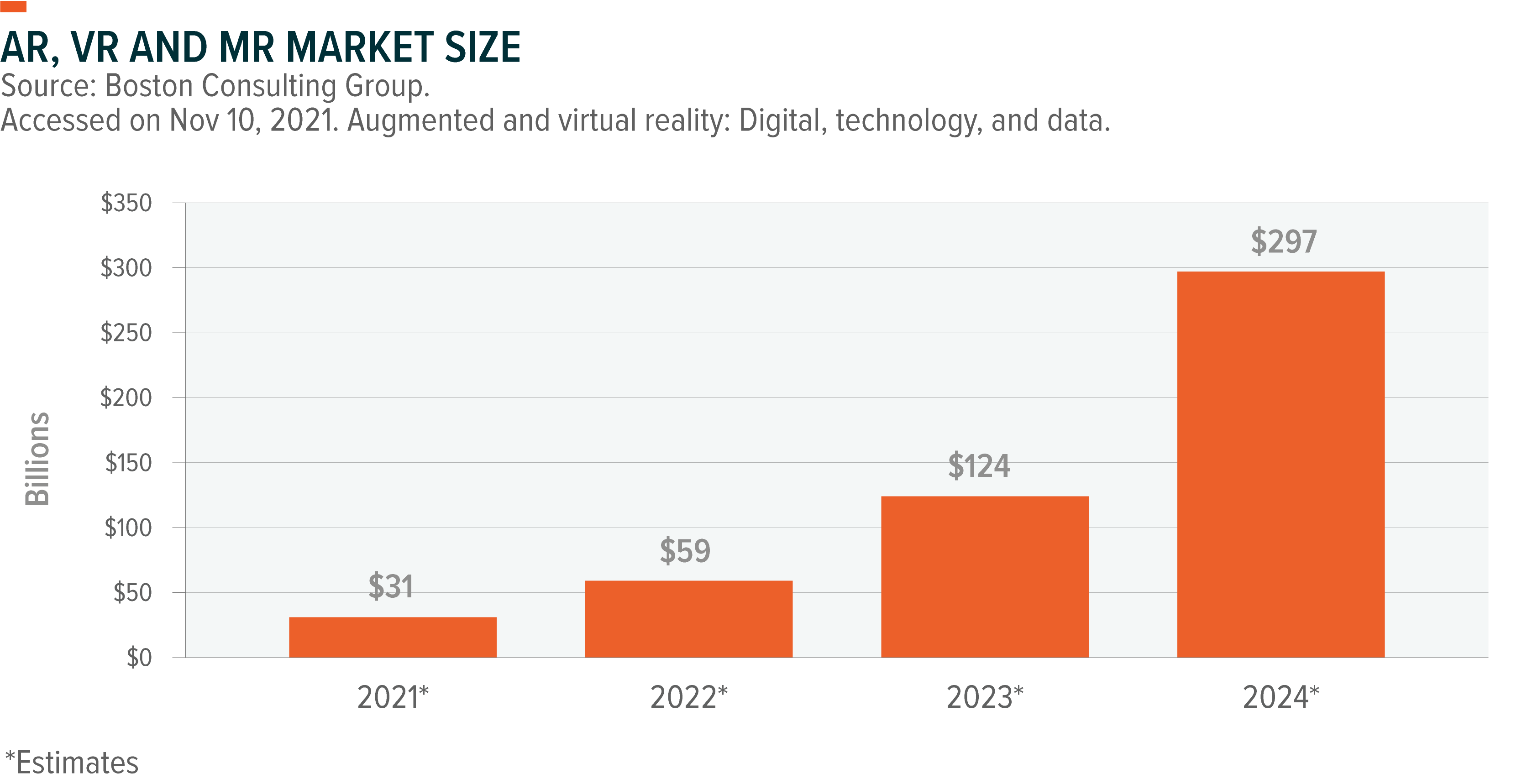 Sony debuted the highly anticipated PlayStation VR 2 (PSVR 2), its follow-up to the first virtual reality headset compatible with PlayStation 4 that it launched in 2016. With PSVR 2, Sony focused on creating a more immersive audio and visual experience through cutting-edge software such as a 110-degree view, 3D audio, a single cord USB-C connection, and the first eye tracking available in the consumer market. PSVR 2 also includes an OLED display with inside-out tracking, which makes the need for exterior cameras obsolete. Sony also introduced a new game, Horizon: Call of the Mountain, that is expected to bring a new level of immersion to gameplay.

Shiftall, a Panasonic subsidiary, unveiled two VR wearable tech products, the HaritoraX bodysuit and Pebble Feel. HaritoraX is a full-body tracking device compatible with StreamVR that focuses on the user’s ankles, chest and thighs. Pebble Feel heats and cools the user, allowing them to feel temperature changes while exploring a digital world. Along similar lines, Owo Game introduced a virtual second skin with its Haptic Vest, which allows the wearer to feel different upper-body sensations such as hugs and punches.

From a different angle, Nvidia’s take on the metaverse is the omniverse it created for engineers. The company announced that it is developing a free version of its omniverse for Nvidia GeForce Studio, a real-time 3D design collaboration and simulation platform. The idea is to increase collaboration between engineers, 3D designers, and content creators, and to provide greater access to more omniverse-ready assets. This omniverse remains decentralized by using interconnected and interoperable virtual worlds for business, entertainment, and socializing. Nvidia’s omniverse is now available to users of the GeForce RTX and NVIDIA RTX graphic processing units (GPUs).

Electric vehicles have become a CES staple in recent years. Historically, the show allowed luxury carmakers to showcase high-end sedans and roadsters like the Tesla Model S, Lucid Air, and Porsche Taycan. This year’s CES retained some of that luxury feel with Mercedes-Benz Vision EQXX’s head-turning 620-mile range and BMW’s iX Flow, the first car that can change colors using E-ink. But CES 2022 marked a shift with traditional OEMs showing more commitment to electrifying their fleets for everyday consumers.

Chrysler and Chevrolet unveiled a line of affordable, family-friendly, long-range vehicles. The 2022 Chevy Equinox is a functional SUV with an affordable base price of $30,000, well below the current Kelley Blue Book average EV price of $51,532.1 Chevy also introduced its Silverado EV, which sold out in only 12 minutes.2 This futuristic take on the modern pickup truck has an impressive range of more than 400 miles per charge, which compares to the current U.S. average EV of range 250 miles.3 Chrysler’s Airflow is also built for the long haul with an estimated charge range of 350–400 miles.

Our survey from Charting Disruption 2022 showed that the biggest concerns consumers have about purchasing an EV are range and high initial cost. Based on what we saw at CES 2022, it looks like the automobile industry is addressing those issues head-on. 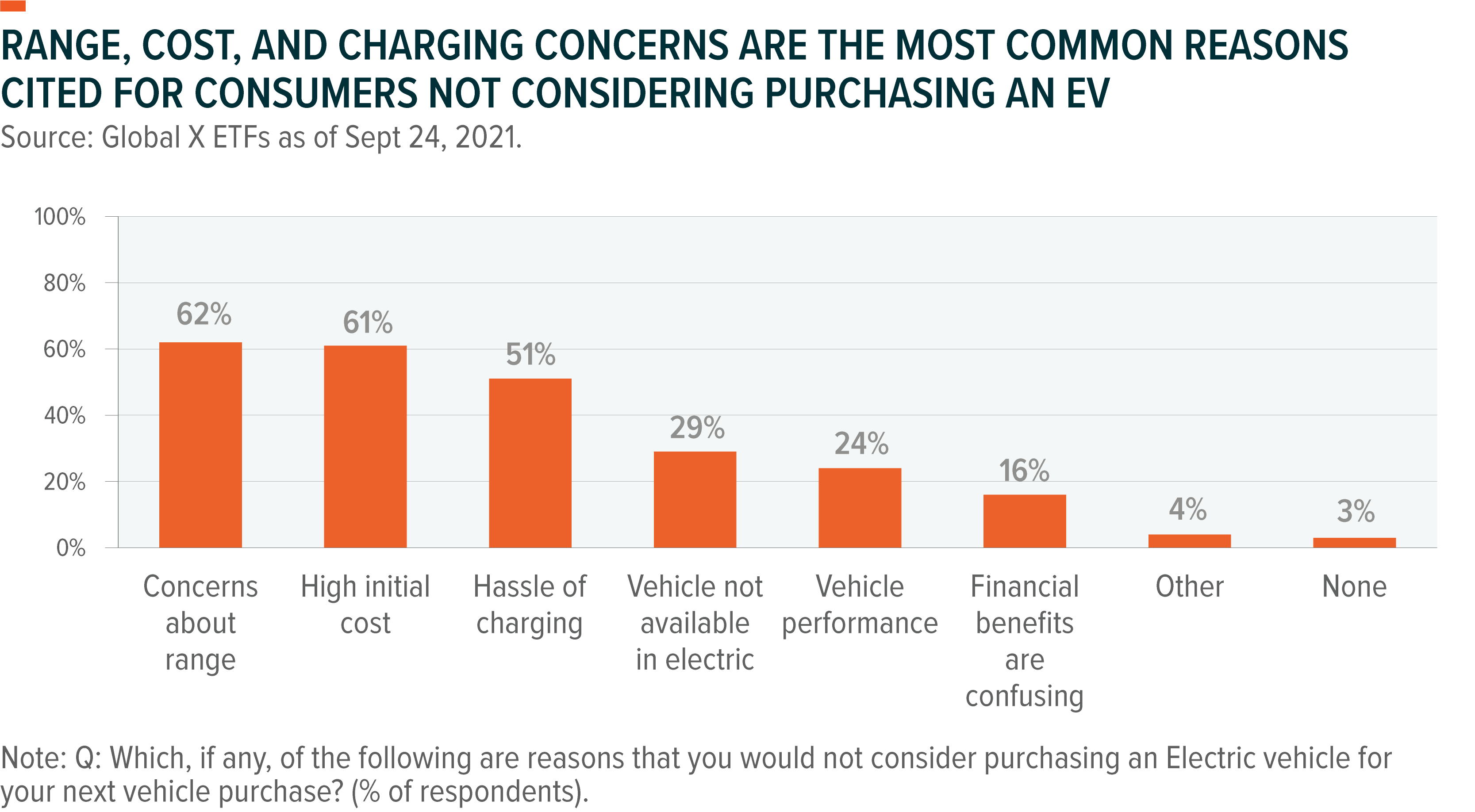 On the agtech side, John Deere revealed its first fully autonomous electric tractor for large-scale production. Available later this year, the tractor uses images captured by deep neural networks for navigation. Three cameras located in the front of the tractor and three in the back classify each pixel in approximately 100 milliseconds, allowing the tractor to stop automatically when it sees objects in its path. Farmers will also be able to monitor the tractor through a smartphone app. Such technology could help reduce emissions and operating costs, as well as allow for improved yields.

An Ecosystem for a Unified Internet of Things Emerges

Unified, connected devices can make the IoT theme even more appealing to consumers, in our view. For example, Amazon announced that Alexa will be cross-compatible with other voice assistants, letting the end user decide what app or voice assistant controls their smart device. Another possible scenario is a user connecting their home’s smart windows and doors to their Amazon air quality monitor to notify them of, say, a carbon monoxide leak.

Like always, CES offered glimpses of what the future may hold for technology products. But this year’s event marked a shift from past events in that many of the emerging technologies are designed for everyday use and for everyday consumers. The use cases seem endless, whether in increasingly connected smart homes, more efficient and affordable EVs, and more life-like virtual worlds. We believe that many of the technologies and products on display can disrupt traditional sectors and consumer behaviors, and likely sooner than later.

HERO – The Global X Video Games & Esports (HERO) seeks to invest in companies that develop or publish video games, facilitate the streaming and distribution of video gaming or esports content, own and operate within competitive esports leagues, or produce hardware used in video games and esports, including augmented and virtual reality.

SNSR – The Global X Internet of Things ETF (SNSR) seeks to invest in companies that stand to potentially benefit from the broader adoption of the Internet of Things (IoT), as enabled by technologies such as WiFi, 5G telecommunications infrastructure, and fiber optics. This includes the development and manufacturing of semiconductors and sensors, integrated products and solutions, and applications serving smart grids, smart homes, connected cars, and the industrial internet.

Investing involves risk, including the possible loss of principal. Video Game and Esports Companies are subject to risks associated with additional regulatory oversight with regard to privacy/cybersecurity concerns, shifting consumer preferences, and potential licensing challenges. HERO, SNSR and DRIV invest in securities of companies that can be affected by rapid product obsolescence and intense industry competition.

The companies in which DRIV invests may also be subject to rapid changes in technology, loss of intellectual property protections, evolving industry standards and frequent new product productions, and changes in business cycles and government regulation.

International investments may involve risk of capital loss from unfavorable fluctuation in currency values, from differences in generally accepted accounting principles, or from economic or political instability in other nations. Emerging markets involve heightened risks related to the same factors as well as increased volatility and lower trading volume. Narrowly focused investments may be subject to higher volatility. There are additional risks associated with investing in lithium and mining industries. The Global X Funds discussed are non-diversified.