Earnings reports from major social media platforms highlighted that no company is immune to the slowdown in digital advertising spend amid recessionary concerns. Alphabet Inc. reported that YouTube ad revenue slid roughly 2% year-over-year (YoY) to $7.07 billion in Q3 2022.1 For Google, verticals such as insurance, loans, and mortgages pulled back significantly.2 However, travel and retail were positives for Google Services revenue.3 Snapchat stated that marketing budgets for their ad partners are lower due to operating headwinds, inflationary pressures, and rising cost of capital. Meta’s ad revenue decreased 4% YoY to $27.2 billion.4

On the positive side, user engagement continued to grow. Snapchat’s daily active users (DAU) beat projections by increasing 19% to 363 million in Q3.5 Facebook’s monthly active users (MAUs) totaled 2.96 billion as of Q3, up 2% YoY.6 Also, 3.71 billion users logged in to at least one of Meta’s apps (Facebook, Instagram, WhatsApp, or Messenger), a 4% YoY increase.7

A year ago, each of the top three Hyperscalers reported revenue growth of over 40%, but growth slowed in Q3 2022. Amazon Web Services’ revenue grew 27% YoY and Microsoft Azure’s 35% YoY.8,9 For Azure, consumption revenue growth continued to moderate, and higher energy costs hurt its gross margin. Google Cloud’s revenue increased 38% YoY.10 The $600 million increase since Q2 was the same as Azure’s – indicating that Google Cloud is aggressively adding share against its other two bigger rivals.11 Despite what moderating industry growth in Q3 suggests, we expect businesses to continue to invest in critical long-term projects such as infrastructure tools, monitoring systems, software defined networking, and security software.

The U.S. Food and Drug Administration (FDA) plans to review Roctavian, Biomarin’s late-stage gene therapy for hemophilia. The company resubmitted Roctavian for approval in September. The timeline is somewhat uncertain, but BioMarin expects a decision by the end of March 2023. Roctavian is designed to treat hemophilia type A, the disease’s most common form. The treatment involves using a specified virus to deliver a modified copy of the gene, which creates a blood-clotting protein that patients suffering from the disease lack. Despite presenting positive results from late-stage trials, the FDA required further monitoring for at least two years. Biomarin remains hopeful that it will receive approval, given continued positive results from patients. Earlier this year, Roctavian was approved in Europe as the first hemophilia type A gene therapy.

Pacific Bioscience is ramping up production of DNA sequences with its first short-read device and upgrading its preexisting long-read hardware. The upgrade, named the Revio system, will be capable of sifting through long strings of genetic code with capacity for more than three human genomes per day at a cost of less than $1,000 per piece.20 Revio will help with cancer and agricultural genomics research and development (R&D). It will be PacBio’s first sequencer using Nvidia GPUs to bring a 20-fold increase to computing power.21

In October, the Biden Administration implemented what is considered to be the most significant sanction on technology exports to China in decades. By imposing a limit on sales of advanced semiconductor chips, the administration wants to cut off critical technology to contain China’s technology and military ambitions. Under the rules, U.S. companies must obtain a license to sell equipment to Chinese chipmakers that intend to produce advanced chips. China is a primary consumer of semiconductors, yet only produces about 15% of the global output.22 Thus far, the restrictions have been manageable for chipmakers such as Nvidia, Intel, and Taiwan Semiconductor Manufacturing Company. 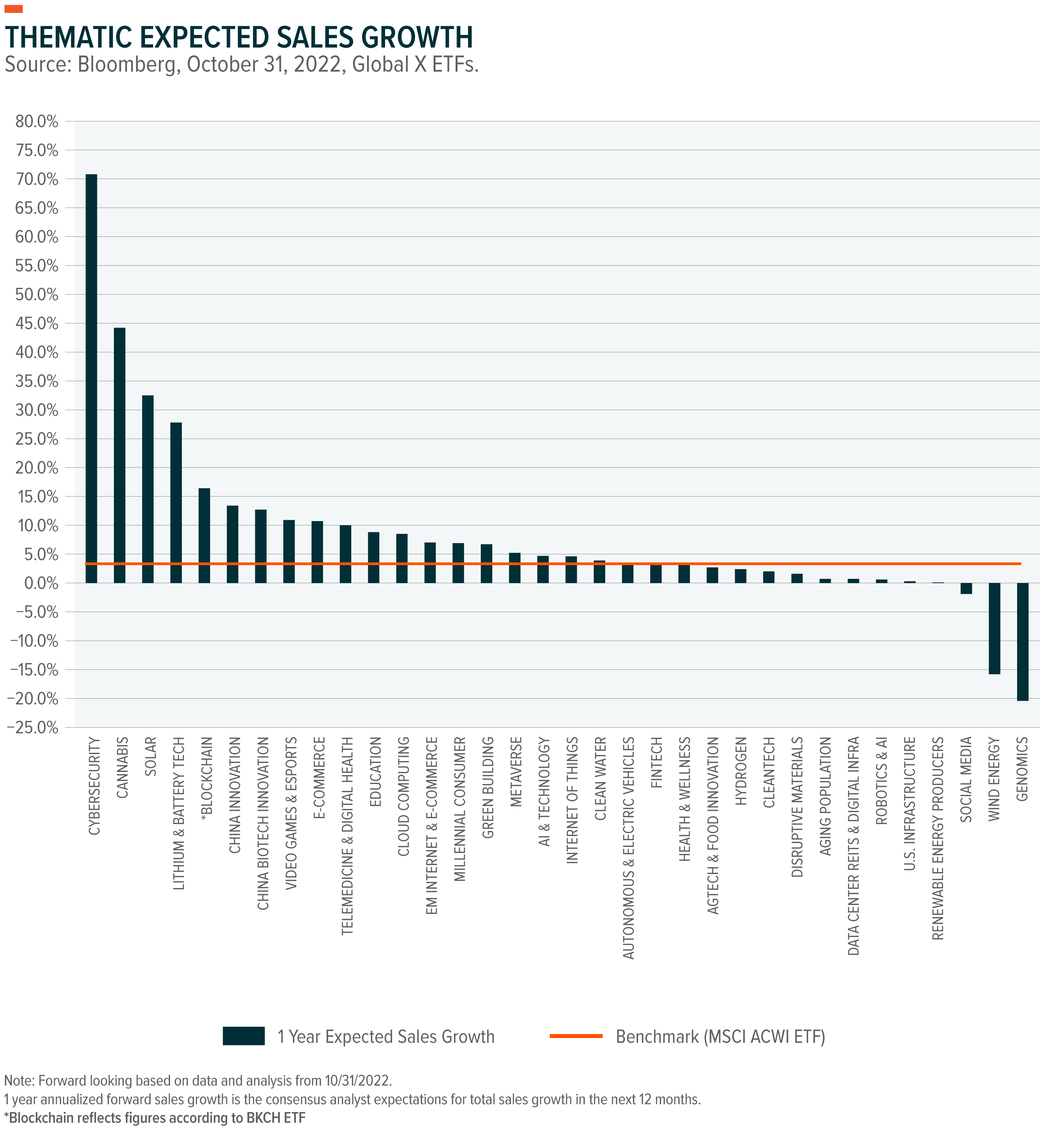 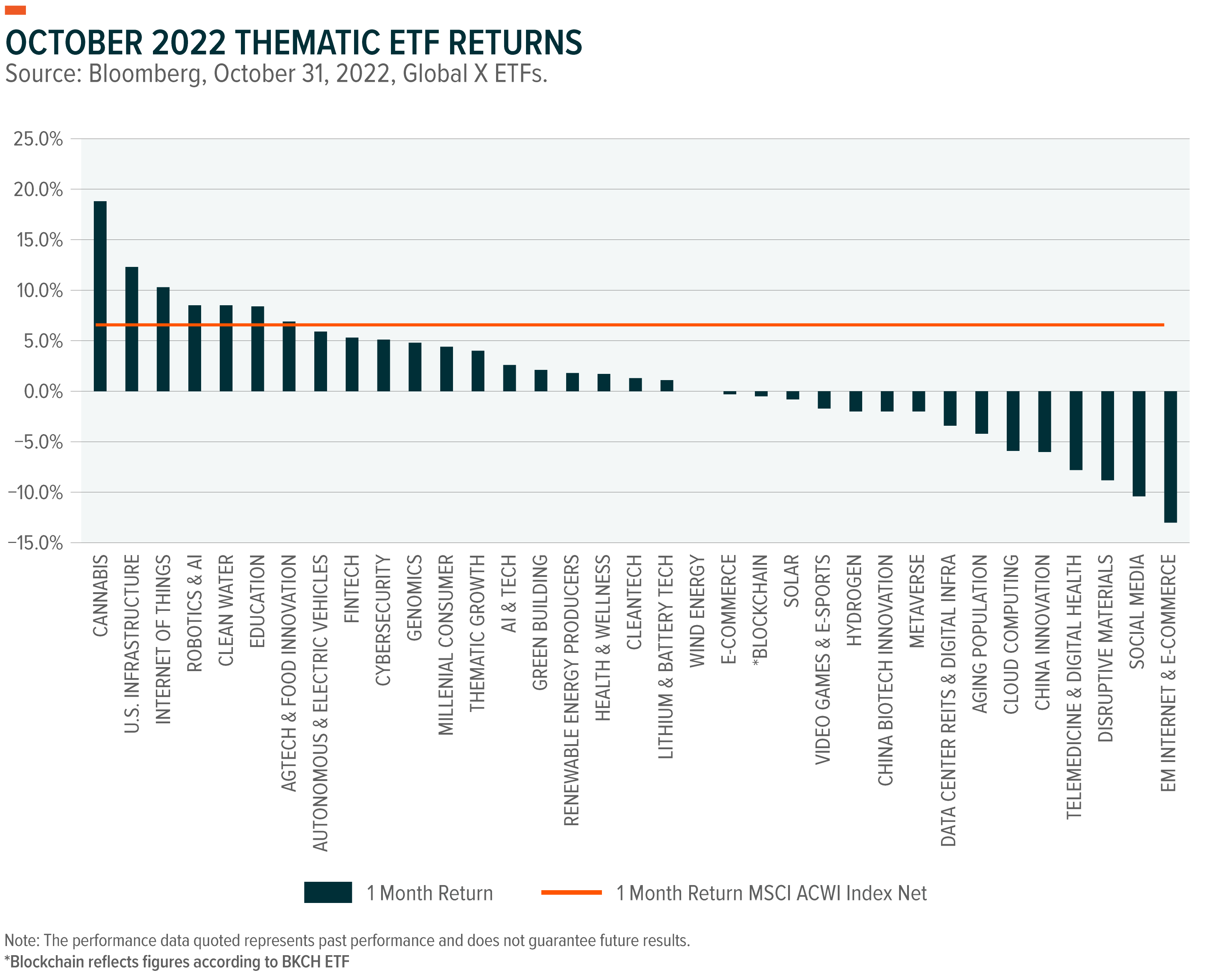 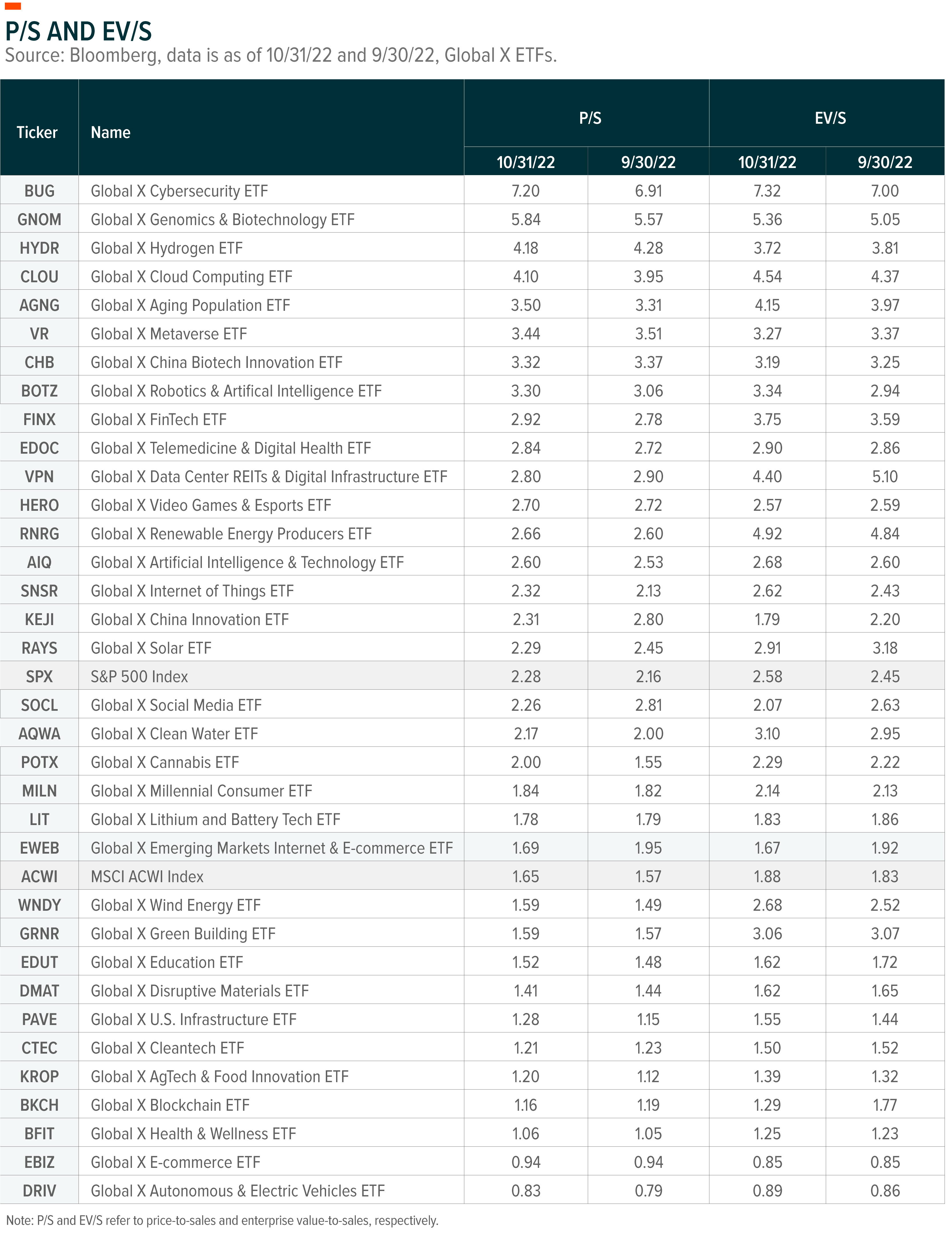 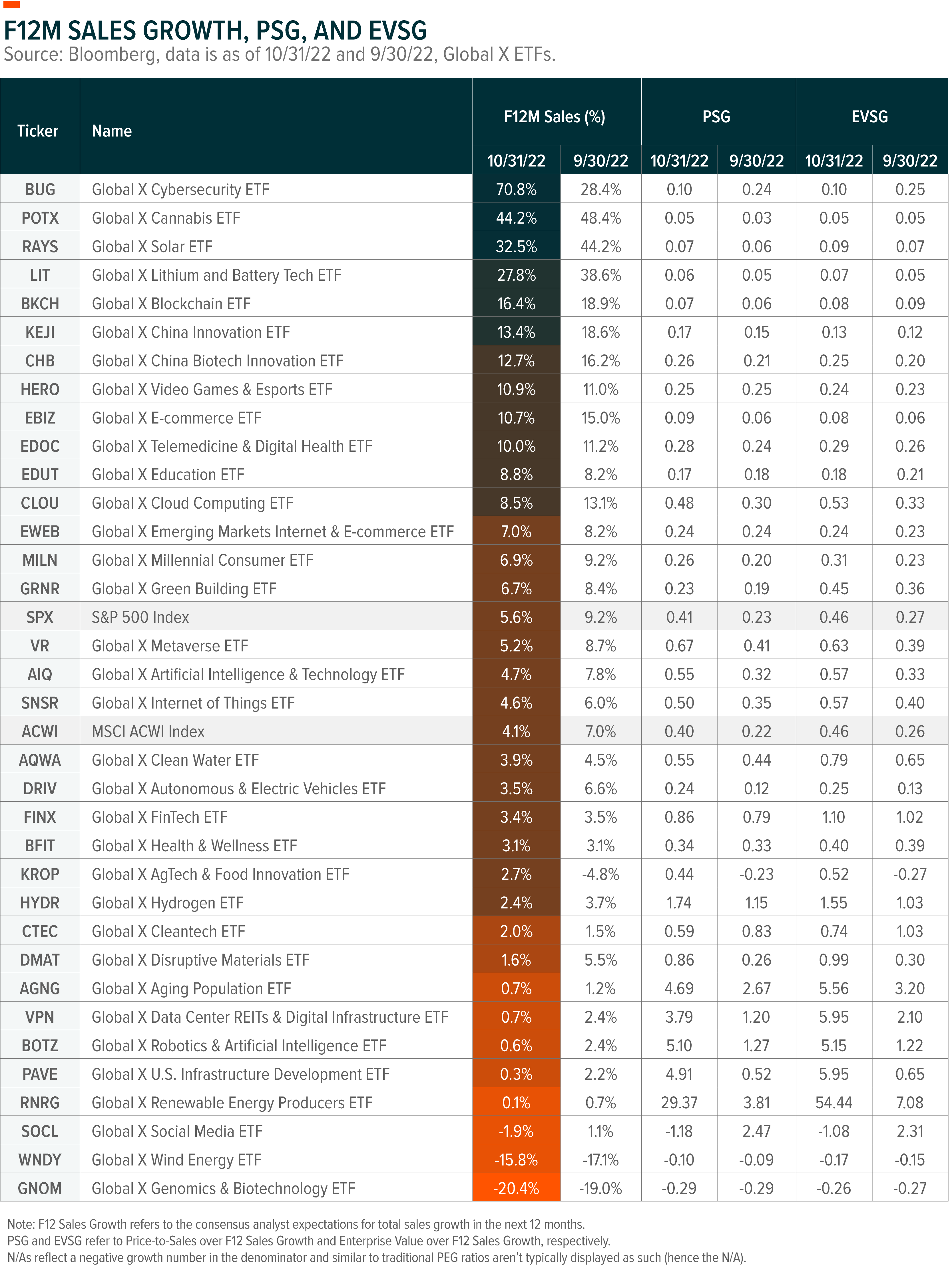 To see individual ETF holdings and current performance across the Global X Thematic Growth Suite, including information on the indexes shown, click the below links: 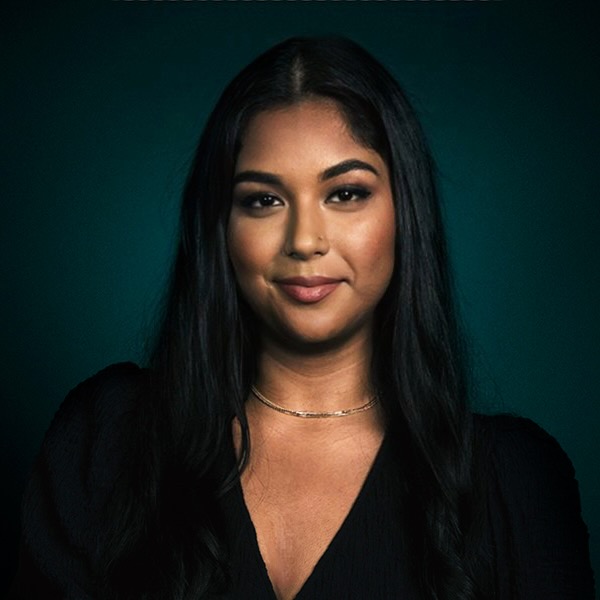 Investing involves risk, including the possible loss of principal. International investments may involve risk of capital loss from unfavorable fluctuation in currency values, from differences in generally accepted accounting principles or from economic or political instability in other nations. Emerging markets involve heightened risks related to the same factors as well as increased volatility and lower trading volume. Narrowly focused investments may be subject to higher volatility. The funds are non-diversified.

The companies in which the Funds invest may be subject to rapid changes in technology, intense competition, rapid obsolescence of products and services, loss of intellectual property protections, evolving industry standards and frequent new product productions, and changes in business cycles and government regulation. There are additional risks associated with investing in mining industries.

SOCL invests in securities of companies engaged in the social media industry. The risks related to investing in such companies include disruption in service caused by hardware or software failure, interruptions or delays in service by third-parties, security breaches involving certain private, sensitive, proprietary and confidential information managed and transmitted by social media companies, and privacy concerns and laws, evolving Internet regulation and other foreign or domestic regulations that may limit or otherwise affect the operations of such companies. The business models employed by the companies in the social media industry may not prove to be successful.

Companies within Genomics, Healthcare and Biotechnology sectors can be affected by government regulations, rapid product obsolescence, intense industry competition and loss or impairment of patents or intellectual property rights.